Jerry Joseph and the Jackmormons Kick Off NYE Run in Portland, OR with Impassioned Performance (SHOW REVIEW/PHOTOS)

Among an increasingly frustrated portion of the population, there is a sense that life must go on even if we are still living with the reality of the pandemic. For many, this feeling that goes beyond divisive politics comes from both risk assessment and a feeling of optimism that we can still venture out of our houses without dropping dead or spreading disease. Indeed, as bands across the country big and small have cancelled their final shows of the year due to yet another spreading variant, some are choosing to let the show go on even if that means adding a few more rules to keep people safe. With this backdrop, along with the icy aftermath of rare early-winter snowfall, Jerry Joseph and the Jackmormons soldiered on as they kicked off the first of their four-show New Year’s Eve run at Dante’s in Portland, Oregon on Tuesday, December 28th.

Jerry Joseph has long maintained something of a cult following in the Rose City, and it was clear that some of his most loyal fans braved the elements to make it out to Dante’s on Tuesday. Fittingly, he opened with the sprawling anthem “White Stag,” one of his most moving songs that also references an iconic landmark just a block away from the venue. Jenny Conlee of The Decemberists would sit in on keyboard for the show, and with this song she immediately laid down soulful organ sounds that would be a consistent highlight throughout the evening and add even more spirituality and depth to Joseph’s songs. Such a big opening tune could only be followed by a heavy rocker, which is what the band did when they launched into the Social Distortion-esque “Burn in Hell” only to up the ante with the grungy and sinister “Fastest Horse in Town.”

With a healthy dose of guitar shredding in their rearview, the band would stretch out with the older tune “Criminals in My Closet” that drifted from reggae to funk and showcased Joseph’s supremely talented rhythm section before dipping into the swaggering “Sparkle.” By this point, the band was firing on all cylinders and the crowd reciprocated by dancing along with end-of-the-world fervor. Following the heady gospel blues jam of “Eat My Soul,” Joseph would fittingly accent the dramatic, organ-heavy “Jump” with his take of U2’s “Until the End of the World” before dropping back into the tune and ultimately closing his set with the soaring rocker “Brother Michael.”

With so much energy and passion put into the two-hour performance, one couldn’t help but wonder what the band had in store for the rest of the run. For Joseph and co., it felt like they were making up for lost time and playing as if they might not get a chance to play again. In these uncertain times of cancellations, postponements and fear, that could become reality in a minute. Luckily, the band was able to savor this moment and deliver a searing set of monumental rock and roll, sending a refreshing reminder that Jerry Joseph continues to be that rare combination of incredible songwriter and rock guitarist. 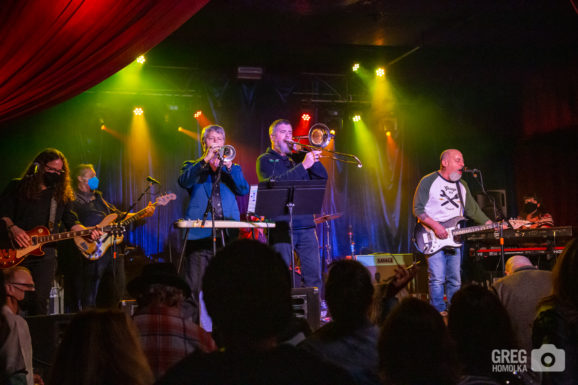