With thousands of screaming fans shaking Little Caesars Arena in Detroit on February 28th, Tyler, the Creator staged his most ambitious live show yet as part of the “Call Me If You Get Lost Tour.”

The last time Glide covered Tyler, the Creator was at his standout headlining spot at Outside Lands. This time around, the rapper proved that he could still up the ante: more fiery pyrotechnics, more dynamic set-pieces, more command of a rapt audience.

Here are five memorable moments from the show:

A trio of openers helped get the crowd hyped leading up to Tyler, the Creator’s headlining set. Teezo Touchdown kicked things off with a buzz – literally, as he wielded a chainsaw. He leaned into the construction theme of his set design by awarding the “hardest hard hat” to the fan going the wildest in the crowd. Next up, Vince Staples took the arena by storm from the B-stage, where he deftly engaged the audience in all directions. He memorably closed his set with his hit “Norf Norf” to loud cheers from the audience, accentuating the “I ain’t never ran from nothing but the police” chorus with an alternating red and blue lighting motif. Kali Uchis’ arrival on stage was heralded by a wave of fervent screams that closely matched Tyler, the Creator’s reception. The singer impressed with her hits like “Dead to Me,” “i want war (BUT I NEED PEACE)”, “After the Storm,” and “telepatía,” as well as her tight choreography with her backup dancers.

As the house lights went dark, a massive wave of screams rippled through the eager crowd. The audience got an immediate sense of the grandeur of the set from the get-go, as Tyler, the Creator rapped “SIR BAUDELAIRE” from the roof of a 1939 Rolls Royce Wraith. Behind the car, there was a huge, two-story house facade. As he exited the vehicle, he strafed across the stage, illuminated by the flash and crackle of fireworks on “CORSO.” And then on “LEMONHEAD,” he ascended the house’s staircase, rapping from the balcony over the track’s propulsive beat while the crowd jumped along.

For the smooth jam “WUSYANAME,” Tyler, the Creator hopped in a huge boat, which drifted from the main stage to the B-stage. When it docked in the middle of the general admission crowd, the rapper shifted gears to some of his older material.

“I’m guessing a quarter of you wouldn’t mind if I went back in my discography,” Tyler, the Creator commented to the crowd. Judging by the fierce roar, it was closer to 100% approval. While on the B-stage, he rumbled through some of his biggest earlier hits. Standouts included his call-and-response with the audience for “911,” the huge singalong (with some Detroit-centric ad libs thrown in) on “See You Again,” and the stark beat of “Yonkers.” This phase of the set ended with “Tamale,” as the arena bounced along to the rapid-fire beat.

After “Tamale,” Tyler, the Creator hopped back in the boat, which slowly set sail back towards the main stage. At a couple points en route, the boat paused, allowing him to croon “I THOUGHT YOU WANTED TO DANCE” to the crowd, showing off his vocal chops. As the boat rocked back and forth, the excellent set design helped give the illusion that Tyler, the Creator was floating on a sea of undulating arms raised by exuberant fans.

Upon returning to the main stage, Tyler, the Creator stood still, with pulsing lights and the accelerating instrumentals amping up the audience toward “Who Dat Boy.” As the track was unleashed, plumes of fire shot up behind Tyler, the Creator, and the crowd exploded to one of the most energetic songs of the entire set.

On the penultimate track “NEW MAGIC WAND,” Tyler, the Creator explained this as his “favorite song”: “It has a lot of the elements of why I like making music – melody, harmony, the drum goes hard. … It’s more feeling than trying to be good.”

He headbanged with such ferocity that he ended up sprawled on the floor. As the track surpassed its halfway point, it broke down into a discordant beat punctuated by harsh strobe lights. As the song kicked back in, Tyler, the Creator was once again illuminated by plumes of flames.

The set fittingly closed with the triumphant “RUNITUP.” As the crowd eagerly sang along one last time, Tyler, the Creator urged them to get louder. More fireworks shot up on stage as the fans bounced along with each of Tyler, the Creator’s jumps. And with that, he took a deep bow, then picked up two suitcases and walked through the front door of the house facade.

The entire set ran for a pretty tight hour and 20 minutes. While the crowd would’ve devoured more songs, the fact that there was no encore worked in terms of the show’s overall journey: “Here today, but gone tomorrow / We gon’ run it up.” 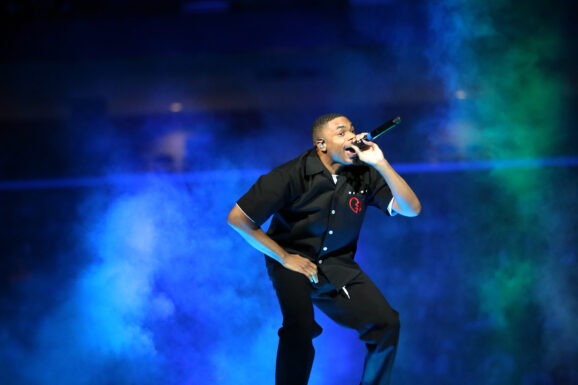