When you add up the respective years that Ministry, Melvins, and Corrosion of Conformity have been playing, the sum is a rather mind-blowing 120 years. It might stand to reason, then, that at least one of these bands should be slowing down. Eventually, the energy should wane, right?

Each a pivotal player in the early ‘80s anti-pop revolution, they’ve outlived many of the bands for whom they paved the way, and they’re still releasing albums and playing shows that keep stalwart fans coming back for more and new listeners finding themselves hooked and hungry.

The three bands joined forces for the Industrial Strength tour in 2022 and took the stage at the famed Orange Peel in Asheville, NC on March 20, playing to a sold-out crowd. From Corrosion of Conformity’s thunderous start to Ministry’s frenetic encore, there was nothing at all to indicate that any of these performers will be running out of steam any time soon.

The Orange Peel has a way of feeling full to the rafters even when it’s not at max capacity, and this stop on the tour had the venue busting at the seams. Prior to the start of the show, fans gathered on the smoking deck outside, squinting into the sunlight and reminiscing about show’s past. This was an early show, and the steady stream of voices from the tourist passers-by almost seemed intentionally placed, sampled against the backdrop of the dark and pounding house music from inside.

Originally hailing from just a couple of hours away in Raleigh, Corrosion of Conformity launched into their set with little preamble and fury that reminded newer fans that these guys started out as an angry hardcore punk band before settling into their unique southern-tinged brand of metal. Make no mistake, this isn’t your typical 21st-century southern radio rock; rather, this is the kind of metal that sounds like sitting in your living room with your closest friends, talking politics and religion and the fallacies therein, alternating Sabbath and Black Flag on the stereo while a hot summer breeze blows the scent of the tobacco fields in through the windows, blending with the sweet smell of herb.

Their set traversed the decades of their career and included an absolutely brutal rendition of “Paranoid Opioid,” pushing the already amped-up crowd into a frenzy. And while the music was nonstop wide open full speed ahead, the men on stage were clearly not in any hurry to be done. There was an ease about the way they interacted with the crowd that made it feel like they were just a bunch of guys hanging out, playing music for their friends, and their appreciation for the crowd seemed genuine. These are guys who either really still love what they do or are really good at faking it, and the latter seems highly unlikely.

There’s faking it, and then there’s staying in character, and anyone who’s seen Melvins live knows what to expect when Buzz Osborne and co. take the stage. Buzz is larger than life with his trademark hair and long black robes; Steve McDonald is a gleeful and brilliantly talented showman posing for the crowd and having a blast playing the consummate rock star with his tongue planted firmly in his cheek; and then there’s Dale Crover, the guy who in theory hides in the back behind his drum kit, but holy shit.

Holy absolute shit, Crover carried Melvins’ performance to a higher level and kept it there throughout the set. There were times he played with such intensity that the sound seemed almost visible, bouncing off the stage and into the crowd. This wasn’t just bashing away at the skins, though: Crover has a melodic way of playing that seems like it should be counterintuitive to the force therein, and his drums harmonize with the bass, guitar, and vocals in a way that’s rarely seen. It’s one of the things that make the Melvins’ sound so distinct, while beautifully defying the idea that a band is destined to repeat themselves and settle into a prescribed noise routine after so many years. It was this defiance that led the band to record an album of acoustic versions of many of their songs – not just any album, but a four-LP album spanning two and a half hours.

When Glide asked Osborne what inspired the undertaking, there was a shrug in his voice as he replied, “We hadn’t done it yet. And we figured, if we’re going to do it, let’s do not a two disc, not a three disc, but a four-disc album. Why not?”

In that same interview, Osborne mentioned that the most important thing about making music is not to look at what everyone else is doing and try and do the same thing but to figure out what you love and do your own thing. The band’s adherence to that philosophy was as evident as the crowd’s appreciation for it, and classics from the early days, like “Hooch” and “Honey Bucket,” were as well-received as their brand new song, “Never Say You’re Sorry” from their January 2022 EP, “Lord of the Flies.” And while there may not have been anything in the Melvins’ set that broke new ground, it was still a stellar show.

The energy was palpable as fans waited for Ministry to start their show. A chain-link fence went up at the front of the stage, and the screen at the back held a projected image expressing support for people in Ukraine. There was an urgency that aligned with the message of the band’s most recent album, “Moral Hygiene,” on which Al Jourgensen and co. plead with society to get their shit together and make some positive changes. By the time the band hit the stage the crowd was pulsating along with the strobe lights that flanked the fence, and “Breathe” was the perfect choice to kick things off. Jourgensen’s chorus of “Breathe, you fucker!” was a necessary reminder as the band plowed through four decades of pure industrial power.

In addition to original favorites like “Thieves” and “Burning Inside,” Ministry pulled out a few exceptional covers as well, including “Don’t Stand in Line” and “Man Should Surrender,” both originally done by Pailhead, the side project of Jourgensen and Ian McKaye of Minor Threat. The intensity of the show never let up, and Jourgensen was as engaging as ever even behind the fence. From the mohawked kids to the grey-haired grandpas, nearly everyone in the audience seemed to be wrapped up not only in the sound, but in the message.

The only two songs Ministry performed from “Moral Hygiene” were saved for the encore, and when the canned voice started chanting “How concerned are you?” like some overmedicated Stepford wife at the beginning of “Alert Level,” the audience sprang back to life as if the floor had suddenly become electrified. Nothing slowed down as they moved into “Good Trouble,” and with the fence having been removed, there was easy access for a singalong call and response with the audience and Jourgensen.

The night ended with a cover of “Search and Destroy” by Iggy and the Stooges – an appropriate song to wrap things up, the culmination of a show by three very different but equally innovative and inventive bands. Industrial Strength tour indeed – these guys aren’t going anywhere, and the music world’s a better place because of it. 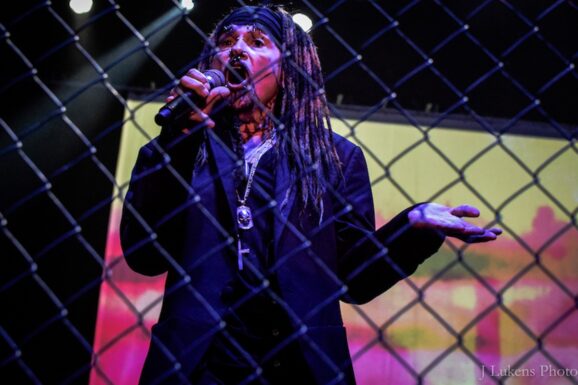