FREAKONS has delivered a self-titled, stirring studio album combining Midwestern Americana/folk with the English/Welsh traditional tunes, all based around soot-covered coal songs.

The project combines two bands as Freakwater’s Janet Bean and Catherine Irwin join forces with The Mekons Jon Langford and Sally Timms. Both outfits have been running in the same punk/alternative/folk circles for decades now and these songs go back even longer as mid-1800s odes about strikebreakers, World War One laments and other tales of woe from the coal industry unites the album. The coal vein that stretches under the Appalachians through to Wales connects these seamlessly disparate locations and the players embody that; acoustic guitars, fiddles, humor, horror and harmonies ring throughout.

Opening with “Dark Lords Of The Mine” the band works out the vocals and down strums around lyrics taken directly from a Richard Burton interview with Dick Cavett from 1980 about mining that sets the tone. Gorgeous vocals and violins deliver stirring lines on “Chestnut Blight” and “Judy Belle Thompson” while “Canaries” goes back to the war to end all wars and uses percussion and stirring lyrics to paint a vivid haunting picture of the miners, mines and their dangers.

Death, earth’s destruction, and lost love either are at the forefront or lurking just under the surface of these songs like the coal that links them all. Helping out on strings and vocal harmonies are Jean Cook and Anna Krippenstapel while Jim Elkington pitches in with guitar. Standout gems are a powerful waltzing version of Hazel Dickens “The Mannington Mine Disaster”, “Abernant 84/85” which is a reworking of a Mekons track and  “Blackleg Miner” a 19th century English folk song dedicated to destroying any miner who breaks the strike.

The most disjointed offering is “Phoebe Snow” which runs on too long with grating guitars, feedback, and other off-putting noises clanging together like the cacophony of a working coal mine. The album wraps up with a few shorter, more successful numbers (“Never Thought I’d See The Day”, “Dreadful Memories”) a Gaelic lullaby (“Coorie Doon”), and a strong finale (“Blue Scars Of A Miner”).

This self-titled record manages to scuff up the Freakwater sound with coal dust and slightly polish The Mekons’ rough edges, delivering a vibrant album dealing with climate change, worker exploitation, and fossil fuels. It is sad that some of these songs were written over a hundred years ago and are still so pressing today. 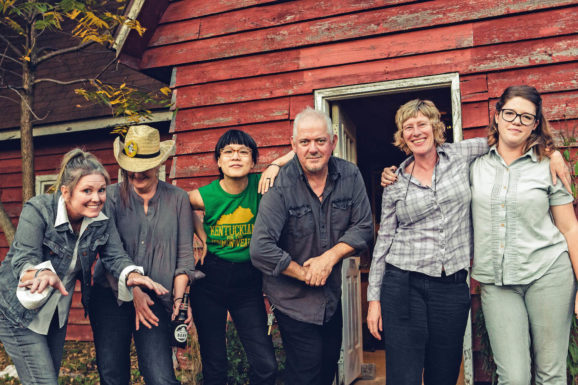