Three veteran rock bands took over Hard Rock Live in Orlando on Wednesday night, each delivering a distinct twist on head-banging music. North Carolina quartet Corrosion of Conformity kicked off the night with a blistering set of mostly uptempo rock. To start, bassist Mike Dean took the stage by himself and played the rumbling baseline of the instrumental “Bottom Feeder.” The rest of the band then joined him and plowed through that song and other selections from the band’s 38-year history.

Corrosion of Conformity started as a hardcore punk band before adopting a darker metal sound. The set was mostly fast songs, like the thrasher “Paranoid Opioid,” with a few slow sludgy numbers, like the trudging “Shake Like You.” Pepper Keenan’s distinctive deep vocals and bottom-heavy guitar tone anchored the songs.

After a powerful rendition of “Wiseblood,” C.O.C. ended the set with its two biggest hits, both off of 1994’s Deliverance. First came “Albatross,” an infectious combination of Black Sabbath-style riffing and sing-along choruses. After that, they ended with “Clean My Wounds,” featuring Keenan’s outstanding staccato palm-muted riff. Though C.O.C.’s mix was a bit off, with the drums and bass often drowning out the guitars, the band’s hefty rhythms delivered plenty of great moments.

Seattle alt-rock pioneers Melvins followed with a fiery set of aggressive rock. With his trademark robe and afro, Buzz Osborne was a commanding presence onstage. The riff-master tore through licks from incredibly fast to unnervingly slow on his translucent guitar, backed by Dale Crover’s pounding drums and propulsive bass from Steven McDonald. Songs like “Queen” showcased Melvins’ knack for disruption, with a slow, sparse verse that was just waiting to explode until it did in the chorus.

The great thing about Melvins’ shows is that with 25 albums and no obligatory hits, every show is different. The setlists vary greatly and draw from 35 years of material. But whatever they play, fans are treated to the band’s trademarks — odd time signatures, crunching guitars, off-kilter rhythms, and dynamic shifts between loud and soft, fast and slow. From the plodding drone of “Never Say You’re Sorry” off the new Lord of the Flies EP to the rapid-fire thrash of “Evil New War God,” the band stretched the limits of heavy tempos.

The best part of the set came near the end with two songs from 1993’s Houdini. A brief Crover drum solo led to the “Hooch,” featuring one of the band’s best and most distinctive choruses. That led directly into the frenetic “Honey Bucket,” one of the band’s fastest songs. At the end of the set, Melvins induced a wall of feedback and let it screech and hum for a couple of minutes.

After two great performances, Ministry had tough acts to follow. The six-piece band played most of the show behind a chain-link fence. That, combined with a dazzling light show, made for an interesting experience that sacrificed intimacy for grimy industrial showmanship.

Al Jourgensen prowled the stage, gripping and hanging from the fence while unleashing guttural screams. Drummer Roy Mayorga was a highlight of the set, with a bludgeoning attack that kept the moshers and dancers going even when the songs got repetitive.

That was the biggest weakness of Ministry’s set. Most songs were fast and angry with a lack of melody, Jourgensen screaming repetitive lines over a propulsive rhythm, and the same ultra-distorted guitar tone, all buttressed by backing tracks of vocal samples.

Jourgensen introduced most songs by name, which were almost entirely old songs from the first few albums. In fact, prior to the encore, Ministry didn’t play a single song more recent than 1992. The performance leaned heavily on 1989’s The Mind Is a Terrible Thing To Waste — including the set-opening “Breathe” and the vicious “Thieves” — and 1988’s The Land of Rape and Honey.

In addition, they played four covers, including two from Jourgensen’s side project Pailhead, “Don’t Stand In Line” and “Man Should Surrender.” A cover of Black Sabbath’s “Supernaut” that added dance grooves to the classic Tony Iommi riff made for one of the band’s best performances.

“So What” ended the regular set. While the band waited backstage, roadies removed the chain-link fence from the stage. Ministry then returned to the stage, for the first time having nothing separating them from the crowd. “We played a bunch of old stuff, so now here’s some new stuff,” Jourgensen said.

The band then played two songs from last year’s Moral Hygiene, which sounded much different from the old songs. “Alert Level” thrived on a loud/soft dynamic and was the first song of the set to feature soft, melodic verses. The following song, “Good Trouble,” also had softer verses that burst into a volley of power chords and kick drum. For the final song, Ministry went with another cover — “Search and Destroy” by Iggy and the Stooges.

It was a wild night for three unique bands with a combined 112 years of music, though the music still sounded fresh and the bands still had the intensity and chops to keep going for another decade or so. 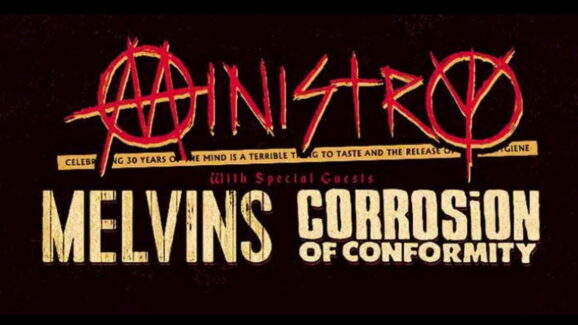