If there’s one thing the lauded electro-funk quartet Pigeons Playing Ping Pong want to impart to their listeners, it’s that life truly is precious, so you might as well enjoy the hell out of it while you can. That “live life to the fullest” ideology is more than evident during their infamously raucous live performances, and it certainly carries over to the group’s latest studio effort, Perspective.

“When touring shut down in 2020, we gained immense perspective,” admits lead vocalist Greg Ormont. “The album title speaks to the perspective of the pandemic as well as our growth over the years. During this turbulent time, everyone in the world has been forced to look in the mirror and ask what’s truly important. If there’s anything we’ve all gained from this, it’s perspective, and a recurring theme from our band is to not waste time. Now more than ever, we recognize that you only get one life, so you might as well live it to the fullest and lift people up in the process.”

The Baltimore-area group has unquestionably made the most of their time since their humble beginnings in the mid-2000s at the University of Maryland. Going from gigs in cramped dorm rooms and dingy basements to becoming one of the country’s premier touring acts, armed with an impressive resumé of venues played nationwide, including legendary locales such as Red Rocks Amphitheater, as well as becoming mainstays on the summer festival circuit, with the band hosting their own annual wildly popular multi-day blowout, Domefest.

Perspective, the quartet’s sixth studio LP, and first full-length project in over two years is arguably their most earnest studio output to date, featuring an eclectic mix of old & new material that “The Flock”, as their most ardent fans are affectionately referred to, will almost assuredly revel in, but may not do much to win over new listeners. While the album certainly does a fine job of showcasing the group’s undeniable musical talents, it is ultimately hindered by some vocal performances that, quite frankly, sound like a bad parody of what people who don’t listen to jam bands think jam bands sound like.

The LP’s opening track, “Elephante”, starts off on an auspicious note thanks to the authentic 70’s-style sound provided by the horn section from the Nashville-based funk-rock outfit Here Come the Mummies but is quickly marred by Ormont’s vocal delivery, unfortunately diverting the listener’s attention away from some serious chops by the rest of the ensemble.

Thankfully, “Elephante” is the worst offender among the dozen tracks as the vocals become more palatable throughout the remainder of the album, starting with “Move Like That”, a relatively new song that charms with a welcoming Daft Punk vibe and is boosted by some lively percussion-work courtesy of a cameo from Jason Hann (String Cheese Incident) before culminating with a warm guitar solo from lead guitarist Jeremy Schon.

Not enough can be said about Schon and his remarkably imposing fret-work, both in the studio and particularly when performing live. Schon’s sense of musical adventure and ingenuity are the primary catalysts for many of Pigeon’s extended jams, firing off lengthy runs that are teeming with top-drawer melodies and a driving sense of purpose that often result in some awe-inspiring climaxes.

“Lost in Line is”, a newer playful number that, once again, starts off strong but ends on a slightly odd, although somewhat endearing, note thanks to a vocal section that was seemingly inspired by the Sugarhill Gang’s “Rapper’s Delight” precedes one of the LP’s more potent offerings, “Sir Real”.

The album’s longest track, “Water”, clocking in at just over six-and-a-half minutes – a stark contrast from its live counterpart, which regularly extends past the ten-minute mark – is buoyed by some impressive on-the-fly tempo changes from drummer Alex “Gator” Petropulos that carve a path towards another climactic solo from Schon.

The string of relatively robust material continues through the record’s latter half thanks to songs like “Su Casa”, a futuristic piece with swelling guitar lines over the top of some tasteful synth-work, and “Distant Times”, which features a breezy melody that eventually leads to an atmospheric electronica-infused jam.

Perspective comes to a satisfying conclusion with a trio of numbers that arguably includes the album’s standout moment, “Whirled”, a horn-infused funky instrumental that masterfully transforms into an all-out dance party followed up by the Caribbean-esque “Beanstalk”. The album’s concluding track, “Indiglo”, a decade-old fan favorite with introspective lyrics, features a guest appearance from ALO’s Zach Gill, whose velvety keyboards add a layer of warmth noticeably missing at times from their usual sans-keys lineup.

Despite its imperfections, Perspective still manages to offer up a mostly enjoyable experience thanks to its strong musicianship and danceable grooves. Brimming with optimism and a genuine focus on community, it’s clear that Pigeons Playing Ping Pong and their fans are having as much fun as anyone, which is all that really matters. 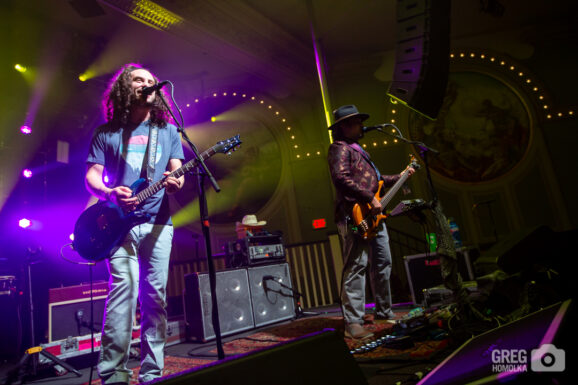