Tamara Lindeman, who records and performs under the moniker The Weather Station, took the stage at Brooklyn’s Music Hall of Williamsburg to a round of cheers, but as she knelt down center-stage – microphone in hand, head bowed – a hush quickly swept over the crowd until every rustling jacket and shuffling foot could be heard. Her gentle voice cut through the silence and captivated the audience with a striking acapella rendition of “Stars,” a contemplative ballad that asks the titular question of her latest album, How Is It That I Should Look At The Stars, a companion to last year’s much-acclaimed Ignorance. The lasting complications the pandemic has caused for touring musicians, especially international ones, have made touring behind those records sporadic, but after five reschedulings Lindeman was finally able to bring these songs to a New York audience, and with the help of her four-piece band they came beautifully to life.

As her voice reverberated out on the final lines of “Stars” the room was enveloped in a deep, floor-vibrating synth tone while drummer Evan Cartwright added impressionistic percussion flourishes until his count-off brought the rest of the band in on the Ignorance cut “Wear”. Starting off with a prominent bass groove the song settled into a swirling mix of piano and electric guitar arpeggios on its chorus while Lindeman paced the stage, looking out into the crowd with forlorn earnestly. Stripped of the strings and woodwinds laced throughout the album, the songs from Ignorance hit more directly than their studio counterparts. The more overt presence of guitar and bass lent tunes like “Separated” and “Tried To Tell You” a dark electricity, while the band’s subtle interplay, shifting dynamics and energy without ever overpowering Lindeman’s voice, had songs like “Loss” and “Better Now” sounding like introverted anthems.

While much of the set was devoted to the newer material, which included nearly all of Ignorance (including bonus tracks) along with two other songs from How Is It…, Lindeman did strap on her guitar midway through the night for a pair of older songs, “You and I (On the Other Side of the World)” and “Way It Is, Way It Could Be” off her 2017 self-titled record and 2015’s Loyalty respectively. The former building upon her sweeping chords into a fiery guitar solo from Will Kidman before quieting back down and transitioning into the reverb-soaked fingerpicking of the latter.

After a punchy rendition of “Heart” Lindeman left the stage as the band played a clattering of atmospheric noise, joined by Sam Amidon, who had opened the show earlier, playing a haunting violin. The noise soon took the shape of Ignorance’s standout opener “Robber” and Lindeman returned wearing the same mirrorball jacket she dons in the song’s music video, and let the lyrics spin out as if they had just come to her before turning to her electric piano and joining the band in an instrumental section that had Kidman and Amidon conjuring up a sonic squall over the moody piano and drum groove. The band closed out the set with “Atlantic” and “Parking Lot” before quickly returning to the stage for an encore that saw Lindeman duet with (guitarist) on “To Talk About” and deliver a spellbinding performance on “Subdivisions” before getting on guitar once more for the show-closing “Thirty”, a driving jammer from her self-titled album that featured another burning solo from Kidman.

While she mostly let her songs do the talking for her, Lindeman did take one moment in the show to reflect on “what we’ve all been through in the last couple of years.” “I really notice it [when I’m] driving around,” she stated solemnly, “we’ve all just been through so many shifts of consciousness and the narrative has changed so many times and I’m really grateful that we’re all still here. We all made it.” She explained how she is now trying to focus less on whether someone is “good or bad, but whether they’re open or closed” and related that to people’s attitude towards climate change. Later on, she also expressed her surprise and gratitude that Ignorance, a record she perceived as “weird and dark” had been “so embraced by the world”.

While The Weather Station may not be the most energetic live act around, anyone who finds themselves entranced by Tamara Lindeman’s writing and voice, and the moody folk- and jazz-rock she surrounds it with, could only walk away from their show satisfied. Without overplaying their hand she and her band conjure up magic; bringing the thoughtful melancholy of her songs to electric life. 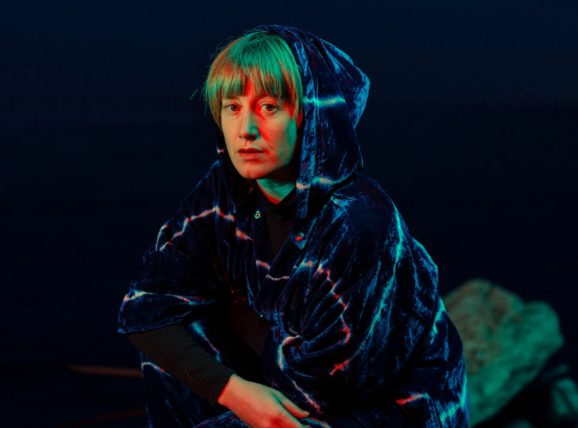