For going on three decades, the Icelandic band Sigur Rós has existed much like the island where they originate. Their music is sonically sparse and remote yet rich and complex all at once, existing outside the influence of many other kinds of music. Over the course of their lengthy career, the band has forged their own sound that can never truly be copied due primarily to the combination of unique instrumentals and the vocals of Jón Þór “Jónsi” Birgisson that are almost otherworldly. It has been nearly ten years since Sigur Rós released a proper album, and though their albums are all worth seeking out, the band has always been best experienced live. On a chilly Wednesday, May 11th, Sigur Rós brought their first tour in five years to the Moda Center in Portland, Oregon.

Between the stage setup, lights, and musicianship, what transpired over the course of two sets each coming in at over an hour was less rock concert and more art installation/performance. Since Sigur Rós’ lyrics are in the Icelandic language as well as their own invented Hopelandic language – which we can safely assume most U.S. audiences don’t understand fluently – the band’s performances are less about connecting to the lyrics than they are to the mood being created within each song. Opening with “Vaka,” the band immediately set the mood for what would be a more mellow first set with a slow, atmospheric build punctuated by Jónsi’s vocals flooding the music with emotion. Colorful string designs, glowing orbs, and a constant stream of fog that seemed to mimic the volcanic landscape of Iceland enhanced the music, with songs like “Samskeyti” showcasing the full band playing various keyboards to create a climactic dreamscape and “Svefn-g-englar” bubbling to the surface with its submarine sounds and Jónsi’s monumental chorus. “Ný batterí” would be prefaced by a stormy and ominous introduction with loads of feedback and the band portrayed in flickering black and white lights before basking the audience in white light and a soothing bass line. This would give way to massive drums and ultimately one of the heaviest rocking moments of the night before the hauntingly orchestral new song “Gold 2.” The band supposedly has a new album coming this year, but they would mostly stick to their earlier albums for this show with a few exceptions.

Set two would find the band rocking harder right out of the gate with the dreamy march of “Glósóli,” only to ramp it up with “E-Bow,” an aptly titled song that served as the perfect showcase for Jónsi’s signature style of playing his guitar with a bow. Though it may be an overstatement to associate Sigur Rós with any kind of rocking, their set in Portland was proof that they can craft the kind of sprawling songs that, while seemingly calm, manage to pull forth the same emotional response in the listener as a soaring arena rock song. “Sæglópur” would show their chemistry as a band, with the members gathered in a small circle to each contribute to the song’s lonely psychedelic beauty before unleashing a hair-raising crescendo. Similar moments would surface during “Gong,” “Andvari,” and “Festival,” with each song layering textures to create a sweeping sense of suspense and drama.

Ending with two of their most powerful songs – “Kveikur” and “Popplagið” – the band gave the audience a cacophony of lights and crashing instrumentals that bordered on spiritual to conjure the feeling of walking towards a great white light. Sigur Rós kept the tide swelling until the very end for an enraptured audience who seemed in awe of every moment, collectively reminded that their style of ambient and moody post-rock still exists on its own island of originality almost three decades later. 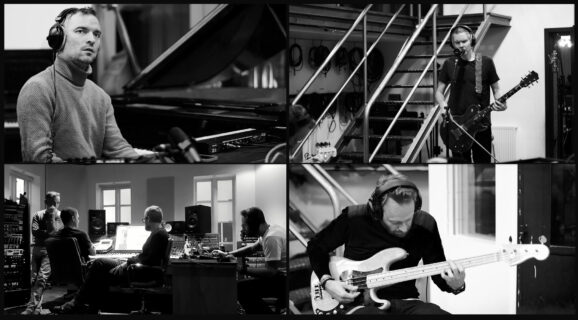