On this new album, Dehd leans slightly away from the bright guitar rock of their previous releases, in favor of an only slightly less bright guitar rock. It’s a good record, one that demonstrates the depth and purpose of the band beyond just warm vibes, but the best moments come when Dehd splits the difference. “Empty in My Mind” may not be as infectious as “Bop”, but it works as more than just the sum of its parts, combining the melancholy of its longing with an expertly and deceptively balanced verse, chorus and bridge, and is just as catchy as anything that came before it.

Wilco – “Tired of Taking It Out on You”

Not exactly the return to country some were hoping for, instead Cruel Country is the kind of country most Wilco fans want, which is really closer to Wilco than it is Uncle Tupelo. Don’t be mistaken, Cruel Country is a late-career highlight, and along with 2019’s Ode to Joy, the band is on quite a run. At 21 tracks though, there’s a lot to digest, and the spectacular “Tired of Taking It Out on You” ends up lost in the woodwork as a result. As far as Wilco love songs go, “Tired” works as so many of them do, by combining its frank simplicity with the nuance of its emotions. Jeff Tweedy lays out those emotions one by one, with anger, guilt, and love all wrapped up in one lament.

Stars are far enough removed from their heyday to make this an easy-to-miss release, and for good reason. On a weak day for new music already though, it’s worth noting that From Capelton Hill does have at least one highlight. “Palmistry” works on one level just because of Torquil Campbell and Amy Millan’s innate chemistry, but then again that chemistry doesn’t do much to save the rest of the duds on this album. On another level though, “Palmistry” works because of its vulnerability, and the confidence in writing a straightforward song about something obvious like love and insecurity, and the “take my hand” double meaning doesn’t hurt either.

Maria BC – “Good Before”

This is the kind of hushed and spacey folk music that Grouper and Haley Heyndrickx deploy, a kind of folk for people who normally don’t like folk music, but luckily for people who do to. Take “Good Before” a song as measured and effective as possible, playing with the space between notes and making the most of every bleated vocal development. What works best though is when that ambiance turns to aggression and in its own way, pushes the hypnotic, Hejira-like ballad towards a very specific kind of dramatic closure.

This bedroom pop duo owes a lot to Alex G, as so many in that genre do. Whether it’s their pseudo-home recording origins or their layered harmonies, Charlie Martin and Will Taylor find a lot of room to work within G’s established and expressive sound. But Hovvdy also pushes that sound further into pop than G ever does, and on “Town” the two demonstrate the restraint needed to sell a song that’s both this sentimental and this catchy with that effervescent charm. 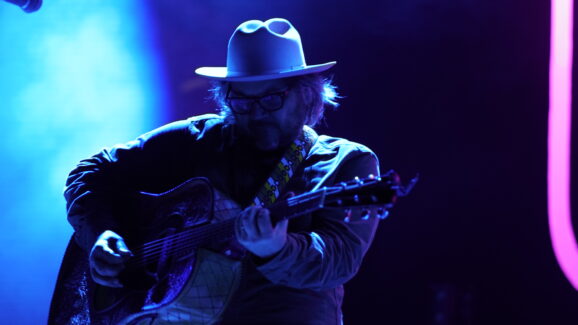