After teasing their first new music in over nine years, the Yeah Yeah Yeahs are officially back with a new album and single to share with the masses. Karen O, Nick Zinner and Brian Chase announce today their fifth studio album, Cool It Down, will be released on September 30th via Secretly Canadian and features cover photography by Alex Prager. The eight-track collection is an expert distillation of the band’s best gifts that impel you to move, cry, and listen closely and is bound to be a landmark in their catalog.

To punctuate this news, the band has shared the album opener and first single from the record, the Dave Sitek-produced “Spitting Off the Edge of the World” feat. Perfume Genius, which they premiered with Sirius XMU. The haunting and powerful song is cocooned by the interplay of Karen O and Perfume Genius’s immediately recognizable vocals. The lyrics reflect on the state of the environment, and the need for honesty about the damage we’re doing to the Earth. Karen explains, “I see the younger generations staring down this threat, and they’re standing on the edge of a precipice, confronting what’s coming with anger and defiance,” she says. “It’s galvanizing, and there’s hope there.”

Perfume Genius also co-stars alongside Karen in the visual for “Spitting,” as an avenging angel limo driver to her desert rebel queen. The visual was directed by longtime YYY’s collaborator, Cody Critcheloe (aka Ssion), who designed the artwork for Fever To Tell and also directed Perfume Genius’s amazing “Queen” video.

“To all who have waited, our dear fans, thank you, our fever to tell has returned, and writing these songs came with its fair share of chills, tears, and euphoria when the pain lifts and truth is revealed. Don’t have to tell you how much we’ve been going through in the last nine years since our last record, because you’ve been going through it too, and we love you and we see you, and we hope you feel the feels from the music we’ve made. No shying away from the feels, or backing down from what’s been gripping all of us these days. So yes we’ve taken our time, happy to report when it’s ready it really does just flow out,” says Karen O.

“The record is called ‘Cool It Down’ which is snagged from a lesser known Velvet Underground Song. I told Alex Prager whose photo graces our record cover that her image speaks to sweeping themes in the music and sums up how I, Karen, feel existentially in these times! But there’s always more to the story. This is how our new story begins, we present to you with heads bowed and fists in the air Spitting Off the Edge of the World featuring Perfume Genius.

Cool It Down tracklist:

Along with festival, UK and Australian dates, the band will play two soon-to-be-legendary shows in NY and LA this fall. They’ll perform October 1st, 2022 at NYC’s Forest Hills Stadium and October 6th at LA’s Hollywood Bowl. These must see shows will be joined by The Linda Lindas and special guest TBA in NYC, and Japanese Breakfast and The Linda Lindas in LA. Tickets are on sale now.. Visit yeahyeahyeahs.com for more information. 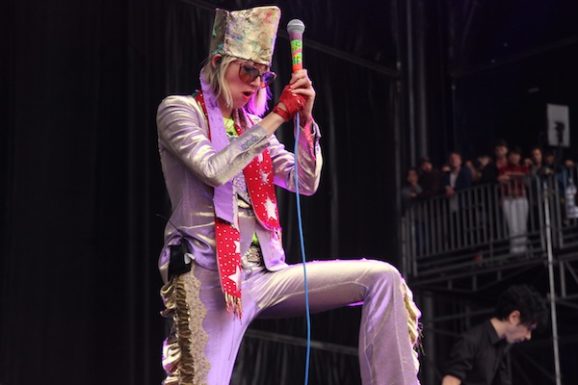