Stretching back more than two decades, Calexico has explored the musical connections between Latin America, the Caribbean, and Europe with each new album. Of course, this has all been done with the Southwestern cool created by Joey Burns and John Convertino, who married a sort of sparse rock sound that seemed to capture their beloved Arizona landscape with a myriad of musical styles from around the world. On the band’s tenth full-length studio album El Mirador (REVIEW), they have moved to the border and beyond as they fuse Colombian dance music (cumbia), traditional Mexican folk (mariachi), Mexican country (ranchera), ballads (corridos) and more into the larger Calexico sound. All of these musical styles are conducive to dancing and celebrating, and on Friday, June 3rd, the band brought the party to Portland, Oregon as they kicked off their North American tour at Revolution Hall.

Following a short opening set from trio The Hackles, whose harmonic folk ensemble of banjo, fiddle and guitar embodied the rugged beauty of the Oregon coast they call home, Calexico took the stage as a seven-piece band. Anchored by Convertino on drums and Burns on guitar and vocals, the band would lean heavily into material from El Mirador beginning the set with the title track and its moody psych-tango and following with the heavy funk of “Cumbia del polvo” with its mix of English and Spanish lyrics, edgy guitar, big percussion, and spooky organ. The band would switch gears to their catchier indie rock material with the older tune “Splitter” laced with a subtle touch of lovely mariachi style horns. “Falling From The Sky” continued in the rock vein with its bouncy rhythm and vibrant guitar flourishes. The band would take it back to their earlier albums during two standouts, laying down a mysterious and ominous blend of horns and accordion plus a fine standup bass solo on “Stray,” and dipping into a bossanova tango sound on “Inspiración.”

The band would continue to rachet up the energy as they progressed through their set and incorporated more older tunes, including the somewhat rare appearance of “The Black Light” played as a trio to highlight the dark and gothic dessert rock of their earlier albums. Another song off that 1998 album of the same name – “Minas de cobre” – would put the band’s love of Ennio Morricone-style instrumentals infused with surf rock on display. Burns was the ringleader and MC of sorts, encouraging his band members to cut loose and show off their musicianship on highlights like “Flores y Tamales” with its guitar line reminiscent of Malian rock and a big brash groove and trumpet solo that pulled crowd from their seats to dance along. The wild mariachi tune “El Burro Song” – with multi-instrumentalist Sergio Mendoza stepping out on accordion – would keep the crowd moving as they pushed through the energetic Love cover “Alone Again Or” before wrapping with the full-on cumbia dance party of “Cumbia de Donde.”

The band returned for an encore that started with second guitarist Brian Lopez giving the crowd some Neil Young-esque soloing on “Man Made Lake.” “Under The Wheels,” a song with a spicy dance beat and super funky wah wah guitar action, found most of the audience out of their seats and dancing before the band took it home with the brassy Hot Rail tune “Crystal Frontier.” Over the course of their ninety-minute set, the members of Calexico took their fans on a globe-trotting journey of musical stimulation. New songs may have made up a good chunk of the setlist, but this was welcomed by those who know that Calexico rarely releases a bad album. With the level of energy and tightness from the band, it was clear that, even after more than two decades making music, Calexico are still well worth seeking out. 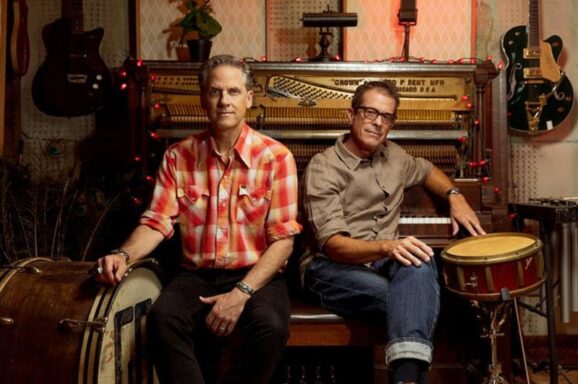