The Big Turnstile Breakthrough: Ranking The Punk Band’s Greatest Songs Prior To ‘Glow On’

Turnstile’s 2021 album Glow On has hoisted them to the top of the music industry as the reception of this record has garnered worldwide critical acclaim and launched a string of late-night TV appearances for the band along with a sold-out worldwide tour. Turnstile is not an overnight sensation, before their 2021 breakthrough the band released five other projects that all have their respected highlights. So how did Turnstile seemingly take over the music industry as they did? Where did this diverse yet grounded band come from?

Since Turnstile formed over a decade ago, 2010 to be exact, they have been releasing genre-bending Punk records and mixing in classic Hardcore Rock guitar riffs to create a sound that has not yet been replicated. The band is led by their multifaceted vocalist Brendan Yates, whose ability to switch between fast-paced punk vocals to a full blow crooning has skyrocketed Turnstile to the forefront of their peers. The band can also credit their in-your-face sound to lead guitarist Brady Ebert, drummer Daniel Fang , their rhythm guitarist Pat McCrory and bass player “Freaky” Franz Lyons.

Emerging out of Baltimore’s hardcore scene with 2011’s Pressure to Succeed the band quickly established itself as one of the more promising bands from the mid-Atlantic region. They were picked up by Reaper Records who released the aforementioned EP along with another EP Step to Rhythm and Turnstile’s debut album Nonstop Feeling in 2016. That same year the band moved over to POP WIG Records to release their terrific EP Move Thru Me.

In 2017 the band moved over to Roadrunner Records to record their 2018 album Time & Space. This was the band’s first release through a major label, a label they are still with to this day. Two years later Turnstile teamed up with electronic DJ Mall Grab for a three-song remix EP Share a View. These two projects show Turnstile allowing other genres to influence full projects as they start to integrate electronic music into their musical DNA.

That brings us to Glow On. While it is worthy of the major acclaim it got, that initial collection of records hosts some of Turnstile’s best songs. Glide has done the research for you and gathered Turnstile’s 10 best songs before Glow On.

This is the song that introduced Turnstile to the world. Track 1 off of their debut EP set the tone for the band’s unique approach to Punk and Hard Rock.

Coming in at track 3 off of Pressure to Succeed, “New Rules” shows just how clever of a songwriter Brandon Yates can be.

“Canned Heat ” came in blazing as track three on their 2013 EP Step to Rhythm. Although it is only a minute long, this song encapsulates the chemistry between Yates and lead guitarist Brady Ebert.

“Better Way” lands on the same EP as “Canned Heat” but has a completely different feeling. Turnstiles turn to fuzzy guitar sounds to create a great rhythmic instrumental.

This song has a special place in Turnstile’s discography. “Gravity” not only acted as the intro to Nonstop Feeling but also marked the band’s first use of a genre outside their roots with the use of record scratching to intro the song.

This song was made to be played live. The most pit-inducing song has amazing pacing and is another great example of the band’s chemistry.

This song is textbook Turnstile. Hard drums, sleazy guitar riffs, and larger-than-life vocals. This is the title track from their 2016 EP.

3. Come Back For More

This is the intro track to the Move Thru Me EP. “Come Back For More” is jam-packed with Ebert’s signature guitar rhythms and Yates’ charismatic vocals.

Track two off of their major-label debut Time & Space has some of Yates’ most poignant songwriting. This track shows just how much raw-energy Turnstile can produce within less than 2 minutes.

One of Turnstile’s best songs, “Right To Be” acts as a peephole into what would be Glow On by mixing their Hard Rock roots with more classically-structured melodies. 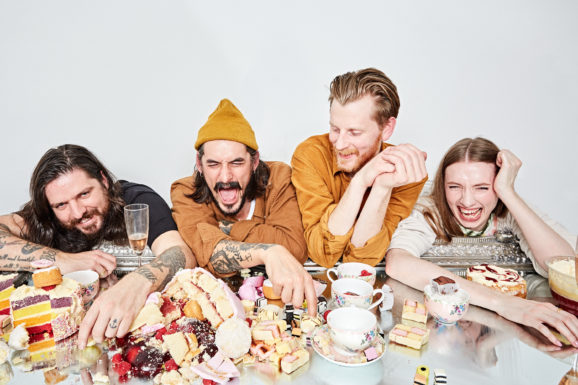