The third Soccer Mommy album, Sometimes, Forever, is a step away from the sound of the first two albums while retaining some elements of the previous efforts. This time singer-songwriter Sophie Allison teams up with producer Daniel Lopatin, best known for his experimental electronic music. The result is an album with more of a pop flair, from the synthesizers to the mixing. Sonically, it’s a much bigger album, especially compared to the low-fi debut, Clean. The bass and drums fill the room rather than being an afterthought.

But it’s still very much a Sophie Allison sound. The same chorus-drenched guitars, light strumming, clever lyricism, and girl-next-door voice that combines pain and malaise are present throughout the album. It’s just those elements with a fuller sound, a slicker production, and a much murkier backdrop.

That’s apparent as soon as the drums and bass kick in for the chorus of the opening track, “Bones,” adding a propulsive element to the gentle slightly overdriven guitars. In addition to the electric guitars from Allison and Julian Powell, the song features acoustic twelve-string from Rodrigo Avendano, bass, drums, and synths. That thickly layered sound exemplifies most of the album.

“I feel the bones of how we used to be,” Allison sings to open the song. Like many Soccer Mommy songs, it deals with contradictory emotions. In this case, it’s the longing for the best parts of a relationship (“You make me feel like I am whole again”) and the knowledge that it’s not working (“I’ve bled you out and patched you up again far too much to call it love”).

The industrial and electronic influences in “Unholy Affliction” give it a dark, gothic sound. In it, Allison wrestles with trying to build a successful career in music while staying true to her art, but also wanting that art to be flawless. “I don’t want the money; that fake kind of happy,” she sings in a disaffected voice over eerie pulsing synths that crackle and moan under the weight of her struggle. “But I want perfection.”

And it gets darker than that. “Darkness Forever” is an exploration of suicidal thoughts (“I want to feel the warm of release”) that references Sylvia Plath’s suicide (“Head in the oven didn’t sound so crazy”). The bleak subject matter is appropriately paired with otherworldly synths and a brooding bassline similar to Portishead’s “Glory Box.” It’s the most depressing song Allison has recorded, but it’s also one of the best. The pain is evident in each syllable of her croon, every distorted drum beat, and every step of Avendano’s bass.

But the album isn’t just a sob fest and Allison hasn’t gone full goth. There’s some lighter, more upbeat fare as well. “Shotgun,” for example, is a catchy love song built around soft-loud dynamics and a powerful chorus. “Just let me stay here in your arms,” she sings.

Previous Soccer Mommy albums were defined in part by the sparse arrangements that allowed room for contemplation between the notes. With the help of Lopatin’s production and mixing, Sometimes, Forever takes a different approach, creating dense sonic landscapes packed with various analog and electronic sounds. It’s Allison’s biggest risk to date but one that comes with plenty of rewards. 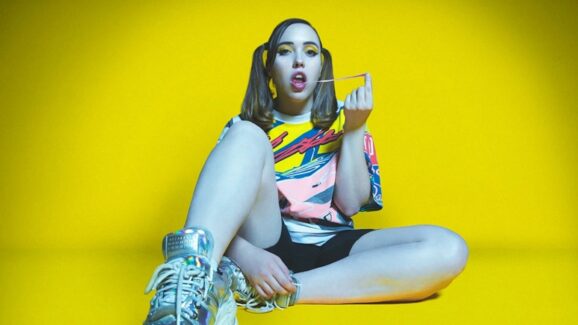