Vorcza: An Interview With Ray Paczkowski 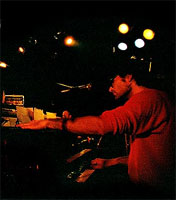 Playing within the small bars and clubs of New England is a three-piece band called Vorcza; perhaps one of the most powerful bands one can still see and hear within a small capacity room. Composed of ex Viperhouse bandmates Ray Paczkowski on various keyboards, Robinson Morse on acoustic bass, and seasoned jazz drummer Gabe Jarrett; Vorcza is rapidly becoming the most important improvisational jazz band in its live music friendly hometown of Burlington, Vermont. Solidified in a traditional jazz foundation, the three members capture the music of the precise moment through rhythmic and harmonic explorations that involves funk, mellow jazz and progressive instrumental improvisations. On the heels of their debut record release Maximalist, Vorcza is thriving on pushing their adventurous sound to unheard territories, both musically and geographically.

The multi-dimensional keyboard talents of Paczkowski hardly go unnoticed, whose fearsome ability to create fresh and invigorating sounds at the thump of a bass or beat of a drum, leads Vorcza into transferring almost every live moment into the birth of a spontaneous new song. Although nationally regarded for his keyboard work in the Trey Anastasio Band, Vorcza is Paczkowski’s creation, an entity he speaks about with pride and delight. Although he would rather let his fingers do the talking, Paczkowski provides some insight into Vorcza and his unparalleled work on the keyboards.

How would you describe Vorcza without using the organ-based trio tag?

Well, we’re an organ-based trio (laughs). No, it’s predominately original music, and we do some covers of some more obscure jazz type genre music. It’s kind of like bop for you mind, shake your booty, but it’s got this other thing.

It’s got that far out, Sun Ra vibe to it as well…

Yeah, its definitely got that thing in it, and we’ll take it out pretty far sometimes.

Do you think the band, in a jazz sense, is a little too far out sometimes?

I don’t think it’s too far out, but we’re definitely grounded in a rhythmic, conceptual thing. My thing is, I have a very rhythmic style, that’s how I think about music. Gabe (Jarrett), his ideas are very rhythmic and always capture me by surprise, when we get moving…someone described it to me as putting the time in all the unexpected places, which to me is a great complement because that’s kind of how I think of it. It’s like you get it, it’s something intrinsic, or innate, in the music that is easily communicated, just like, you understand what I’m saying. But there’s this other thing that’s like – ‘wow, I don’t get it, but I totally get it.’

Your playing is very spontaneous, and everything you throw out there just seems to come out of nowhere. So you’ve really got to be on top of your game at all times in a jazz trio, ‘cause if one of you guys is slacking, it will definitely show.

That’s true. Well you sort of described what the band is, too a large extent. It’s an improvisational ensemble, we have these pieces of music and there’s no telling where it can go or what can come out of it. You can end up doing a disco beat for ten minutes, over an obscure Sun Ra tune…it can just go in any direction.

When you play, it appears as if you are almost singing to yourself and your fingers are moving to something no one else is really in on. What’s going through your mind at those moments?

When that’s going on, there’s nothing going through my mind. I guess I do sing sometimes, but I really don’t realize it. It’s like I’m just shooting for that moment when the connection between my mind and my fingers is like…it’s a “round” type of thing…it comes back and goes out there, and there’s no cognitive…you know, there’s some sort of, on another level of thinking about – ‘ok, well we’re trying to shape the overall thing…that one thing I’m doing is going to lead to the next thing.’ When it translates to the whole band, then we’re like really playing music and it’s like, seat of your pants arranging.

So when you are playing, do you ever think, ‘wow this is cool for us, but I don’t think the audience is digging it?

It’s an ongoing… actually, it’s almost a debate in some ways, talking about what it is that we are trying to do. It seems to always come back to, we are making this music, and we’re never really able to say exactly what it is, but there’s this intrinsic thing that we all know what is happening…but what you are going to call that, or what it is…I don’t know. But it seems to be a happy mix of stuff that, at it’s bottom is totally accessible and you can get it, but it has these other levels of musicality.

Do you find that you have defined a new musical relationship with Rob (Morse) now being in a three piece with him rather than the nine piece you were in with Viperhouse?

In a trio, there’s a lot more freedom of improvisation because it’s just three people, and it’s that much easier to get in the same head about things.

Listening to Vorcza, there are certain sections of the music that would be perfect for vocals…

Oh yeah, we think about that a lot. I’d love to have vocals in this band, and how and when it’s going to happen I don’t know, but I look forward to it at some point.

Have you tried pushing Vorcza outside Vermont and Northern New England?

Yeah, we do little trips like in the Philly area or sometimes Maine. It’s a very regional thing right now, but we’re looking to get it out there.

Do the comparisons to Medeski, Martin & Wood bother you?

No, I’m basically tickled, you know, because I love those guys and think their music is great. I think it’s a very different kind of music. To look at it, it is the same instrumentation on it. Both band are dealing with ideas about freedom in the music, so in that sense, yeah there very much similarities, but I think it’s very different.

In what kind of way?

I think it has even more of an improvisational bend in the sense of rhythmic ideas. It’s hard to describe, I don’t know, I’ve always had trouble trying to pin down this music.

While in Viperhouse, were you listening to Medeski Martin & Wood doing this type of jazz and think, ‘man I should get something like this together?

I actually got an organ around the time, a little bit before, when one of their first albums came out. It was great, it was like – ‘wow, you can do that with a Hammond Organ?’ So, the reason why I started playing the Hammond was I didn’t like the digital keyboards and stuff. The idea of having, I guess, the word would be an “authentic” instrument. It’s got these quirks….and you can get so much sound out of these things.

And you just recently added a Clavinet the past couple years. What does that add, other than the obvious heavy funk sound?

I started playing a Clav because of hearing Stevie Wonder (laughs). All you have to do is hear “Superstition.”

Are there certain emotions that you are feeling that make you move from the Hammond, to the Clavinet, and to your Rhodes?

Yeah, well the sound and the actual nature of playing the instrument lends itself to playing a certain way. To go from a piano to a Hammond, it’s like two different universes. Just like how you attack the keys is totally different. I’ve written music on the piano and it’s taken me a long time to realize this doesn’t translate to the Hammond organ, for whatever reason it is. But there are things you can do with an organ that you can’t do with a piano and vice versa.

Jazz Fest in Burlington is coming up, and you’re playing a show prior to Mike Clark…

Yeah, unfortunately, and this happened last year too, because I’m traveling with the Trey band, and the past couple years, we’ve been gone for the Jazz Fest. This year Trey’s going to play the last two nights in Burlington, so we kind of scrambled around to put together a couple of shows. So, we’re going to play Saturday in City Hall Park and Friday night we’re going to be opening up for Mike Clark.

Yeah, it’ll be great, I’m looking forward to it.

Is there anything that playing with a large band like that, with all these diverse and talented musicians, that you bring back to Vorcza in terms of songwriting and musical ideas?

Well, Trey is a great songwriter, but his vernacular that he is using is different than what I think of, in the music that occurs to me to play or to write. It’s a different sensibility, but I love playing rock and roll, you know it’s great, it’s a totally visceral thing.

Is it quite a change going from a lead instrument in Vorcza to a more subtle and rhythmic part in that band?

I actually like it, because that is kind of my forte, I guess you would say, rhythm. I work with Cyro (Baptista) and Russ Lawton, and it’s great, along with Trey, who also has a great sense of time and rhythm.