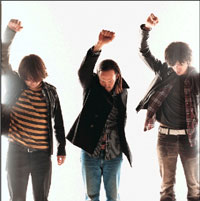 I’d love for it to be one of those word-of mouth records that everybody ends up getting. I don’t know…things really don’t happen like that anymore,” stipulates Scott Bondy about Verbena’s La Musica Negra.

The singer/guitarist is calling from cow sweltering Texas in mid June at the conclusion of a lengthy tour. Although exhausted, he remains optimistic that this recording may become the next “Loveless,” “Fear of Music,” or “Ziggy Stardust.”

Verbena’s most ambitious effort has been four years in the making. Along with drummer Les Luby and bassist Nick Daviston, the band has settled firmly in their southern roots, however still manage to inflict a dark sound that’s mysteriously cool. From the first single “Way Out West,” which summons the left coast as a mythical place, the band aggressively matches the delta blues with boogie metal riffs amongst shades of punk rock. Verbena’s lyrics trample within topics of Jesus, devils, sex, saints and sinners, with no underlying meaning behind the black lyrics that ruminate with: ” Killing Floor (Get Down On It),” “Pistol,” ” Me and Yr Sister,” and the “Devil in Miss Jones.”

“I don’t know really know why, maybe it was whatever book I was reading at the time. But when you get to title things, I think a title should be somewhat interesting and attach to something that has meaning, it just helps for the cause I think,” describes Bondy.

Bondy has not the furthest idea what tomorrow will bring, as the radio has never been the band’s closest ally. He sighs, ” I don’t think you can guess what kind of bullshit those people are going to play. That’s a giant corporation controlling it at this point.”

Although the band’s first single “Way Out West” has spawned considerable radio play and a sharp music video, Verbena, named for a potted perennial, is about to blossom like a beanstalk or stagger like a shrub. Is Bondy scared of garnering a huge following and falling under the pressure of record companies and the music bizz? “No, it doesn’t seem to be happening that way. I have really no idea what’s going to happen,” he answers.

Stemming from Birminham Alabama, a place that is more in tune with the southern helpings of Lynyrd Skynyrd and anything Nashville, Verbena doesn’t exactly catwalk the south on their sleeve. Birmingham is a city where the weather is hazy, hot and humid, and the music scene is a bar stool behind to “what is hip”. In fact, Verbena blends in with their Heineken west-coast cravings as accordingly with their Budweiser roots. Back in Alabama, they were never part of any particular music scene, and just kind of existed in no mans land, somewhere between Tennessee and Mississippi. Although it used to bother Bondy, he’s gotten over it. One particular new tune “Rememberer” sounds like a Nirvana creation, but Bondy finds it more in line with Skynyrd’s “Simple Man,” maybe an oblique way of falling back to his rebel roots.

Verbena’s first release in 1997 was with indie Merge Records, until the band caught their big break and signed with Capitol records, where the muti-talented Dave Grohl produced their 1999 release Into The Pink. The band didn’t make a big hoopla of working with the Foo Fighter and strove to achieve stature by recording the same ol’ way they do every time: Drums first, guitars and bass next and vocals last. Like a rustic Dylan quote, Bondy makes no distinction between any of his three recordings: “When I’m done recording, I don’t listen to it any more and that’s it.”

Even playing the same stage as one of their prime influences Sonic Youth, hasn’t ruffled Verbena’s leaves. “For every one decent musician that’s been on a stage, at least ten shitty bands have played on that stage, ” Bondy snares. On the fumes of that combustible response, one can only wonder how many times Verbena has played in the dust of Limp Bizkit or Creed.

After spending some serious “QT” making La Music Negra, Bondy would love to march into the studio soon with nothing planned, just as means of making a pure statement from scratch. Wherever those chords may fall, the word of mouth classic that is uniquely Verbena may rise for all to hear.