The Freeriding Craze And Controversy: What Is All The Fuss? 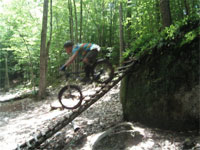 Many of us involved with biking have been hearing the phrase freeride being used by friends and folks in the biking industry. Even bike manufacturers have developed a “freeride style bike.” So maybe it’s time to ask: What is freeriding? And the answer is NOT THAT EASY!

Since its inception in the mid 90’s, freeriding could be viewed as a very close relative (offspring) of mountain biking. There are probably as many definitions of freeriding as there are bikers that consider themselves freeriders, so we certainly wouldn’t want to set too many limits. However, in an attempt to corral what appears to be a wild horse we’ll try to offer some insights.

The idea of riding free seems to imply breaking through existing parameters or restrictions. Possibly riding and going to new places or heights where few have gone before (like Lance Armstrong possibly winning #6 Tour de France). Here’s another example: At last year’s Tour de France, in a particularly mountainous region of the course, while a group of the tour riders were ascending a steep pass, low and behold above them, in the air, was a biker (freerider) jumping off the cliff, over the riders and landing, or crashing landing, on the other side of the road. This freeriding stunt was captured in a fantastic photo which appeared in several notable biking mags. Someone was clearly trying to make a statement. Since when have bikes grown wings? The thought of being air born on a bike maybe 10 or 20′ up is one scary thought. However, the thought of being air born 2,3,4, or maybe 5 feet is a whole lot less intimidating to me, but even this may bring shivers to some.

Almost every athlete, every hard core participant, is looking to set a new standard, re-define their own personal limits and boundaries within their preferred sport. In the case of mountain biking, new riders are often excited and thrilled when quick progress is made. But then as with any sport, as you become more competent, proficient, and comfortable with your skills, there’s a tendency to want to seek the adrenaline rush and a challenge again taking your own personal limits to new uncharted areas.

In 1996 we were already five years into building trails at Back Country Excursions – LLC New England’s first successful cross-country mountain biking touring center – when that winter of 1996-1997, an ice storm paralyzed the area bringing down enough trees to block up the trails for years. Around that same time I recall reading an article about some riders in British Columbia that were building bridges over trees in order to keep the ride going non-stop. At first I thought: How was it possible to ride on a narrow bridge suspended several feet above the trail?

Then came spring and the seemingly endless job of trail cleanup. I could see that there was still usable trail, but numerous sections on every trail had major tree blockage. I began to notice that in several places where trees were down there seemed to be a slight downhill slope, so I thought: What if you had enough momentum that you need not have to pedal, just balance and coast. why couldn’t it be possible to just coast over a bridge, even a narrow one?

The thought of being on a narrow bridge in the air was scary, but I decided to give it a try anyway. I guess that I was ready, so I carefully built the entry and exit, on and off the bridge/ramp very smooth and it worked! Not only that, but riding it soon became very predictable and fun, no longer scary, just fun. So from section to section we began clearing more trail of debris. But in other sections we constructed ramps, bridges, and numerous interesting ride-able apparatus/stunts these helped to keep the riding going and trail open.

Clearly the image of a bike and rider 10 or 20′ in the air certainly is pushing the limit way beyond what’s reasonable for many of us. Maybe riding on narrow bridges and seesaws, or dropping off a 3′ high rock onto a trail may also be out of bounds. The interesting thing is: We all seem to be on a variable continuum of what is fun, acceptable, and considered safe recreation. And as long as our recreation doesn’t directly or indirectly hurt others, brake laws, or destroy property then isn’t it anything goes? I’m sure that when the two-wheel bike first came on the scene folks were very skeptical, fearful, and probably some places tried to outlaw them.

Industry Support For Freeriding -The Combining of Technology & Riding Styles

The origin of freeriding as a style can be traced to the blending of cross-country mountain bike racing – trial riding-slow speed maneuvers coupled with impressive balancing and dynamic moves – and downhill mountain bike racing-the kind experienced at the ski areas. The technology of hardier built bikes, long travel, dual full suspension, and high performance disc brakes, combined with the needs of the cross-country biker for a stronger, but lighter bike than its downhill cousin, with completely adjustable suspension, has produced what the industry calls a “freeride bike.” As a freerider, you now can literally have your own PB (personal bike), kind of like a PC. You can pick and choose your frame, components and create the kind of ride experience you want, or you can see what manufacturers are offering up and find one to fit your style. One point to now keep in mind is that this once high-end flashy technology is trickling down, making its way into the mainstream, and offering the average rider a new sense of confidence and ability to tackle more challenges than ever before. Some of the industries top supporters have been: KendaTire, Finishline, Clif Bar, Sixsixone, Shock-tek, Mt Borah, Fujibikes, Crank Brothers, Brave Soldier, BuffUsa, Rock-shock, Marzocchi, Hays, Avid ,Magura Jittery Joes, Teamdirtygirls, and Xtracycle just to name a few.

Trails that incorporate obstacles, ramps, bridges, etc. require careful thought and safe construction, design, and signage so that a wide variety of riders can still use them. Obstacles when built properly will offer you PERCEPTUAL risk, but the ACTUAL risk is very low. As a touring facility we do a lot of guiding, instruction, and skills development and have an obligation to our clients to offer these kinds of trails in a very responsible and sensitive manner. We quickly recognized that self-confidence and emotional stability in the face of an obstacle varied greatly from one rider to the next and a rider might have the confidence for one obstacle but not another. Still other riders would not be interested at all. By providing options and a clearly visible alternate route on the ground around obstacles it would be possible for these trails to be accessed by many riders. And then there are the riders that have a desire to ride obstacles but not always have the emotional confidence NEEDED. These are the folks that we need to be sensitive with. Through guiding and offering visual demonstration and verbal directions it is possible to assist them with sometimes a high degree of success. But if we observe too much hesitancy on their part we’d suggest trying it again later when they were less tentative. Managing and guiding riders on trails of this nature is very important, especially for first timers on the trail.

Because of the excitement, and the sometimes intoxicating effect of successfully negotiating a hand built challenging obstacle, some freeriders have had a tendency to plop down and build obstacles on public trails that are not patrolled, clearly marked, or managed. Over time, this has caused the closure of a number of trails in some communities. The IMBA (International MT Bike Association) has recently come out in support of freeriding. However IMBA is a responsible, respected organization and prefers not to support the unauthorized use of trails for obstacle construction. Because of a few irresponsible freeriders the reputation of the off-road biking community has been tarnished. In an attempt to fix any damage done and to support its affiliate clubs and members, IMBA has been working closely with park and trail managers to have designated freeride areas or zones and is in the process of offering reliable and safe information on obstacle and trail design and construction. This method at present seems to offer the best solution to this access and user issue.

Retrospect: Into The Future With Freeriding

Here’s a frightening thought: Try to imagine way back, when you learned to ride your first two-wheel bike and finally getting it, the concept of balance and momentum. Until that point, we all had the fear of falling and getting hurt. We all have our limitations and attempt to have respect for them, but at the same time we try to go on facing our challenges. Maybe a bit fearful at times, but when we feel ready, when our confidence and emotional forces are right, we leap off taking small steps one pedal stroke after another. 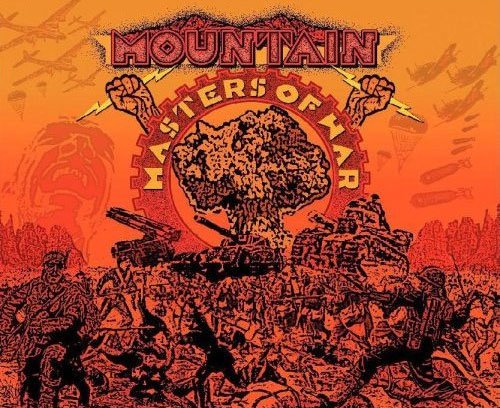