Xavier Rudd: Solace Down Under (INTERVIEW) 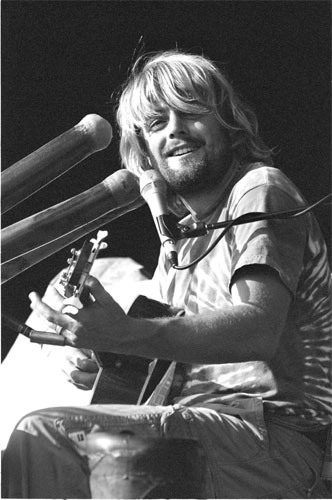 Xavier Rudd has been known to dabble around with a few instruments. Well, maybe a few is a bit of an understatement. He actually keeps himself so encircled on stage by slide and acoustic guitars, didgeridoos, harmonicas, drums, stompboxes and anything else he can pound, play or pluck, that he looks like a coin-dropping carnival act. But after listening to this bleach blonde-haired multi-instrumentalist, it’s impossible not to take Xavier Rudd quite seriously.

“I always kind of fiddled on stuff, and taught myself everything I do,” says Xavier Rudd on the phone from his native Australia. “My first instrument was my voice and I fiddled on a bunch of things.”

For Rudd, 26, “fiddling” has transgressed into proficiency. With his relentless use of guitar and the stomp-box that he pounds vigorously with his own bare feet, there is plenty of multi-tasking abound.

“My left leg goes to my right hand- my body rhythmically goes to the opposite side, which means I can rest my guitar on my right leg and I can change pedals with my right leg, but I can keep rhythm longer with my left,” he explains. “I can sort of separate my body rhythmically, so it just flows for me. I don’t find it hard at all, or found it something I had to practice a lot.”

Guitar and stompbox aside, it’s Rudd’s didgeridoo talents that make his music equally magnetic. The instrument that has its birth in early Australian Aboriginal culture is a long wooden flute, perhaps the oldest musical instrument on earth. Constructed as a means to mimic the essence of the outdoors, the didgeridoo is part meditative platter and part euphoric celebration. Playing the instrument utilizes a special technique called ‘circular breathing,’ in which air is breathed in through the nose at the same time as air is being blown out of the mouth. Rudd has specifically trained his diaphragm and lower lung capacity to expand to an enormous length, allowing significant amounts of air to enter.

Along with his calls of the wild, Rudd writes all his own music and almost always takes the stage solo. His percussive arsenal surrounding him, he keeps the rhythms afloat with his emotionally tinged voice, which in reflection of his love for the Pacific Ocean, is equally corrosive and calm.

Watching Rudd perform, there is a radiance that has proven to immediately win fans over. Incidentally, his solo set at the 2004 Bonnaroo Festival was one of the weekend’s most buzzed about sets, as his independently released album Solace, was the events’ best seller.

“I was hot and looking forward to playing because the sound check was cool and people were checking out my sound check and digging it, so I felt good,” Rudd recalls. “And I had ten minutes after that, before I played so I was already pumped.”

He may perform alone, but ironically, Rudd seems rather uncomfortable talking about himself. When the more holistic subjects of nature and balance are brought up, his voice changes from reserved to candid. Like the didgeridoo, Rudd incorporates what he understands best in his songwriting: love, life, nature and everything that surrounds him. On “Shelter,” the first tune on Solace, he sings “Here I am, this is my shelter/Here I’m at one with the trees/All these birds sing to my rhythms/And these waves they comfort me.”

An avid surfer most of his life, Rudd mentions he’s so “baffled” by nature that when he travels from city to city on tour, he’ll find a forest or a secluded place to get away. In fact, in his past winter tour, he made sure a “mountain day” was reserved so he could snowboard in the Rockies. The Pacific Ocean seems to travel with Rudd wherever he travels. A citizen of both Australia and Canada, Rudd splits his time on both sides of the big sea between the Southern Victoria Coast of Australia and the West coast of Canada. With his soft, laid back voice and general appreciation for the calmer aspects of life, you won’t see Rudd renting a duplex in Manhattan anytime soon.

First released independently in June 2004, Solace has been moved to Universal for national release. Recorded as an intimate live performance, Solace captures Rudd’s raw energy and earthy joy of his sense of belonging. The album is currently closing in on platinum status in Australia and has already earned him two Australian Music Award nominations. It’s a big record label jump for Rudd, whose talents were primarily recognized by his peers and contemporaries: Ani Difranco, Michael Franti, String Cheese Incident, moe., G-Love and Jack Johnson.

Although success might make travel and touring easier, don’t expect Rudd to drop the values and politically conscious efforts that endeared him to his fans and artist friends everywhere. Within his worldly excursions, Rudd holds a warm spot for America, who he describes as – “American people in general are very warm and welcome and cool people. I love America, it’s a great place.”

When not touring, Rudd spends his free time songwriting, surfing and talking to his didgeridoo sponsor, while also preparing for a U.S. tour. Even when things seem to get hectic, he knows quickly where to find solace. Playing a stage full of instruments simultaneously is just the easy part.