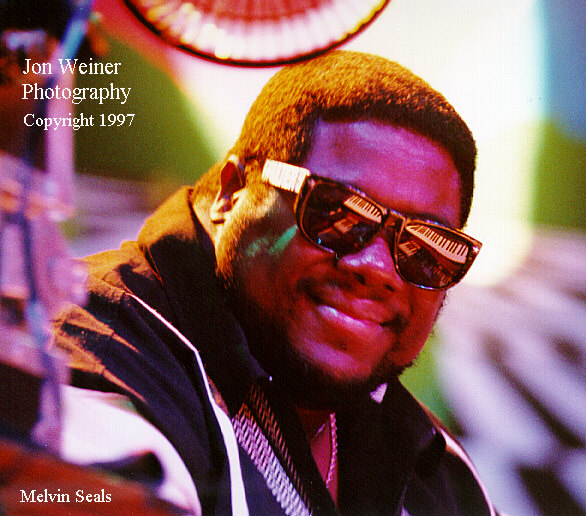 The smile—that’s the first thing you notice while watching Melvin Seals perform. I can still remember him building a swirling crescendo with his Hammond M-3 one cool November night in Rochester’s Community War Memorial. All during his solo on “The Night They Drove Old Dixie Down,” he held his trademark Cheshire cat grin (under his equally identifiable sunglasses) while he practically blew the roof off the building. However, I’m not the only one who found Melvin’s energy contagious. During his time as the keyboard player and musical arranger for The Jerry Garcia Band, he evoked from Jerry a sound so simultaneously loose and intense that it rivaled (and sometimes surpassed) his work in the Grateful Dead. In fact, many of my fellow Heads during the late eighties and early nineties preferred seeing Jerry with his own band. Talking with Melvin after the release of his first official solo album, Melting Pot, he attempted to explain the invigorating effect of the JGB on Señor Garcia:

“Jerry was burned out on the Grateful Dead. The Garcia Band was not formed like the Grateful Dead where we had to vote and agree on everything. Whatever he wanted, that’s what we did. He could play the style of music he wanted. The old Motown, gospel…Jerry loved that stuff and he got more of a chance to play that with us. The Grateful Dead had another direction, which of course made them famous, but they’d done it for quite some time. It was a breath of fresh air for Jerry to play in an entirely different style with his band.”

Unfortunately, as has been suggested in many of the books written about the Dead in the last few years, the rest of the band did not share Jerry’s appreciation for his outside endeavors. “They [the Grateful Dead camp] did everything in their power to keep us from working…they even offered Jerry more money to drop the band entirely. We sold out the same venues that they were selling out and were getting some great reviews. They knew the fans were responding and they didn’t want to see that.”

But even pettiness and jealousy couldn’t sour Melvin Seals. This is probably a result of his musical roots being firmly planted within the walls of the church. “I grew up in the church. My father was a pianist and the choir director. Growing up, we had a piano in the house. When I would come home from school, I would bang on the piano and try to make some noise with nobody around. Eventually, I started make some sense out of it. I think I started playing in the church at the age of seven or eight, playing whenever they would let me play, and I wasn’t very good. But I was working on it.”

Seals went on to hone his chops working on Broadway productions in his native San Francisco. “I did that for probably about, wow, about ten years. Then I sat in with a lot of celebrities like Buddy Miles, Billy Preston and Chuck Berry. I played with the Charlie Daniels Band and the Marshall Tucker Band. When we were on bills together, I would come out and jam with them, but I was never in the band or went on the road with them. Then I got with Elvin Bishop for about 6 years and had the hit ‘Fooled Around And Fell In Love’ and that was the height of that. But that was how I met Maria Maladur. I did some work with Maria and at that time John Kahn (bassist for the Garcia Band) was her boyfriend. That’s where John heard me and offered me the opportunity to come over and play with the other band.”

Melvin played with the Jerry Garcia Band from 1980 until Jerry’s death in 1995. In addition to recording his own album, Melvin is a member of “The Mix,” a group featuring Dark Star Orchestra’s guitarist, John Kadlecik. Their album, American Spring, is far more than another Garcia tribute album. Even though the disc contains a fantastic version of John Lennon’s “Nobody Told Me,” it’s full of standout originals. “The whole idea of ‘The Mix’ was to get together writers. John Kadlecik—he shares the same thing I share. As a writer, he’s not able to perform his songs in ‘Dark Star’…I commend him. A lot of guys have a note or two or some signatures, but John has done his homework. He spent some time listening to Jerry and learning some finer things that other people don’t get. And yes, when I hear John play I hear Jerry all over again. It doesn’t bother me because I like that sound. I liked playing with Jerry. It’s not the same thing–I recognize that. But it’s mighty nice.”

After Jerry’s death, Melvin, along with the Garcia Band’s trademark backup singers, Jackie LaBranch and Gloria Jones, toured as “JGB” in a tribute to their late guitarist. They released a live disc, Welcome To Our World, but he soon recognized the difficulty in keeping the style of the band alive without adhering solely to its repertoire. “It seemed that like when Jerry died, time stopped for a lot of folks. They didn’t know what they were going to do. There’s a lot of great material out there that Jerry would have done. But because he didn’t do it, it doesn’t mean anything [to Deadheads] no matter how well it’s performed. So that’s why I decided to work on some other things.”

Since then, Melvin has noticed that folks are not only returning to “the scene,” but are bringing a fresh, open-minded perspective. He will be appearing with JGB on this summer’s festival circuit. He knows he will never turn his back on the style that has endeared him to Deadheads: “I’m always going to be playing that style of music for somebody, somewhere,” but the “Melting Pot” album isn’t all Melvin has in his sights.

“Those were songs I wrote for other artists, Bonnie Raitt, Elvin Bishop, but either I never got it to them or they never got a chance to perform them. But I’m going to be writing for myself now. I started that album about eight to nine years ago. I was a little afraid because this is my first solo record. Fans know me as playing a jamband-style and I’m sure they would have liked me to play more “cookin’” songs where I’m wailing over the organ. There’s a mixture of different themes on there. It just so happens that we have it out now and in my own name.” He plans to combine his studio work into a touring project known simply as The Melvin Seals Band.

It’s been 14 years since I first saw Melvin Seals perform. Even while I remain a hardcore Deadhead, I listen to a much wider variety of music than I did back then. I find myself consulting the “source material” of original artists that influenced my favorite band as they themselves evolved. Melvin senses a similar shift among his audience. Now is his time to try something new. “Maybe now it’s also a product of enough time passing that people are willing to accept artists going out there and creating their own sounds. Obviously, there’s a huge void where Jerry and the Dead used to be, but I know that me, personally, I’m more open-minded to something that while it’s in the spirit, it’s not just that.”