SB: That seems to be a problem with John Henry’s ownership of the Red Sox: The organization seems to take the ticket-holders for every penny they have.

SB: Can you tell me the story of the song Champions of Glorious Defeat?

RM: After the ’03 season, which was such a heartbreaker, I wrote a song called Champions of Glorious Defeat. It was almost like a hymn when I wrote it because it was really sad. So I [worked out the song] with my friend Peter, who is a rapper, and he’s a big Red Sox fan too. We actually played it out and it helped ease the pain a little bit.

The next year when they won the whole thing we revamped it and called it “Champions.” It was the same song but we totally flipped it around because we were now Champions.

SB: What was it like the first time you played it as Champions?

RM: Oh man, it was great, everything was just a party. Just saying the words Red Sox got the crowd into a frenzy, unless it was a New York crowd — they’re still bitter. The Red Sox winning honestly changed my life, that whole part of everything was like getting a huge monkey off our backs, and not having to hear it anymore from my Yankee fan friends.

RM: It’s funny, we comment to ourselves about that sometimes. It feels like we are on a baseball team. It really does feel like that because you come into different towns and you never know what you are gonna get. We even joke around and make up metaphors (about shows) like “We were down a couple of runs and we pulled that one out.”

A kid I went to high school with, Steve Lomasney, was drafted by the Red Sox in 1995. I remember talking to him at a reunion and we both agreed about what a struggle it is to become a major leaguer, either in music or baseball. Most people see this player and don’t get the fact that this guy is working hard all the time to get to the top. [People] think that big leaguers were born major-league players. There are no shortcuts. You pay your dues, and if you are good enough, you survive.

SB: What do you think of the Red Sox chances this year?

RM: I feel pretty good about them, but they are going to look so different this year. Dice-K is a big question mark. The rotation has a lot of guys that can do it, but it remains to be seen if they will. We’ll see. I think they have the tools to do it, at the least they are going to be an interesting team to watch.

I really want them to win the division — I’m sick of coming in second. Just for once I want to beat the Yankees for the AL East.

SB: How have things changed in the Yankee/Red Sox fan dynamic since 2004?

RM: I’m sitting in a studio owned by a big-time Yankees fan. Matty, our bass player, goes at it with him all the time. It’s funny man…you know the ’04 series really did change my life because all of the sudden it was like “Yes, we can finally win one.” I was just so sick of taking guff from all the Yankee fans over the years. Now it’s almost like things have been reversed: We’re almost smug now because we won the world series, and the Yankee fans are really bitter and really pissed off in general, and it used to be totally the other way around. We needed it…it was just too lopsided for too long. To get a championship was huge — the number one is infinitely more than zero.

SB: Let’s talk about your music. Will you be playing any of the songs from the new album live before its release in the fall?

RM: There’s already a few that we’ve been playing out for a little while. I just wrote some brand new stuff, and I’m sure we’ll be playing some of it throughout the summer. We’ll try not to break out the new stuff too much, but we probably will.

SB: Are you excited for the upcoming festival season?

RM: Oh man, I’m pumped. I cannot even believe some of the festivals we’re playing. I’ve been waiting five years to play these festivals, and now that they are actually happening I’m kinda freakin’ out.

SB: You don’t hear about viola players in rock bands, can you talk about Larry Scudder’s contribution to the music?

RM: Larry just brings such a cool energy. He’s a very unique player it makes things flow a little more seamlessly. There aren’t many viola players in bands. He’s a unique character for sure, and he brings a really unique sound to the music. He really has great ears and he reflects what I do vocally and kinda uses that to feed off of, which is really nice. Larry really fills in the gaps for us. We have a full sound with just the four of us, but with Larry there it kinds of pops it into this whole other level and makes everything flow just a little more seamlessly.

Thanks to Ryan for sharing his thoughts with us. We plan to check in with him at the All-Star break and again at the end of the season to discuss how things have turned out for his Sawx. The Ryan Montbleau Band will play at Baltimore’s 8 x 10 Club on Thursday, and will continue to tour throughout the month of April. The Hidden Track Baseball Preview continues later this week… 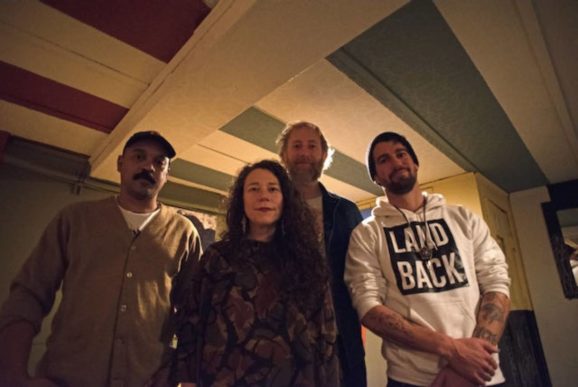