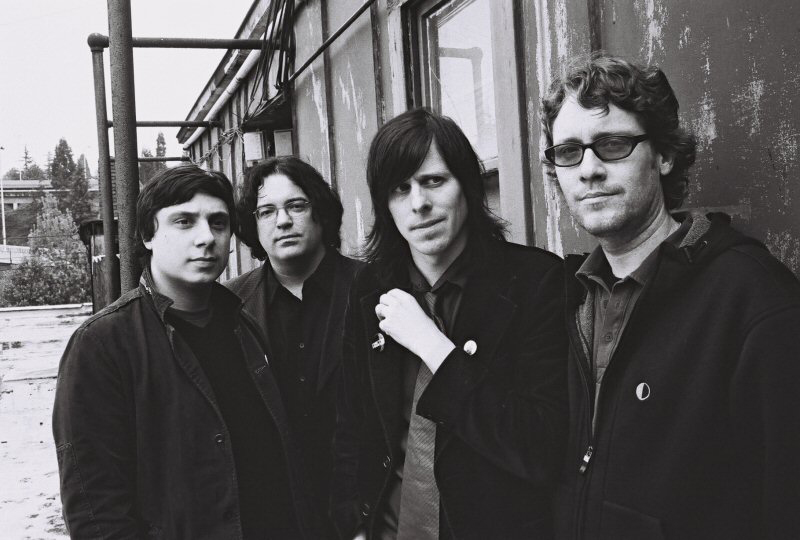 The Posies might not have captured a wide as an audience as was once anticipated, but their unique style has made a prominent mark on popular music. With a politically charged new record, 2005 finds them reunited and sounding better than ever.

Formed in 1986 by guitarist/vocalists/songwriters Jon Auer and Ken Stringfellow, the Posies became one of the most popular power pop bands of the 90’s. Like Mathew Sweet and Teenage Fanclub, the band successfully updated 60’s pop for the alternative age with British invasion styled melodies, thrashing guitars and quirky lyrics.

Former members of the Northwest’s’ premier psychedelic revivalist band, Sky Cries Mary, Jonathan Auer and Ken Stringfellow began playing music together while still in high school, “I believe I was 16 when the concept for the Posies came to be. It wasn’t so much of an idea for a band at first, but more about two young guys who were in love with the idea of writing and recording original songs,” says Auer. In 1988, the duo released their debut, Failure, on which they played all the instruments, “Ken was attending the UW when we made our first record Failure most of which was recorded during weekend breaks from my last year of High School in Bellingham, in my father’s home studio. Ken would drive up from Seattle and we’d work all weekend having dinner with my parents after a full business day in the studio. I mixed the entire record in a 6 hour all-nighter, from 12 midnight to 6 the next morning” he admits. The cassette recording was soon picked up by Seattle indie label Pop Llama which eventually led to a major label deal with Geffen. In 1990 they released their major label debut, Dear 23.

With their newfound notoriety, the Posies were asked to open for the legendary power pop band Big Star, “Somebody asked a simple question: would Big Star like to play a show? Simple as that. After a short selection process, Ken and I got the job and obviously were thrilled to be a part of it. 12 years later, we have a new Big Star record, IN SPACE. We’ve gone from hired guns to collaborators. Playing with Alex Chilton and Jody Stephens can be as good as it gets,” said Jon.

Despite a push from the label, the age of smells like team spirit had arrived and the Posies ‘janglely’ tunes took a backseat to the angst ridden music of the day. The band answered with a surprisingly hard edged recording, Frosting on the Beater. The Posies 1996 follow-up, Amazing Disgrace, possessed an even more hardcore quality which was hailed by critics, “Amazing Disgrace IS very angry! I had to listen to it recently when the 2005 line up of the Posies were learning songs for our current tour and it actually kinda shocked me how pissed off it sounded. Not a bad thing, just so of it’s time and headspace, not the most harmonious time for the Posies,” says Jon.

In spite of three critically acclaimed records for Geffen, the Posies never managed to break it big in the U.S. and were subsequently dropped by the label, “Some people sell millions of records, some don’t. Who knows? From my experience, it certainly isn’t a reflection of the quality of the music. For example, as if you needed it, Britney Spears has sold a gajillion copies of her incredibly bland CD’s yet the Flaming Lips never sell more than a few hundred thousand. Luckily, I’ve sold a pretty good amount and managed to have a career doing what I love the most. If that isn’t the definition of success, I don’t know what is. Geffen liked it just fine and although it didn’t do the business of Frosting On The Beater in the states, it sold better in Europe. Go figure,” said Jon.

While the Posies seemingly change rhythm sections as often as underwear, it is Jon and Ken who remain the creative force in the band. Regardless of their 1998 break-up, collaborations with other bands and solo projects, the two seem to be musically joined at the hip, “I’m past the point of analyzing why our relationship works. Long story short, it simply does and it still does after many peaks and valleys in our long relationship. Right now is definitely a peak,” says Auer.

To the delight of fans, the Posies got back together earlier this year and are currently on tour in support of their new release, Every Kind of Light, “Ken and I started working on a box set and a greatest hits for the Posies somewhere around 2000. This kind of started a dialogue and reopened the locked door of our friendship which had been in major disrepair since 1998. What we discovered is that we still had fun and we enjoyed playing together. An acoustic show happened at the Showbox in Seattle around this time and on thing led to another, a three-month tour of the world as a duo, which led to put the rock version of the Posies back together and here we are in 2005. It’s all been very organic, really.”

The latest Posies CD contains some highly political tracks as Jon and Ken take a swipe at George Bush and the conflict in Iraq, “How could you not live in America and NOT be a little pissed of at the current government. We are getting a raw deal and the rest of the world has to suffer as well. That being said, only 4 songs out of 12 on Every Kind of Light have what could be construed as a political bent and even then most people wouldn’t know they were political at all unless it was pointed out to them. Honestly, I think the political aspect of our record has been overemphasized. It’s a record about relationships – with people, where you live, what you believe, who you love, why you love – these are all things one has a relationship with,” said Auer.

While the Posies are back together, both Auer and Stringfellow enjoy solo careers, “I have my long-suffering solo CD Songs From The Year OF Our Demise coming out in March 2006, after the Posies are done touring in Feb 2006. It’s much more direct to my emotions personally and isn’t made by committee like Posies records are these days. I also think it’s more delicate and intimate overall, qualities I believe to be as powerful and extreme as being loud and aggressive when done well to the ninth degree,” said Jon.

Even though they took a six-year break, the second coming of the Posies finds the band in a more mature place. Still consummate songwriters, Jon Auer and Ken Stringfellow are proving to be just as relevant as they were in the 1990’s.