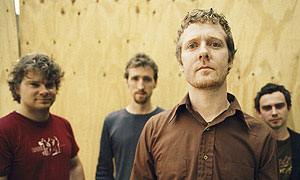 Dublin’s The Frames are probably sick and tired of seeing the word “heartfelt” in the opening line of nearly every article or interview concerning them, but it’s true, this is a band that wears its emotions on its sleeve. In many cases this would be a liability. Listening to some of those very early U2 records is a reminder that naked emotion doesn’t always translate into enduring good music. The Frames, on the other hand, manage to convey a sense of restraint while letting emotions swim to the surface. This kind of subtlety is probably one of the reasons singer/songwriter Glen Hansard says The Frames are totally wrong for the usual sort of “let’s make a gold record” music industry marketing tricks. Hansard says he doesn’t want his music forced on an audience of potential listeners. In spite of crap corporate marketing schemes, he says, good music will survive and find an audience. Glide had a recent sit down with the outspoken Hansard during The Frames’ fall tour to elaborate on the goods and bads of today’s musical climate.

There’s a lot more ‘space’ in music these days. In the 90s you had a lot of wall-to-wall screaming on the radio, but lately there seems to be a shift in consciousness. People are letting their songs breathe more. Have the audiences changed or have the musicians changed?

I think ultimately, music is medicine. I think that the medicine that’s required at a certain age or a certain time is what becomes the important music. In the nineties it really felt, angst was the feeling in the air, there was a kind of a “fuck it!” feeling. At the moment I feel we’re in an age where music has been so commodified…You walk into Urban Outfitters now and you get a “goin’ back to school” mix CD, the whole premise of it is that it’s supposed to be made by some cool DJ bloke that just wants you to hear all these tunes, when in fact it was made by a corporate company that wants to sell twenty of its new bands. And I find it especially obvious in America than anywhere else in the world. In Europe they do it more subtly but in America they’re not afraid to say, “we’re marketing to you!” I remember being young and I remember how I got into AC/DC and how I discovered Bob Dylan and it never had anything to do with TV. I found a Pink Floyd tape in the street when I was a kid…I listened to it for two years and never know who it was. I played it constantly on my walkman and never knew who it was, I loved it so much. I guess what I’m trying to say is that (music) has been commodified to the point where it’s just so obviously handed to you with a vial of cocaine. For that reason, I would like to think that we’re one of those bands people discover and will never be forced down anyone’s throats. I really hope that.

The way people consume music today is so different, with the iPod and MP3s, the internet, how do you think that affects The Frames? There’s a massive tidal wave of music out there, on the internet and everywhere else, and things just slip under the radar.

I still think the old rule applies; that good records never get lost. I really believe that. Nick Drake’s a good example of that. He put out four records during his life; none of them had any success whatsoever sold about three records and never had any success at all. He just had an awful career and yet he made all those beautiful records. Twenty years it took Michael Stipe or somebody like that to say “Nick Drake” and he became a huge star in the nineties. I kind of feel like we’ve gone back to the seventies in a lot of ways. Great songs in the seventies, but a very soppy time, a very syrupy time in rock and roll, and we’ve gone back to that. There’s a huge diversity in popular culture right now and I really do like to think we’re a part of it.

There are so many singer/songwriter releases today, in some ways a lot like guys from the seventies like Leo Sayer, but now there’s an edge that those singers didn’t have.

It seems to be a decade thing where the culture seems to go out on a limb and then goes back to being safe again. We’ve seen a lot of shifts in music. I remember when Radiohead had a hit with “Creep”; we were playing gigs with them in the early nineties going around England with those guys playing to twenty people. I remember when “Creep” was a hit with them and thinking that’s great. (I thought) Maybe that sort of song will widen the breadth of what people are listening to. It’s interesting because it swings to Nirvana and “Teen Spirit” and it knocked people on their head. And then out of “Teen Spirit” the watered-down version of that, which followed directly in a line you hear in Alanis Morrisette’s “Jagged Little Pill” which was the watered-down commercial version of what Nirvana were truly doing. And I think it happened with other big bands, I think Coldplay was a result of Radiohead. Radiohead is a band with dirt in their fingers because they dug. The whole idea of the avant-garde, they were the Roman soldiers in the front who were told, “we want you to run one hundred yards, and in that hundred yards you’re going to get killed, but when you fall that’s our ground.” Radiohead was one of those bands that just said “fuck you all!” ran they ran with the flag and what you have then is, you’ve got Coldplay sort of wandered in safe from the bullets and they get to that point and they don’t really push. I’m not saying Coldplay is a weak band, they are a great band. But Radiohead are really digging for gold, they got their fingers dirty. They have suffered for their art. They’ll hurt themselves and hurt their career to do what they want to achieve. The world will remember them as pioneers.

Ever had to stop and redefine yourselves or keep outside influences from telling you how to operate?For us it was a lot more subtle, we were signed to three major labels and each time they tried to make us in to a certain kinds of band and every time it was “no, no, no!”

How does that happen, what do they tell you? Do they approach you with another band and say, “We want you to live up to this?”

When we got signed to Trevor Horn’s label, he came to our gigs and said I want to make this band’s records, I want to make this band big.” But then when we went to the studio with him he kept saying, “You’re just this great bar band! You’re like a great Hootie and the Blowfish.” We were just like “You are so, so off the mark!” And at the time we were listening to Sparklehorse and The Magnetic Fields and getting excited by this weird American music coming out of the Midwest. And he was just like “Dude, this music is awful.” In the end it was that classic mistake. An Irish band singed to an English label will never ever work. It never works; England and Ireland culturally are just as far apart as…culturally we never understand each other. 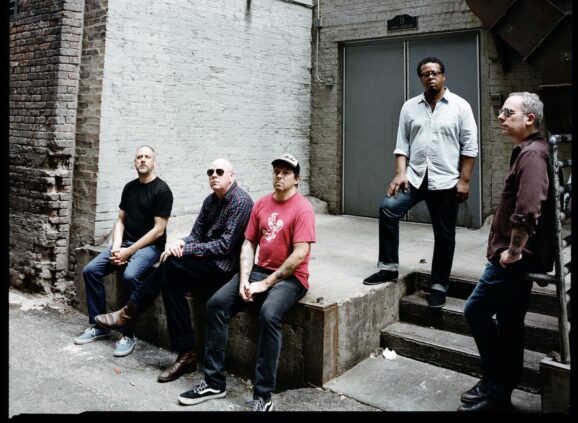