HT: Any venues that you’re particularly excited about?

MG: Some of the venues I’ve probably never seen before, but the Telluride Opera House, that’s a teeny one. Everyone thought we could sell out the bigger one at the top of the hill, but we just decided that the Opera House is cooler, and sometimes the decisions are made for that reason. Not that the big one isn’t cool, but the Opera House has a special thing about it. I saw Nickel Creek there one time.

I’m also excited to go back to Nashville. I haven’t been back there in a while. I’m kind of more in song mode though, rather than venue mode, because we are about to get into some serious practices.

HT: Speaking of, what is the rehearsal regimen for the band?

MG: I wish it could be more, but usually for about a week before we leave, we get together and practice pretty intensively. We have to figure out how much new stuff to play each time, because the problem with overloading is that were not sinking our teeth as deeply into each song, and having enough time to work on the old songs. My fantasy would be to have a month instead of a week even though the tour is less than a month, so that would take too much time out of people’s schedules.

The good thing is that after we do this first week of practice, we typically have the opportunity to do some long sound checks everyday. Sometimes we’ll actually play for two hours, and rarely will we play for much less than an hour. That’s longer than the typical sound check for most bands. So, it becomes not just a sound check, but a rehearsal. We’ll dial in on things we’ve been playing and sometimes learn some new songs. It ends up being very valuable time. It ends up being quite a lot of rehearsal time in the end.

[Photo of a recent rehearsal from Mike’s Facebook Page]

HT: A lot of the Moss material – and in a sense, the songs you write in general – lean towards catchy grooves, but with with a complex element as well. Do you have a philosophy so-to-speak towards catchy music, major keys,  and I-IV-V type structures, if that makes any sense?

MG: Yeah, I kind of struggle with the fact that I like to hear music that has sophistication to it, yet I really appreciate music that is pared down to its raw essence. So, I think it’s a balancing act that I constantly struggle with. My current feeling – and I keep saying this, but it’s a slow process – is I would like to be making simpler music. I feel like if it’s simpler in certain ways, t hen it makes it so you can do more with it. Then again, I don’t like grooves that are so simple, that they become pedestrian.

So, I think with chord progressions, when you get into harmonic development, that’s where you can expand if the groove is simple enough. It’s nice to have some harmonic motion and interesting chord progressions. So, it doesn’t have to be I-IV-V necessarily, but then again, some of the best stuff is, or even stays on one single chord or two chords the whole song. Sometimes, if a band or a musician is playing music, it has has to be interesting on several levels, but there’s certain aspects that have to be simple, because if every aspect is complex, then both the player and the listener will get lost somewhere.

I like getting disoriented, but not necessarily lost. I like to feel like either I’m in control or the music is in control. So, if the chord progression is complex, it’s nice to have the rhythm be simple, or if the rhythm is complex, it’s nice to have the melody be simple. So, I keep playing with all of that, and I was definitely interested on the Moss album in trying to pare things down to where there is a little bit less going on per measure than on the previous album. I’m kind of in a less is more phase, but I definitely like some sophistication. It’s another one of those constant balancing acts.

HT: How would you characterize your approach to gear along the spectrum from “keep it simple” to “total gearhead”?

MG: Well, in terms of playing live, my rig is pretty sophisitcated. It’s really not very simple, but the pieces are all there for a reason. So, there might be some extra EQs and EQ possibilities, but it’s not so that I can go wild trying to make some last minute decisions on tone. It’s more that if there is a problem frequency, I can go after it and try to get rid of it to make it even.

I think that is the goal with the stage rig is to try to get it to be even across the bass, despite any inconsistencies in the speakers, or the bass, or the room. That evenness goes a long way. I like to hear some vibration from all parts of the neck. For example, I don’t like to go up high on the neck and lose the vibration, but then again, that is going to be a different kind of vibration. So, sometimes it takes extra gear to do that.

Now, on the other hand, I’ll sit in with a band and play through a bass amp that is a lot smaller and sometimes feel like, “Oh, this is easier to deal with, because the sound is simpler and also better.” So, I kind of go back and forth.

With recording, sometimes I’ll just use a little ten inch speaker and we make it sound massive, but it’s a purer tone that way. And in terms of writing and recording, there’s a lot of technology that I gravitate toward and use. I’m definitely a gadget person.

However, I’ve decided that especially with computers that having too much technology is starting to get in the way. Having a studio where there are a lot of things I can patch together, it can be just too many options. My current fantasy is to have a little shack in with nothing in it but a guitar, and no computers and no tape recorders, maybe even no notebook, no pencil, and no pen. But that’s what I’m asking myself, “Can I really do that? Can I go there and with a guitar and my head, and if I come up something, I gotta remember it?”

That would just be a phase for me if it worked though, because I like gadgets and I love to archive and record things and build a stockpile. I think a lot of songwriters have a stockpile. Sometimes, you come up with an idea, and it’s not ready yet – lyrically or musically – to come out. It doesn’t have a context yet. Then a year or even ten years later, it’s sitting there and it wants to come out. I think that’s true of most songwriters. You know, you don’t know when inspiration is going to hit, but that might not be the time you are scheduled to work on, record, or finish a song.

Technology is an interesting thing. I just got an iPhone two days ago. I had been using an old broken Flip phone for many years, and I love the small Flip phone. So, I’m having growing pains. I used to be able to text without looking at the keys. At least maybe that will mean I’ll text less when I drive.

HT: So, for a million years, Phish fans always begged and pleaded to hear one of your songs, Destiny Unbound. Back in Nassau, what led you guys to finally say “Alright, let’s play it!”

MG: It was Trey hearing an old tape. Trey does a lot of good research for Phish where he’ll listen to stuff and he will remember what things used to be like. He’ll go online sometimes. He doesn’t like to read reviews or criticism, positive or negative, but he does like to see what people are kind of wanting to hear. So, I think he might have seen a blog or something where people said,”Why don’t they play Destiny,” and then heard an old tape and liked it.

I heard the tape too. I want to say it was from Crested Butte or one of the other early Destinys, but it was really great in terms of the playing. It was just very intentional and fiery and the groove was good. I thought, “Oh yeah, that’s why he wants to play it, ’cause it’s good.” [laughs]

I had also forgotten about it. My songwriting kind of developed over the years and I’m sort of looking for different things in the lyrics and the music, but I sort of did the same thing on my hotline. I asked people what songs they wanted to hear, whether they are originals, or covers, or other people’s songs in the band, or Phish songs. For about a month, I wrote down all the answers. I wasn’t going to simply play what they asked for, but I wanted to see if there were tendencies, like a song that got more than one request. There was one song that got five requests. That song was Couch Lady from my Inside In album. And we have been playing it, but I didn’t realize that five people would request it, so I thought, “Wow, they must like that one.”

HT: As a band, how did everybody feel this past New Years Run stacked up relative to holiday runs of the past?

MG: Well, we haven’t really discussed it yet with all four of us, but I think that people really liked it a lot. I know I did. I know I had some texts with Trey, and conversations where, yeah… [pauses] I’m just remembering now. I know on the last night, I really liked the second set. Actually, I liked the New Years Eve gig, and I don’t always like the big gig. This time I did. But yeah, we definitely felt great about it.

HT: You mean, there is more pressure with respect to the big ones?

MG: I don’t know if it’s pressure. It’s like pressure, but it’s more like hype. On the big gigs, there tends to be less attention on the music. There’s just something that happens when you’re in the middle of nowhere and not on a special occasion and you’re just sort of playing. You take chances because you can, because you’re mind is going freely.

Plus, there’s a lot of other things to think about theatrically, and in terms of extra sets and extra guests around that take the attention away from that free feeling. But frankly, I think I’ve gotten better at it, and so have the people around me. We just sort of say, “This is another chance to let loose and lets not worry too much.” Sometimes nowadays it is the big gigs that feel good. In the early days, it never was. I think now sometimes it’s the big ones. 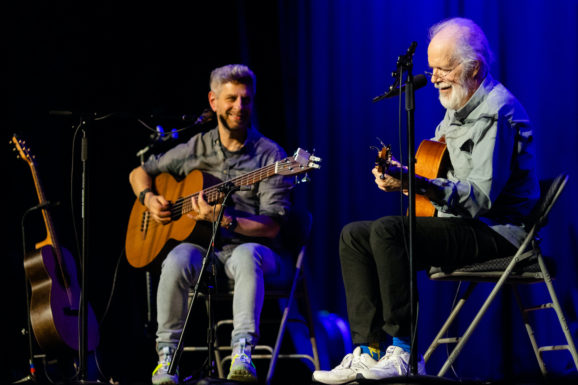 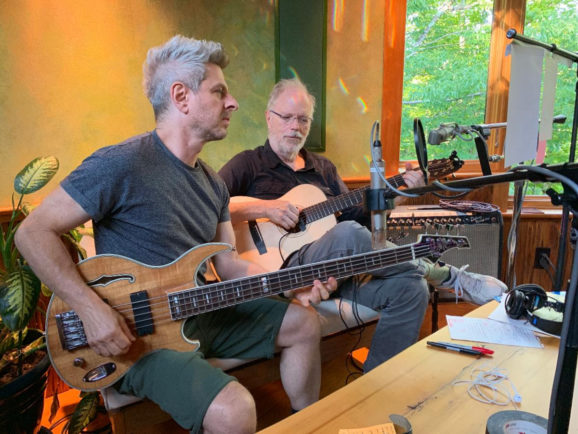