[UPDATE 6/19/13]: Well, two years after this post first ran, we’ve finally got an update on The National’s Grateful Dead cover compilation. Bryce Dessner has told Billboard, “We’re just getting going this summer, probably…and a bunch of friends in bands, and then some surprising guests, are gonna hang out and smoke a lot of pot and record Grateful Dead songs.” With that in mind, we wanted to re-share the HT Staff’s list of covers we’d like to see included.

[Originally Published: 04/21/11] Last weekend at Coachella bassist Scott Devendorf of The National revealed to Spinner.com that his band is putting together a compilation record filled with Grateful Dead covers for the AIDS charity Red Hot. The Spinner-sourced story spread like wildfire with sites as diverse as Pitchfork, The Punk Site and JamBase all filling their readers in on Devendorf’s quotes showing the potential this compilation has to bridge the hipster/hippie divide.

While Devendorf told Spinner that The National is currently thinking about covering Box of Rain or Unbroken Chain and that Steve Reich, Fleet Foxes and Bon Iver are interested in participating, he didn’t reveal much about which groups and songs he’d like to see included on the compilation. So we rounded up the Hidden Track staff to offer suggestions for a list of covers we’d pick if it was up to us…

Certain artists sing certain lyrics in certain songs in certain ways and it can just do magical things to you. Jerry Garcia was the absolute master of this, especially on Brokedown Palace. The way his voice creaked and cracked and exploded with emotion was one of the things that made each version of this Dead song special. Jeff Tweedy takes a similar approach with his vocals. Whether it’s a playful tone in Hummingbird or his scorching anger in Misunderstood, Tweedy sings from his heart and his balls, much like Jerry did. I’d love to hear Tweedy’s take on one of the Dead’s most delicate songs and one that Garcia owned every time he sang it. – Luke Sacks

Doug Martsch, an anti-front man for the ages, has already covered The Dead with his psychedelic band of wailers Built To Spill, so they seemed an obvious choice to do another cover. Who better to deliver the drawn out vocal stylings of Jerry Garcia on this slinky, funk driven, ode to scoring dope? West LA Fadeaway could provide BTS with a great live jam similar to their take on Cortez The Killer from their Live album. Jagged, angular funk could ride in tandem with howling Strats and that oh-so-famous keyboard “wooosh.” Come on Dug, DO IT! – Wade Wilby

Hailing from the great Appalachian state of North Carolina, there is hardly a more appropriate suitor for one of Robert Hunter’s finest lyrical tributes to classic Americana. As 2010 Grammy Winners for Genuine Negro Jig and one of the few African American string bands in existence, The Carolina Chocolate Drops champion a strand of musical DNA that is all but extinct. The group invokes the rustic spirit of traditional string and jug ensembles, a life-long love of Jerry Garcia. If there’s any question as to the C.C.D’s ability to do a great cover – make sure you check out their rendition of Blu Cantrell’s Hit Em’ Up Style.  – Kevin Smallwood

While there’s not much at all in common between the playing styles of The Grateful Dead and The Strokes, there are still musical themes that they both incorporate heavily into their music. Both two-guitar bands are masters of rhythmic phrases that butt up against each other like jagged jigsaw pieces. Franklin’s Tower’s bright melodies are perfect for Julian Casablancas’ disaffected vocals, especially during the refrain. Plus, the symbiotic guitar interplay of Nick Valensi and Albert Hammond Jr. is exactly what this three-chord song needs to set the verse apart from the chorus in a new way. – Conor Kelley

I’ve been shitfaced over Murder By Death for a few years now, and the Indiana band’s mix of gothic alt-country and brooding indie rock seems to gain another layer of depth with each album and tour. Their best songs are tragicomic character sketches: ramblers and boozed-up ne’er-do-wells, given voice by frontman Adam Turla’s tortured baritone, that seem to carry a world of pain and resignation behind their defiant, drunken smiles. So how amazing would it be to hear Turla and his crew, including ace-in-the-hole Sarah Balliet on haunting cello, mine the Dead’s ominous Loser for similar nuggets of portent and tragedy? Pretty damn amazing, I’d say. – Chad Berndtson

TV on the Radio – That’s It For The Other One

Cryptical, with Kyp Malone delivering evocative lead vocals, meshed with their brand of melodic weirdness would be psychedelic bliss. By the time The Other One kicks in, the groove would be so compelling and complex that the mere thought of has my head bobbing and fist clenched and ready to pump. I get excited just thinking of what the feverish energy would be like as Tunde Adebimpe’s gripping vocals reached the peak of the “Coming around…” refrain. TVotR has proven over and over again that this band can handle the delicacy and eccentricity demanded of the opening segment and the violently rhythmic turn the closing portion takes. With the tragic news of bassist Gerard Smith’s death just yesterday, imagining Malone delivering the final “you know he had to die” lyrics seems particularly poignant. RIP Gerard. – Andy Kahn

Considering Frightened Rabbit makes a concerted effort to avoid virtually any instrumental showmanship such as guitar solos or even drum fills, it’s a weird choice at face value for them to tackle the Grateful Dead. But of any contemporary band, they play to the emotional heartstrings like no other. I think Scott Hutchison’s husky, Scottish-tinged vocals would suit this heart-wrenching tearjerker in a unique and special way, and I just know they would make it their own. – Ryan Dembinsky

MGMT’s signature sound, which is heavily psych rock influenced, definitely meshes with the Grateful Dead’s roots while their electronic sound could do as much for Scarlet Begonias as the ska sound of the Sublime version. Not to mention as self admitted “jamband lovers” who have already played much of the summer festival scene, it doesn’t seem like too much of stretch for them to pay tribute to the original tie dye wearing band. If you read much about MGMT it seems likely that a few Grateful Dead covers have probably already happened, maybe in a Wesleyan dorm room or even after a long night on the tour bus? I think it would be great to hear MGMT contribute to an album like this especially given their familiarity with the music. The group’s potential take on Scarlet would be a great update to a classic song. – Carla Danca

The Hold Steady – Hell In A Bucket

With this list super heavy on the Jerry tunes, I thought I use my pick to give some love to our favorite short shorts wearing member of the Grateful Dead – Bob Weir. While Bobby was certainly adept at singing cowboy tunes and ballads, it was the barroom rockers that helped to kick sets into high gear, and for that there is really only one band to turn to, The Hold Steady. For a band that already has plenty of songs about drinking, partying, bars and bartenders how could they not be a perfect candidate to tackle Bobby’s ode to the same thing – Hell In Bucket. I can already hear Craig Finn’s nasally, rapid fire vocal style ripping through the lyrics at punk rock speed as the band applies their three guitar, classic-rock influenced crunch to it. Plus Finn even rocked a dancing bear on his guitar for a few tours, too. – Jeffrey Greenblatt

Listening to Dawes’ debut LP North Hills this morning, for probably the 1,000th time, I heard the Dead’s influence loud and clear. While many of the jambands from the ’90s were influenced by the Dead’s more jammy material, modern roots/Americana acts have gravitated towards the Dead’s songwriting-focused American Beauty/Workingman’s Dead material. Back in 2009 Dawes wrote an article for Aquarium Drunkard listing some of their favorite GD albums. In the piece they marveled at Ship Of Fools,  a tune that would be right in vocalist Taylor Goldsmith’s wheelhouse. – Scott Bernstein

Jake Cinninger of Umphrey’s McGee once remarked, “Whenever I pick up my guitar, Jerry’s touch to the instrument comes to mind. The delicate nature of his playing always helps me relax when I start digging into my axe too hard. His incredibly clean and ringing tones are an inspiration for clarity and simplicity. Jerry is one of my favorite guitarists because he could hodge-podge so many styles effortlessly; he will forever have his musical fingerprint on my playing.” Despite this obvious influence on Cinninger and I’m sure the rest of the other members of the sextet, the band (who has an exceptionally large repertoire of covers) have shied away from any recent Grateful Dead covers. There have been two brief partial peformances of Crazy Fingers by Umphrey’s McGee, the first was a 2008 solo acoustic rendition by Cinninger, and a year later a duet performance featuring Cinninger and drummer Kris Myers. They need to tackle a full tune and I think the instrumental King Solomon’s Marbles is the perfect choice. It’s one of the few GD compositions that lean a bit towards progressive rock, and UM has been blending “prog” and “jam” music for years now. Though they are not likely to get added to The National’s compilation, let’s see it happen live instead. – DaveO 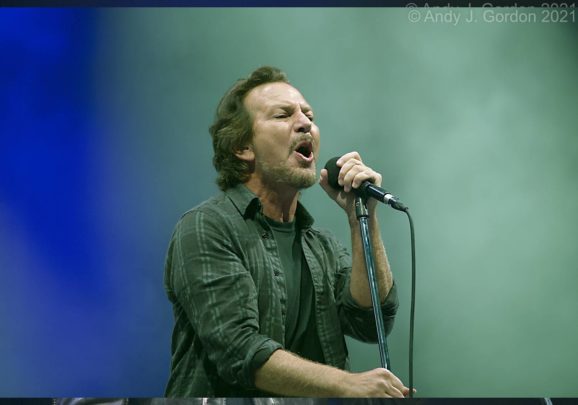 WATCH: Eddie Vedder Join The Strokes For “Juicebox” In Seattle 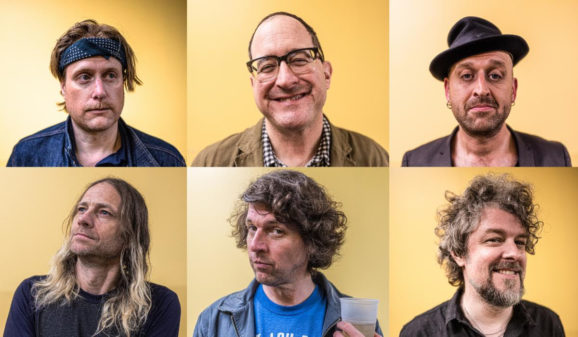