Pink Floyd is a very visual band, and this video does a good job of showing off the spectacle they presented in ’87. This pristine quality DVD starts off with a mind bending Shine On You Crazy Diamond before the band plays a number of newer tunes from A Momentary Lapse of Reason. The second DVD of the two-DVD set is all about the greatest hits. One of These Days, Wish You Were Here, and Time are played really well, and with incredible passion. Other highlights include Comfortably Numb and the Run Like Hell closer. If you are like me and biffed on seeing Floyd, download and watch this bootleg for a look at what a feast for the senses their concerts were. 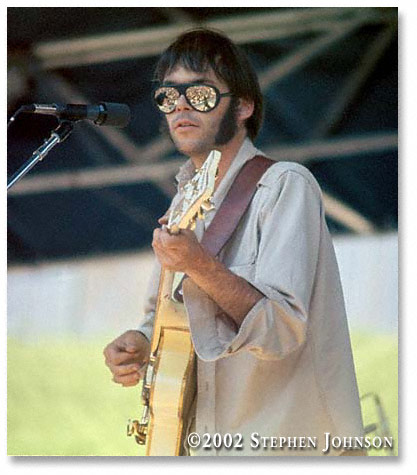 Lately we’ve been coming across a number of incredible compilations put together by dedicated fans. This week we came across a doozy — the best of Neil Young’s monumental Time Fades Away ’73 tour. This one-disc set starts off with nine songs from Young’s performance at Washington and Lee University before finishing with seven tracks taken from a concert a few months later in California. The final four songs feature Young’s old band mates Graham Nash and David Crosby.

The quality throughout this recording is incredible; you’d almost think this was an official release. The Time Fades Away tour took place at a crossroads in Young’s career. Crazy Horse guitar player Danny Whitten had just passed away after a heroin overdose, and Young took to the road with a new backing band called the Stray Gators. The band played mostly new songs, and at the time Young’s fans were critical of the material. The songs have aged well, though, and the Stray Gators do a fine job of backing Young. Highlights from this compilation include Sugar Mountain, Heart of Gold, and a nasty Southern Man where Young was joined by Crosby and Nash.

A good friend once told me “Sometimes shit happens, and you just gotta roll with it.” moe. did a nice job of rolling with it when Mother Nature nearly ruined the third annual All Good festival in 1999.

Deep Banana Blackout was knee deep in the funk during their set at the festival when a monstrous storm moved in. All of the sudden a huge burst of wind toppled the festival’s lighting rig. Luckily no one was hurt, but after hours of trying to get the show on the road, the festival promoters were about to throw in the towel. moe. wasn’t about to be denied and borrowed acoustic instruments from various performers. The band went on to play a fun, completely unorthodox unamplified set full of never-played before covers and rarities for the gracious crowd.

moe. sound guru Steve Young taped the set, and someone recently posted the show on the Live Music Archive.

What have you been listening to this week? Let us know by leaving a comment below….