Since its inception in 1991, Lollapalooza has strived to offer diverse lineups covering all corners of the musical globe and beyond. Born out of the grunge movement, festival founder and mastermind Perry Farrell put together a traveling music festival with some of his best friends. Early lineups featured the likes of Pearl Jam, Nine Inch Nails, The Smashing Pumpkins, Beastie Boys, Red Hot Chili Peppers and Jane’s Addiction. The festival went through a period of inactivity from 1997 until 2002, but was jumpstarted in 2003, though it was very short lived. After canceling the 2004 traveling tour, festival organizers announced that starting in 2005 Chicago would be the permanent home of Lollapalooza as the fest changed format to become a destination event.

This year’s Lollapalooza will be remembered most for one thing: the evacuation. It was definitely one of the most surreal concert experiences I have witnessed in my 20+ years of going to shows. I am not trying to take anything away from the music, but the idea of moving 60,000 people in and out of Grant Park in less than three hours in a peaceful fashion was quite the feat.

Overall my my experience at this years Lollapalooza was pleasant. The festival organizers have been tweaking the grounds each year and the layout this year worked very well. Columbus Avenue, which serves as the main artery of the fest, boasted plenty of bathrooms, food options and beer stands. Fans who looked to escape the weekend’s oppressive heat were able to refill their water bottles at stands throughout the park and could also seek refuge under trees that lined the perimeter of the park. All of that aside, this past weekend’s Lollapalooza offered something for everybody’s musical palate, but the problem with that is that there isn’t enough time to get a little taste of everything.

Here is a little taste of what I saw….

Fans who braved the absolutely brutal Chicago heat were treated to a great early set by Yellow Ostrich. Lead singer / guitarist Alex Schaff and company commanded the stage with songs from their latest album, Strange Land. Schaff’s edgy guitar riffs work perfectly on top of a tight rhythm section that included multi-instrumentalist Jon Natchez and drummer Michael Tapper. The songs ranged from ballads to gritty power pop including the very catchy Marathon Runner. Lollapalooza is definitely a marathon and pace is key to the weekend.

The War on Drugs 45-minute set at the Google Play stage seemed like miles away from every other stage on the festival grounds. Tucked away from the sun in a shaded corner of Grant Park, the Philadelphia natives delivered a set that featured their signature style of ambient folk rock. Adam Granduciel’s vocal delivery throughout the afternoon was a cross between a young Bob Dylan and The Boss. Comin Through was drenched in reverb while the band had a total U2 moment during All Roads Lead to Me. The band was comfortable stretching out tunes as far as they would go until breaking free from their structure.

Taylor Goldsmith’s songwriting skills have grown immensely in a very short time. The L.A.-based band delivered their fresh brand of Americana during an impressive set. Fans got a taste of Goldsmith’s songwriting skills through the plaintive A Little Bit of Everything. His incredibly vivid imagery placed fans in the middle of the different story lines throughout the song. The animated Griffin Goldsmith was a restrained version of Animal on the drums during Fire Away. Taylor Goldsmith appreciated the crowd’s enthusiasm and was happy to lead a sing a long to When My Time Comes. Before performing a new song called From A Window Seat, Goldsmith announced that that the band would be entering the studio to record their third album soon.

Shortly before Black Sabbath took the stage, a retrospective video of Sabbath through the years played on the large screens that flanked the stage. Led by Ozzy Osbourne, the Kings of Heavy Metal tore through the band’s catalog in an impressive 90+ minute set. Ozzy was Ozzy throughout out the set. He greeted fans a number of time with “I can’t fucking hear you,” but didn’t stray too far from his mic stand during the performance. While Ozzy’s vocals weren’t always sharp, he did sound very good at times and even showed off some harmonica chops on Wizard. The slender Tony Iommi stood solemnly stage left with a smile on his face. His recent and well documented bout with cancer didn’t show in his playing. The guitarists armed with his well traveled red Gibson SG played his parts with rigor. The trio of Sweet Leaf > Drum Solo > Iron Man proved the band still has it.

The band was definitely aided by the youthfulness of drummer Tommy Clufetos after original drummer Bill Ward was not able to come to a financial agreement with his bandmates. Despite Clufetos’ youth, the rest of the band wasn’t left behind in his wake. Bassist Geezer Butler, the most animated of the original three, fired up some high speed bass lines with some speedy fingerwork. A spirited and well played version of Paranoid brought Friday night’s music to a close.

Just as J.J. Grey & Mofro took to the stage at 3:15, ominous clouds started to make their way to Grant Park. The Jacksonville, Florida natives were 15 minutes into their set of southern rock, when front man J.J. Grey announced that there set was ending abruptly due to some severe weather moving into the area.

In light of the tragedies in Indiana and Toronto, festival organizers temporarily suspended the festival and evacuated the entire park due to a very powerful storm that was bearing down on the unsuspecting festival goers. The crowd of 60,000 exited rather peacefully, and dispersed in different directions throughout downtown Chicago. Lollapalooza officially become Stormapalooza. The wicked storm, which packed 60+ mph winds and rain that seemed to fall in all directions, pummeled the city and sent people running for cover wherever they could find it.

Shortly after 6 PM the gates opened up and the mass migration back into Lollapalooza began. People began the arduous task of meeting back up with friends and perusing the revised schedule.  Neon Indian, B.o.B and Alabama Shakes were some of the victims of Mother Nature. The field at the south end of the park resembled the legendary Glastonbury mud fields more than Lollapalooza. It was a muddy mess.

The Red Hot Chili Peppers closed out Saturday’s festivities with a storm of their own. Thunderous funk grooves along with sing alongs from throughout their 20+ year career helped everyone forget about the mass evacuation that went down just a few hours earlier. Anchored by Chad Smith’s emphatic drumming and Flea’s rumbling bass lines, fans danced the night away barefoot in puddles of fresh mud.

Flea and guitarist Josh Klinghofer made most use of the sprawling stage by running and jumping through most of the band’s set. The hard funk groove of  Suck My Kiss had the entire audience grooving wherever they could as the bowl was swelling with people. The show-closing Give It Away featured Kiedis’ rapid fire vocal delivery as well as a Sweet Leaf tease at the end of the song  as a nod to the previous night’s headliner – Black Sabbath.

If the Bowerbirds were tired, they showed no signs of it on stage. The band made the 2,000+ mile journey from Happy Valley, Oregon where they performed at Pickathon the day before at noon. Fans stood on drying compound layered on top of one of the muddy baseball diamonds to watch the North Carolina natives deliver a set full of rich vocal harmonies and dreamy synth melodies. A “rearranged fun version” of Stitch The Hem perked up the the early birds with a calypso-style beat. The band worked in a new song in which guitarist Phillip Moore sang ” I seemed to believe in brighter days” with optimism, while a mixture of distorted guitar and crashing cymbals created an ominous back drop to the song. The set ended with Beth Tacular walking up and down the keys of her red Korg synth during a lively Tuck The Darkness In.

“This is pretty cool, for us at least” guitarist Dave Simonett noted as the band took the stage for their mid-afternoon set. The Duluth, Minnesota natives performed everything from newgrass, alternagrass, heavy metal grass and some good old fashioned bluegrass for their high energy set. The band did a great job of blurring the lines of genres while keeping true to their traditional bluegrass roots. Mandolin player Erik Berry held his instrument in the cradle of his arm while playing with precision and Ryan Young had his fiddle sounding more like a guitar at times with his virtuosic playing. The band either cranked up the RPM’s on their instruments or might have been battling a few nerves as they finished their written setlist before their time was up.

Wearing a black fedora and short-sleeve shirt and jeans, Gary Clark Jr. strolled on stage, guitar in hand and wasted no time getting things started. The 28-year-old guitarist kicked the set off with a 10-minute blues rock jam that was immediately met with the crowd’s approval. Showing incredible confidence on stage, Clark showed why he is not only a gifted guitar player, but also a soulful singer. At times he resembled Curtis Mayfield with his silky smooth voice. The woman who was signing for the deaf fans was taken over by his energy and played some wicked air guitar and danced in the spirit of the moment.

A mesmerized crowd watched in awe as Sigur Ros crafted music that was as dramatic as it was beautiful. Jonsi utilized a bow on his guitar instead of a pick  and sounds that resembled a whale call more than a guitar. With their lyrics mostly unintelligible to the masses, the band let their music do most of the talking. Jonsi’s angelic falsetto voice somehow found comfort in the powerful waves of sound the band often created. The giant screens on both sides of stage projected the bands performance in black and white with ghostly images layered in the foreground. A mid-set spine tingling version of Hoppipola showed the power and passion of the band’s music.

One of the highlights of the festival came in the form of the blind husband and wife duo, Amadou and Miriam. Hailing from the African country of Mali, the couple stood side by side both wearing traditional African dress. They worked the crowd with their overwhelming charm. Armed with a very shiny gold Fender Telecaster, Amadou played some impressive guitar that mixed many different styles of music while Miriam shared vocal duties. During the upbeat Africa Mon Afrique, the band showed incredible chemistry and timing as they went from section to section without missing a beat. You couldn’t help but smile and dance as you watch this couple show just how inspiring music can be.

Epic. That is the only way to describe the former White Stripe turned prolific songwriter/producer’s closing set. The nearly two hour affair had everything from blues to punk and at times White mashed genres up as only Jack White could. Backed by two separate backing bands which included, bass, drums, keyboards, pedal steel and fiddle, White was absolutely was a monster on his guitar and occasionally hopped on his piano. His first band consisted of a very well dressed group of gentlemen that looked more ready for a fashion shoot than to play some rock and roll. White assumed the role as ladies man with his second group. Assembling a knockout lineup of ladies that were no slouches on their instruments, White had little time to talk as one song bled into another and head spinning speeds. The show closing Seven Nation Army drew a huge cheer from the crowd and showed that White is not only a incredible musician, but a showman at heart. 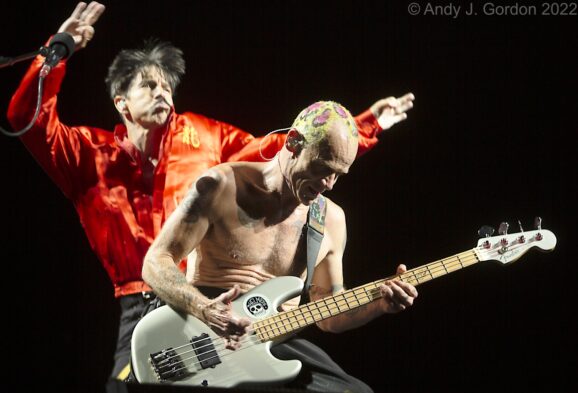