Perry  Farrell is breaking ground again…this time from far above the Earth with his latest creation, Satellite Party.   An innovator in the rock industry, Farrell fronted Jane’s Addiction in the ‘80’s and Porno for Pyros in the ‘90’s.   He then masterminded what would become a powerful vehicle for alternative rock music: Lollapalooza — the festival that encapsulated American youth culture for the 1990’s much as Woodstock did for the 1960’s.   This traveling concert experience brought underground cultures to cities nationwide and eventually landed a permanent home in Chicago in 2005. Once again, Farrell is launching a musical movement with Satellite Party’s debut album, Ultra Payloaded, due to hit stores the end of May.

Satellite Party is born out of Farrell’s passionate belief that one step at a time people can transform the world.  He knows firsthand, as he’s always used music to inspire change.  First, when he took proceeds from Lollapalooza to work with the Costa Rican government to help preserve the rainforest.  And secondly, when he raised a substantial amount of money for the relief fund and rescuing of slaves in Sudan.  Now Farrell’s mission goes green with Satellite Party’s commitment to work closely with Stop Global Warming and Global Cool.

Ultra Payloaded covers an amalgamation of sound from vintage new wave to techno-dance to industrial metal  – all orbiting around a symphonic hum.   The first single, “Wish Upon a Dog Star” beats with a Cure-like bass line, while “Kinky” echoes with the new metal, big-string sound of  Jane’s Addiction.  The softer side of Farrell shines in a U2 sort of light in “Awesome” as well as in the ethereal “Milky Ave.”

Glide had a chance to talk with Farrell while his feet were planted firmly on the ground in Venice Beach, California.  With all his accolades including the Jane’s Addiction hit, “Superhero” on the HBO show Entourage,  it’s nice to see that Farrell is relatively down to earth…

Where did the name “Satellite Party” come from?  And then you have to spill the beans about Jane’s Addiction” as well…
Okay.  Believe it or not, “Satellite Party” was a song I had written eight years ago.  The record company I was with had asked me to write an additional song for an album and I came to them with this lovely song which was progressive.  The way it was produced was a hybrid of sound and they thought the music was just too far out there.  It was just one simple song that I decided to write this theme around – and that was the Ultra Payloaded Satellite Party.    And Jane’s Addiction came about obviously from my roommate, Jane.   My lovely (laughs) friend Jane.  She’s still around.  I recently saw her.  She showed up on the Tyra Banks show as an “It” girl (laughs)…hilarious, but she’s a sweetheart.
When was SP conceived?
In 2004.  The week that Jane’s Addiction split …that very same week Lollapalooza went dark.  And I holed up in my garage and went to work on writing Satellite Party.  That was around June or July of 2004.  And now we’re just lifting off.  These days are wonderful for me.  I’m often asked when I began the project and concept and for a moment when I have to explain when it started in the beginning it was obviously a very sad and traumatic time, but within that change came some very strong inspirations and emotions.  Now I’m happy because I’m doing interviews and the music is completed.  We have a label and we’re starting a tour and the radio has been very magnetized to the music…ya know, all those wonderful things that a musician craves for have happened.
And who are the Solutionists?

Well, the Solutionists are the masses.  They are individuals who are now taking on a new consciousness and coming up with solutions.  Even if they’re personal solutions to end global warming and transform the world — to beautify the world.  So they start with a very small collective of people – artists, musicians, environmentalists and it bleeds out.  Once the crew, shall we take it,  reach out into the public and start to do demonstrations and public gatherings they just gain force and get their goals met.

What are some solutions you have in mind?

I was reading this morning how people are changing the way they produce their products…kind of a ‘cradle to cradle’ concept.  Our producers are doing this where they’re becoming a service rather than selling products that ultimately end up in a pile at the dumpsite.  Now instead you hand the product back to the company and the company strips the materials back and remakes another product.

…another avenue of recycling?

Yeah, it’s a form of recycling that goes into the business model.  It’s re-forming your product out of the old product…basically recycling old materials so that there’s less mining or stripping and cutting down trees.  You have the materials at your disposal, they just have to be reused.
What are some other ways our listeners can contribute to your quest?

Another giant idea that goes to the homes on a personal level is similar to that funny “clapper” invention that a lot of people thought of as a novel contraption.  Right now one of the biggest problems we’re having is global warming and when people leave their house, they’re still using a ton of energy and a ton of heat because there’s amps and power that’s going into their appliances.  If you had a system where you could turn off the lights and power when you left your house – sort of the way you do now when you leave a hotel room.  You leave your room with those cards and you pull out the card in the door and all the power goes out.   If you could put those into a home where when you leave everything gets unplugged, you can just imagine how much energy you’d be saving.  That’s a solution that can be easily put into action by an electrician let’s say.    You’d be saving so much money on energy bills and helping the world.

Apparently Jim Morrison’s poem in your song, “Woman in the Window” is an unreleased work from over 30 years ago.  Why did you choose this poem?

I was writing a story for Satellite Party and the song came into my life.   At that time, there were a few other musicians that were also interested in writing and I would co-write songs with them.   I would always be driving the lyrics obviously because that is what they came to me for…lyrics and voice.  But in the case of Jim Morrison, his song was fixed.  When he was singing, the way I interpreted his song was that he was singing from the vantage point of an angel…a heavenly spirit, shall we say.  He was looking at the world from above.  It perfectly suited the Satellite Party in the sense of the ‘satellite’ part.   I look at it like it’s a miracle that sometimes happens in life — rarely, but in this case it was just an amazing experience.

And why is this song the mantra of the Solutionists?

The line in the song, ‘Just try and stop us, we’re gonna love’…he explains to the Solutionists that one night they’re lulled to sleep by the humming of the radio.  What it really is in fact, is this hypnotic-sounding voice and it is the heavenly host, Jim Morrison inviting them to a party – his version of a party in the heavens.  When they are with him that evening,  they’re watching the world from above.  He explains how he watches the universe from this vantage point and sees the work the Solutionists are doing and the parties  they are throwing…and he points to the polar caps and tells them how he likes to make ice swans out of them with a laser.  But the problem is that these ice caps are melting and something has to be done.  It’s very telling about how endangered the world really is and what a precarious situation we are in.  So, he invites them to legitimize themselves and create a new initial.   And along with the heavenly host they sing altogether, ‘Just try and stop us, we’re gonna love.’  You know, obviously the tried and true method…love conquers all.  And this is just a re-application of that idea.
Satellite Party at Lollapalooza?  What was that like?

Well, it was good but I was struck by the heat.  That day happened to be the hottest day on record in Chicago.  But I kinda feel like it was obviously a sign that there is work to do pertaining to global warming…the ice caps were really melting that day.  It was difficult to pull it off, though.  I’m used to performing in the heat, but this was scorching heat.  Plus, I think the group is much more developed since then and more people are listening to the music now, so it makes things easier when we all get together — the connectivity of having heard the music obviously is a better situation to play in.
You were a pioneer for alternative rock…do you consider yourself a pioneer again with SP?
Well, I have the good fortune of having been around for a long time.  When I entered the Los Angeles underground music scene back in the beginning of the ‘80’s,  I was a kid who really looked up to these guys that were wearing the leather jackets and spiked out hair.  They were much cooler than me and I was a guy who was just trying to break into the circle, ya know?  But why I’m telling you all of this now is I’ve had years of experience so although I’d like to say, ‘Well, yeah I just keep comin’ up with these ideas and breaking ground’, I’ve had a lot of time and I’ve developed through the alternative.  So what we’re gonna do now with Satellite Party is a step out.  It’s a break out from alternative music — punk and post punk.  In fact, the term “solutionist” comes from looking at the punk rock movement and seeing that it’s the last great movement in art and music, but it fell short in that it was antagonist but inevitably it didn’t have any great solutions.  So the next step is to become powerful — to have solutions.  Punk rock was always one to  claim there is no future.  Solutionists claim, ‘Yes, there is a future and here’s what it is.”
If you were to look at Satellite Party as a vessel for a greater movement what would it be?

I think we’re going to transform and beautify the world.  Within 10 years time, we’ll have people off fossil fuels and into renewable fuels.  We’ll reduce carbon emissions by 6 billion times and we’ll prosper and have a more playful life.  (pause)  That’s pretty big, isn’t it? 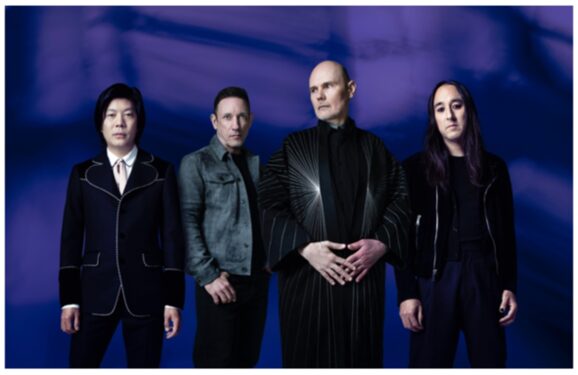