House Mixologist Dan Alford is away this week, so we’ve turned to our ol’ pal Neddy for some downloadin’ love. Neddy’s offering for us features a “little roots music focusing

Umphrey’s McGee‘s Andy Farag has had quite the week. On Monday the band sang the national anthem at U.S. Cellular Field for the Chicago White Sox home opener. Tuesday UM released their latest album, The Bottom Half. Tonight and tomorrow, Andy and his bandmates head to the Murat Theater in Indianapolis to record a live album.

The Hidden Track Baseball Preview moves into the late innings as we catch up with Andy to discuss his beloved White Sox, as well as this weekend’s shows:

Scott Bernstein: How was your performance at the White Sox’s season opener?

Andy Farag: It was great man. I got there like an hour earlier than we were supposed to be there so I could take it all in. We probably sang our best anthem to date. There was a flyover, so we had to time our singing. We had to sing it at the same tempo they timed it at. It was perfect: literally two seconds after we were done this jet came screaming over our heads.

SB: The outcome wasn’t so great in that game, huh? Contreras didn’t look so hot.

AF: No, he lasted two innings and just left everything over the plate. The Indians are a good offensive team and they took advantage of us, that’s for sure.

Read on for more of Scott’s interview with Andy Farag…

The Chairman Returns to the Boards

It just felt right. No place we’d rather be on a random Wednesday night in April than the 499-capacity Gramercy Theater to watch the former keyboardist for the popular rock band Phish sit down at his rightful place behind a new set-up, Chris Kuroda bathing him in the familiar tones of the light rig.

So you can imagine that even before the music began in earnest, we’d been sold our bill of goods. Thankfully, though, the same genuine enthusiasm for Page’s new band and material left with us on the way out of the theater.

Our Page Permagrins emerged the minute the concert started, with McConnell busting out a solid instrumental called Back in the Basement. From there he played the entire album, and we loved nearly every minute of it. Songs that were five minutes on the debut solo disc became 15-minute jam sessions. And save a few exceptions on either side, the jamming of this band is infinitely more palatable than the improvisations of a certain red-haired guitar player’s recent bands.

Rumors have been flying fast and furious about which musicians will round out Phil Lesh’s lineup of Friends at the two stealth SOBs shows in New York next week. Trey

Mike Gordon is still missing. Ever since his buddy Trey informed us of Gordo’s supposed one-year hiatus from playing during his interview at the Y, Cactus has been noticebaly incommunicado.

Wilco has announced some North American dates in June at some of the best venues in the country. The Pines in Northampton is one of the coolest places I’ve ever 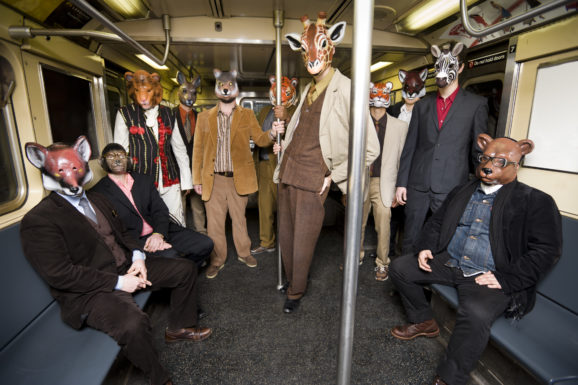 I've wondered about their staying power and ability to emerge from behind the long shadow of Fela Kuti and assert a fresher, more developed sound. At their album-release party (for Security) at the Warsaw in Brooklyn on March 10th, all doubts were laid to rest.

Pollstar reports that Arcade Fire, Air, The Polyphonic Spree, Laurie Anderson and jokester Ricky Gervais are among the artists hand-picked by curator and co-founder David Bowie to perform at the

Spoon, Booker T. & the MGs, Drive-By Truckers, the New Pornographers and Sharon Jones & the Dap-Kings have signed on for the summer-long River to River concert series in New