I’ve been lucky enough to have seen most of the covers and originals in Phish’s repertoire, but I haven’t seen them all. And unless your name is Trey Anastasio or Mike Gordon, you haven’t caught every song either. Which raises the question: what songs do you most want to see the recently reunited quartet bust out this summer that you’ve never seen them play before?

9. Glide Pt. 2 – There aren’t many originals that Phish only played one time, but a song that’s either called It’s Time, Glide Pt. 2 or Flip is one of them. Ever since they debuted this tender ditty at Lowell in 1995 I thought it would make the perfect breather between Mike’s and Weekpaug. Odds: 1,000 to 1

8. Walfredo – For the quartet’s European tour in February 1997 they learned two songs on which each band member played a different instrument than they usually play. Walfredo was one of them and Rock-0-William was the other. Rock-O-William was dead on arrival but the band did bust Walfredo out in Las Vegas as the opener to their second show at the Thomas and Mack in September 2000 giving us hope that it will rise again unlike the south. Odds: 350 to 1

READ ON for the rest of this week’s B List…

A few months back, our very own Ryan Dembinsky headed over to the Rock & Roll Hall Of Fame’s New York City Annex for a great profile on the relatively

2009 has been a pretty good year for the Disco Biscuits, and the Louisville, Covington, Asheville stretch to close out the tour would hopefully be no different. Three All-American cities, each with their own unique charm, amazing spring weather and dirty untz jams. What could go wrong?

Something did go wrong back in January, when Mother Nature decided an ice storm would be nice for everybody, causing unsafe travel conditions, and Headliners in Louisville, Kentucky to lose power. The Disco Biscuits did more than make up for the cancellation by announcing two Kentucky dates before the tour closer in Asheville. 2009 has seen some incredible Biscuits shows, and these three would end up right on par with the rest of this stellar year.

After simply laying eyes on Headliners in Louisville, Kentucky it was immediately clear that everyone was in for a special night. This is the kind of place that the Biscuits really seem to thrive on. It is a small intimate venue in the middle of nowhere. The fast moving lines and friendly security really helped move the large crowd along smoothly, a crowd that almost looked too large for the tiny venue. Despite the size of the crowd there was still tons of room for the kids to get down, and Biscuits fans know how to get down. READ ON for more from the Biscuits’ recently completed tour…

Last Week’s Sauce is a recurring column featuring recordings of shows that took place the previous week. Thanks to dennisrtyler for this week’s photo.

During the Q&A session following the New York City screening of Bela Fleck’s musical travelogue to Africa, Throw Down Your Heart, Bela introduced the film’s talented director and his younger brother, Sascha Paladino.

Bela explained that he and Sascha did not really know each other so well growing up in New York City. Being 17 years Sascha’s senior, Bela’s musical career was just taking off, taking him far from home for the better part of Sascha’s formative years; so much so that Sascha referred to Bela as “that weird guy who just showed up at holidays.”

Hence, what better a way for two brothers to bond, than to pack up the banjos, heaps of film and audio gear, and a ridiculously talented recording engineer and head for Africa to make a documentary?

You are probably thinking “haven’t we seen this whole musicians travel to Africa thing before?” (i.e., Trey & Dave’s VH1 documented road trip in Senegal), but you would be doing yourself a massive disservice by forgoing that conclusion. As the two brothers traverse the massive continent, stopping in Uganda, Tanzania, Gambia and Mali (as well as Senegal if you count car troubles), Bela and a colorful assortment of local musicians overcome traditional communication barriers to conjure up what can only be described as heartwarming magic.

Björk announces a very special DVD/CD/VINYL recording, Voltaic, to be released in the U.S. by Nonesuch Records on June 23, 2009. Available in five different physical configurations, Voltaic is a

Deerhunter and Dan Deacon have announced that they will be hitting the road together for a unique US tour this summer. The three bands are not only joining forces for 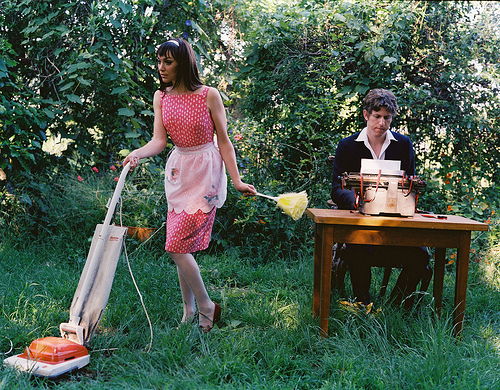 The Bird and the Bee

While other male/female duos like She & Him, have graced the covers of magazines, The Bird and the Bee, have made a fashionable statement while making sounds from the 60’s and 70’s sound contemporary.