It’s time for the finale of our week-long look at Phish Fall Tour statistics. Each day this week we’ve been sharing a new installment of our geekiest column, The Number Line, where we analyze the setlists from Phish’s recently completed Fall Tour. On Monday we examined the Fall Tour one-timers, on Tuesday we looked at the songs played on the tour by studio album, on Wednesday we detailed the covers Phish performed and yesterday we shined a light on the originals. Today, we’ve got a mixed bag…

46 – Songs with one word titles
31 – Minutes between last song title tweeted by @Phish and tweet about that night’s LivePhish recording being available (quickest of tour)
29 – Most letters in a song title (Stealing Time, BBFCFM)
25 – Most Songs Played in a Show (11/29 – Maine)
18 – Least Songs Played in A Show (11/25 – Philly 2)
13 – Number of different songs that opened the second set (no song opened the 2nd set more than once)
11 – Different Sources of Audience Recordings of the Charlottesville show (most of any show) available for download on bt.etree.org [via db.etree.org Source List]
8 – Most words in a song title (MMGAMOIO)

As many of you read last week, I talked about some of the great old-school restaurants around my hometown of West Orange, NJ that have been around for decades. Funny thing is the same day I post this story, a friend sends me a picture of him and Buddy – aka The Cake Boss at Carlo’s Bakery in Hoboken. My friend Jeff and I go back to when were kids. I asked him if it was worth taking a day trip out to Hoboken in the rain on Saturday. He said yes, but not to go to Carlo’s but to Fiores’s at 414 Adam Street.

The reason why Saturday was the right day is that every Saturday (and Thursday) they sell their special roast beef sandwich with their famous homemade mozzarella and topped (and dipped) into gravy. There was a “right way” to go about getting your sandwich. The Hoboken Guy who like me was a “Fiore’s virgin” documented his experience so well. Read his posting, it is a fun food trip. Along with my sandwich (pictured below)

I also got a pound of their homemade roasted peppers with garlic & one pound of the hot cherry peppers stuffed with provolone & prosciutto (sorry no pix of these, but they are to your left when you walk in). They also do amazing sundried tomatoes. It is about a 15 minute walk from the PATH Station but so worth it. READ ON for more Friday 4 the Foodies…

Phish could be America’s most tolerant band, and if they’re not, I’d love to see the act that can top their patience. After all they’ve been through over the course of 26 years, that they can still laugh at the occasionally obnoxious antics of those who pay to see them is a testament to their fortitude.

The quartet’s tour-closing show at the glistening new John Paul Jones Arena in Charlottesville featured, along with plenty of high-octane music, guitarist Trey Anastasio getting pelted with a glowstick and a naked person disrupting the show – things that would likely provoke a petulant frenzy from many artists of similar stature. Ever vigilant of the crowd’s mental temperature, even in a cavernous arena, the band turned the latter incident into another of their career’s many idiosyncratic touchstones, taking someone else’s very brief (and subsequently painful) moment in the limelight and shaping it into crowd-pleasing revelry.

Vermont’s most famous band ever displays the hardiness inherent in those who inhabit the frozen expanse of their home state, and they’ve applied a strong work ethic while knocking off the clumps of rust and ruin that followed their 2004 “breakup.” In 2009, Phish have steadily gotten their groove back. It’s been a slow process, like a springtime thaw, but the latter part of the Fall 2009 tour was awash in the sound and spectacle of a band finally starting to resemble their former, fantastic selves. After a three-night stand at Madison Square Garden, the band opted to close the two-and-a-half week tour in the relatively tiny town of Charlottesville, VA, near the town of Crozet, where their management company and merchandising outfit are headquartered.

READ ON for more from Bryan on the Charlottesville show…

While we may have wished for rap-rock to fade away in the past, we couldn’t be more pleased with the results of The Black Keys’ latest project – Blakroc – that

The second season of the Elvis Costello-hosted Spectacle debuted this past Wednesday night on Sundance featuring special guests Bono and The Edge of U2. If you missed the debut, you

AM Takes Flight With Air

Los Angeles-based musician AM has been invited by French electro-pop kings Air to open their first North American tour in three years. Kicking off March 13 in Miami, the jaunt 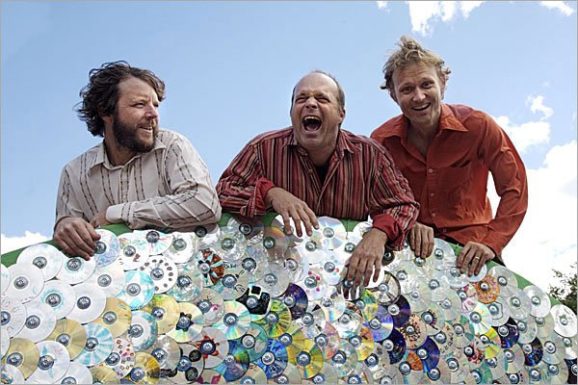 Medeski Martin and Wood have never enjoyed themselves so much in Vermont as on their Higher Ground appearance December 3rd. Perhaps it's a comfort level arising from nearly annual visits to the Green Mountains for a decade or more, but just as likely, the trio's obvious delight derives from  a sense of renewed pleasure in playing together in the wake of the recently-completed 'Radiolarians Series.'

Flight of the Conchords Not Returing for Third Season

HBO musical-comedy series "Flight of the Conchords" will not return for third season. After months of speculation, co-creators Bret McKenzie, Jemaine Clement and James Bobin broke the news on their