For the second in the ongoing Steve Kimock series here at Stormy Mondays, we go right to the heart of his music with the classic pairing of Cole’s Law >

We’ve got two new Phish-related iPhone apps to tell you about and they both look pretty damn cool. First up is Phanatic which offers setlists and statistics from every concert Phish has played over the past 26 years and will be updated on the fly with future setlists as the shows happen. Also available is the iDIDN’TKNOW pack featuring five fun games about the band including Professor Mulchahey’s Phinal Exam, Phanagrams and Fuzzy Math.

Both apps are currently available through the iTunes store with a portion of sales from each going to The Mockingbird Foundation.

There’s plenty of links to share, so let’s get down to business…

Finally, The McLovins have just released a new EP entitled Virtual Circle that features the title track and Hell Yeah, both of which will be on the boys’ sophomore release come next summer. You can download both tracks for a mere $1.98 through the trio’s website.

READ ON for three more news stories of interest…

Pullin’ ‘Tubes: Dave Against The Machine

Singer-guitarist-songwriter-producer David Rawlings is probably best known as Gillian Welch’s longtime musical collaborator, the duo have been singing and recording together since the mid-90s. While it’s been six years since

New to Glide: Best Albums of the Decade

As the ’00s come to a close, it’s time to take a look back at a decade that saw the recording industry implode. Our corporate parents at Glide Magazine put

The New York City trio have spent the last 18 years annihilating all the rules they learned growing up playing jazz and classical while recording and performing. Past shows see-sawed between mid tempo, raucous and dirty funk to shrieking, crashing and amorphous soundscapes that often left people slackjawed and staring. Neither side ever really took over at their concerts. MMW’s shows were in a constant state of flux.

Then they had this Radiolarians idea: write real basic roots for songs, tour, then record. Repeat twice. Now at the end of this experiment, the band just released the Evolutionary Set, a box set with all three Radiolarians albums, a remix disc, a live disc and a DVD directed by Martin. With this sizeable influx of new material to work with, the trio still played zealous and risky at their recent Chicago appearance, even while sticking to the new songs. Trying to figure out what songs the band was playing at past shows could be an exercise in desperate futility, as their sounds would snake like mercury in a blurred combination of composed and improvised music. But somehow MMW found a way to play more loosely, more at ease, maybe a little freer…while staying close to what they wrote.

With any experiment comes the afterbirth: the criticism. More specifically, critics that gave up on them throughout this recent chapter in their music by applying the jam band label. It’s not a curse word, but throwing that title on because they frequent the festival circuit and have a handful of dreaded folks at their shows paints the trio into an inaccurately narrow corner. These days, the band is not only working with their brazen disregard for melody found on The Dropper, but also with the simple fun of their children’s music record Let’s Go Everywhere. At their recent stop in Chicago, MMW showed their own commitment to even growing out of themselves and what has characterized their shows for many years by adding simplicity and more structured songs to their repertoire.

READ ON for more of Benji’s thoughts on MMW…

As we hit the mid-point of Hannukah tonight (or Hanukkah or Chanukah – take your pick), we thought we’d get into the holiday spirit and share the new animated video

The Coen brothers fantastic flick O Brother, Where Art Thou? (CMT, Wednesday at 9PM) isn’t about music per se, but the soundtrack is a major part of the movie’s appeal. 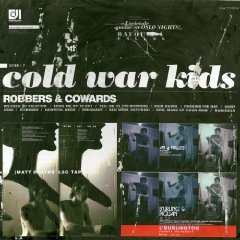 Glide’s Best Albums Of The Decade

After scrambling through the past decade in music, our staff at Glide narrowed our picks for the 50 best albums of the 00’s Not that our favorite albums are any more important than your favorite, but since we are a music magazine – isn’t that what they do at the end of each decade. Enough said, here they are..

Two crowdmembers have been arrested after attacking Jay Reatard during a gig in Austin, Texas. Reatard had taken to the stage at the Emo’s venue around midnighton Wednesday (December 9)