Later this week, guitar wizard Steve Kimock is playing a pair of exceedingly rare solo acoustic gigs at The Stone in Manhattan, a John Zorn performance space. It promises to

Umphrey’s McGee might be off the road for most of May, but don’t let that fool you into thinking it will be a slow summer for the Midwest jammers. This afternoon the group announced their summer tour which includes their first-ever headlining gig at Red Rocks, appearances at Wakarusa, Bonnaroo, Nateva, All Good, Forecastle and Gathering of the Vibes, a co-bill with moe., an opening gig for Widespread Panic and plenty of two setters.

Leading up to Wakarusa, Umphrey’s will play at the House of Blues venues in New Orleans (June 2) and Dallas (June 3) with PGroove frontman Brock Butler opening at each show. Other gigs of note include performances at the South Shore Music Circus (July 29) and Cape Cod Melody Tent (July 30) in Massachusetts, two venues that feature stages “in the round” with stages that slowly rotate. Hopefully the band will utilize those stages.

Pullin’ ‘Tubes: Back to Soul School

Jeffrey Greenblatt May 3, 2010 No Comments

After a nineteen month lay off, aggro-jammers RAQ returned to the scene last Friday night in front of a capacity crowd at the Bowery Ballroom in New York City with

On April 10th, Hidden Track got the unique opportunity to spend the entire day with full access to the Massachusetts based jamband, The Brew as they prepared for their headlining performance at The Music Hall in Portsmouth, NH. The concert – in front of 900 fans at the historic theater – was complete with sit-ins, video projections, a full lighting rig, one extremely colorful costume and eight hi-def cameras to capture it all.

The highlights from the evening included favorites Faces, Radio Swiss, and on the aptly named New Funk, where band members Joe, Chris Plante and Kelly Kane added some great explorations. Dave Drouin’s vocals and guitar work shined on a spot on cover of Boston’s Foreplay / Longtime and The Beatles’ Hello Goodbye with Matt Paine jumping in on pedal steel gave those with less familiarity with the original material, additional reason to cheer. The evening also saw 15-year-old Seth Campbell, resplendent in his Peruvian finery, sit in on First of Things and Eyes of the Giant, but it was his flute work on I Do Believe during the second set that brought the crowd to its feet.

Jeffrey Greenblatt May 3, 2010 No Comments

Apparently not enough hipsters are playing the lottery in Washington state. What better way to hit that key demographic than with a new commercial that features a new untitled track 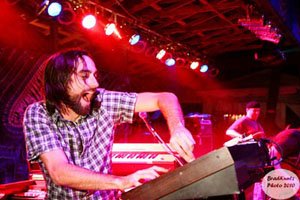 Damon Albarn has said that he has enough new Gorillaz material from the recent ‘Plastic Beach’ album sessions for two sequels to the record. The frontman told Spinnermusic.co.uk that he