Jer and John cover a Lead Belly classic live at a 1986 concert.

While we certainly don’t pretend to be experts on the world of hip-hop around these part, we undoubtedly had to sit up and take notice when two of the biggest

There have been a bunch of ’80s Jerry Garcia Band shows circulating lately, both acoustic and electric. I’ve been digging into 1984, not a year I’m particularly well versed in

On this date 15 years ago we lost the one and only Jerry Garcia at the all to young age of 53. In a search for the perfect video to

Though Daniel Lanois is known more for his work as a producer (U2’s The Joshua Tree, Peter Gabriel’s So, Bob Dylan’s Time Out Of Mind to name a few), he has a few albums of his own, and The Maker is arguably his most well-known composition.

Dave Matthews Band: Dave Matthews has been playing The Maker as far back as 1991. Its frequency has fluctuated throughout the years, it’s even disappeared for periods of over three years, but it keeps coming back in the rotation at both DMB shows and Dave Matthews & Tim Reynolds duo shows. Source: Live In Chicago 12.19.98 at The United Center

Video from the Chicago ’98 Webcast:

Also of note to the Hidden Track readers is that on 10-15-1994 at the Oak Mountain Amphitheater, there was a full-band sit-in where all the members of DMB joined Phish for their encore and after a Drum Duel and a brief Free-form jam, The Maker was performed. Listen to it below. Thanks to hoydog for all he does with the Phish Downloads Spreadsheet.

This has already been a stellar year for Grateful Dead and Jerry Garcia archival releases, but Rhino will up the ante with the next batch of releases set to drop 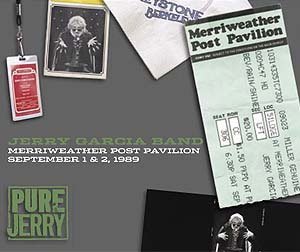 In less than a few short years, the estate of one Jerry Garcia, at least in the vault material department, has upped its commercial status from sleeping giant to roaring juggernaut. This latest, four-disc collection