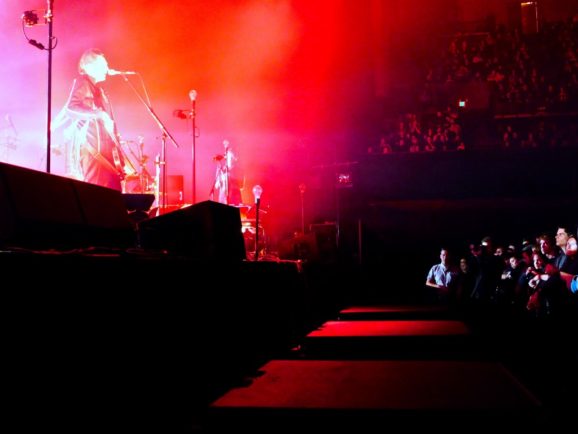 Respect flowed both ways last night, between the individual and the collective, the fans and the band, and after two hours, everyone walked away a little more at peace than they'd been before.

Jonsi teamed up with Cameron Crowe for Gathering Stories.

On August 24 !!! – pronounced Chk Chk Chk for those who want to Google them – will release their fourth studio album and first in three years, Strange Weather

Once in a while a band comes along that so captures the attention of their contemporaries, that the covers just start flowing in. It used to be much more common to cover your peers, these days it’s a rarity. Somewhere along the way it got less cool to cover songs that were released in the past couple of years, but MGMT is one of the bands that seems to have avoided this.

This ALO side project played under the name “Bag Of Tricks” for this gig on 10-29-2009 and featured three members: Zack Gill (Keyboards), Steve Adams (Bass), and Dave Brogan (Drums).

Tracks of the Trade: Peter Katis

Today, we’re kicking off a new column of occasional periodicity here at Hidden Track called Tracks of the Trade, whereby we swap stories with some of the more interesting folks in the music industry, the producers. These folks are the sonic equivalent of surgeons; charged not only with the careful dissection of dozens of tiny interactive pieces and ensuring their cohesive functionality, but also developing strong emotional bonds with their patients (often mental), offering varying degrees of bedside manner, and even sharing potentially critical advice.

To kick off the series in style, we invited one of the most prolific producers/mixers in music today, Peter Katis, to drop by to chew the fat. Peter Katis has collaborated on countless modern classics by the likes of the National, Frightened Rabbit, Interpol, Fanfarlo, Tokyo Police Club, Jonsi (Sigur Ros), and The Get Up Kids.

In thinking about our little surgeon analogy, in a likeness to the way we all go about choosing a doctor, it’s important to understand the mannerisms of a producer. After all, you have to like the person as much as the work. Specific to music, different producers take different positions as to where their role fits in with the musicians.

“I’m on the opposite end of the spectrum than say someone like a Rick Rubin. He really focuses on the songwriting aspect, the arrangements, the words, whereas to me, those things like lyrics for a band, that’s their own thing. I really don’t feel comfortable messing with that.” READ ON…