We keep our eyes peeled for new tour dates announcements each week and compile them on Tuesdays for this handy column… On September 13, quirky funk-rock act Primus will release

I had a horrible nightmare, I dreamed that we went…back in time. It was terrible. Well…We’re safe and sound now, back in good old 2010. We’ve got a nice collection this week, opening up with long instrumental exploration, members of The Grateful Dead, a jamband’s first show in over a year and some topical humor dedication from our friends from down south.

[Thanks to Craig T for this week’s photo]

I often write in this feature about one of Boston’s best kept secrets – Club D’Elf. Another one is Geoff Scott, guitarist formerly of Miracle Orchestra, that heads up Tuesday Night gigs at Atwood’s Tavern in Cambridge, MA. Geoff pulls from a similar pool of musicians that show up at Club D’Elf, and this 20-minute segment of music – which we are all having trouble figuring out song titles for – illustrates what this ensemble is all about. This past Tuesday’s performance featured Mike Rivard of Club D’Elf (Bass, Sintir, Kalimba), Johnny Trama (Guitar), Timo Shanko (Saxophone) and Brian Sayers (Drums). It’s not the most organized pickup jam, so I can’t even point you to a website that tells you when the next gig is.

READ ON for tracks from String Cheese Incident, the Rhythm Devils and Widespread Panic…

There were several factors that set the NWSS apart from all other music festivals I have attended. For starters the grounds of Horning’s Hideout were immaculate. The layout was full of rolling hills, thick forests of lush browns and greens, a streaming river, pleasant lakes, wooded camp grounds, fearless wild peacocks and the list goes on. Every personality I crossed was more exceptional than the next; fans who attended wanted to be there, they were there for the music. There was no seedy scene, no pushy or undesirable individuals, simply people looking to celebrate acoustic music and have a good time. At nighttime the forests echoed with the plucking of strings from varying campsite jams, followed by the hoots and hollers of excited festival goers.

Music wise there was only one stage meaning one band played at a time. There was no overlapping, no running back and forth, no missing portions of sets and no need to leave sets early in order to catch another band. Each band laid down a winning performance making it hard to select a favorite. It seemed that every performance was charged by audience enthusiasm and energy. Bands reciprocated by churning out some of the wildest sets of acoustic music. READ ON for more from Allison on the NWSS…

For a guy who was not all that long ago described as “semi-retired,” Bill Kreutzmann seems to be everywhere these days. No sooner did his BK3 trio peter out than a new band with Papa Mali, 7 Walkers – a fierce little unit spawned from a place where psychedelic Dead meets the spiciest, unruliest New Orleans funk and R&B – came to the fore.

And wouldn’t you know it, neither unit will be Kreutzmann’s main focus this summer. That’d be the Rhythm Devils – Kreutzmann and brother in arms Mickey Hart – back on the road with a retooled lineup that features percussionist and longtime associate Sikiru Adepoju, as well as Keller Williams, singular as ever, bass ace and former Gov’t Mule anchor Andy Hess, and, most intriguingly, Back Door Slam frontman and shredder Davy Knowles.

Hidden Track briefly caught up with Kreutzmann as the Rhythm Devils tour prepares to get underway.

HIDDEN TRACK: You’ve got so much going on at the moment and plenty of projects, from Rhythm Devils to 7 Walkers. What’s top priority these days?

BILL KREUTZMANN: Right now it’s Rhythm Devils, 100 percent. I’m just focusing on that. I like to focus on one band at a time.

HT: Fair enough. You have a new and interesting lineup for Rhythm Devils, for which I guess Davy Knowles is the wild card. Can you talk a little bit about how you and Mickey put this lineup together?

BK: Well, it’s true, when playing with different musicians, the more people you play with it, the fresher it makes it. The driving force in the Rhythm Devils — from the Devils, meaning me and Mickey, — is to have new players. The one we work with all the time is Sikiru, he’s a master drummer from Nigeria, but the new energy with different people is exciting. I’m looking forward to rehearsal.

READ ON for more of our interview with Bill Kreutzmann… 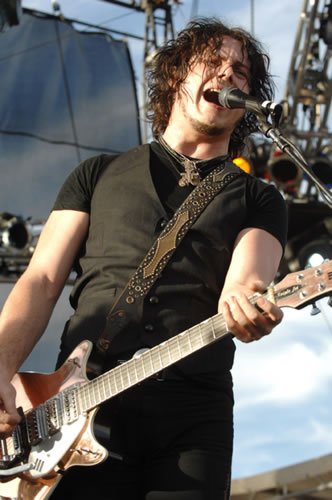 Vegoose 2006 won't be remembered in the annuls of music history, or even for Halloween's sake, but it will be remembered for being a crazy weekend, one to mark on your calendar for 07. It's a hell of an excuse to hit Vegas every year, if it was anywhere else, chances are you'd make those early shows.