Cover Wars: You Can’t Always Get What You Want (The Rolling Stones)

Vote for your favorite version of this Stones classic.

December 31st is the biggest night for live music of the year. An argument might be made for Halloween, but I’m not buying it. Your non-live-music-loving-friends don’t say things like, “Halloween is the most anti-climactic day of the year” while you sit there and just snicker. We’ve been a little Phish heavy this week so let’s take a look at how 24 other bands rang in 2011.

Side Note: This was my first time using embedded images from setlist.fm and I must say it looks super slick. That site has really got it going on, I hope the quality of data improves as more people use it, because with better information – statistics like “What songs did LCD Soundsystem play in 2010” will be really useful to have for a wide variety of bands.

Back in 1978, Ed Volker, Dave Malone and a couple of fellow musicians turned a few beers and five hour jam in a garage into a 33 year career together. As The Radiators they played with such luminaries as Gregg Allman, Maceo Parker, George Porter, Jr. and Bob Weir, to name a few, and in such long gone NYC venues as The Ritz, Tramps and Tobacco Road. Along the way, fellow musicians became brothers and fans became family as the Radiators became affectionately known as “The World’s Best Bar Band”.  Playing two packed evenings at Sullivan Hall, fans from as far away as Boston and Washington, DC came to share in what was expected to be one of the final appearances for beloved keyboardist “Zeke” and this lineup in New York City.﻿

Treated to a mix of covers from The Beatles and Van Morrison and personal favorites of their own, many of the songs including How Do You Feel, Funeral March and The End Is Not in Sight were filled with deeper meaning and tinged with both euphoria and sadness in a truly New Orleans way. Even the final song of the run, Train Kept A Rollin’, spoke to the future of the band and its remaining members. Even if you’re not one of the loyal Fishheads, we suggest you check out one of their New Year’s run shows in Ardmore, PA or as a real treat, their final appearance at the upcoming New Orleans Jazz & Heritage Festival on May 8th.

Set 1: Tuning – Intro, Sunglasses On, Between Two Fires, Oh La La, Domino > All The Good Ones Are Gone > Everybody’s Got Something Hide Except Me & My Monkey > Linin’  Track > Domino, Falling Through The Bottom Line, Danang, Daddy’s Coming Home, Grief Snafu, Good Things, Going Up To The Country, City Of Refuge, Outro

Set 2: Tuning – Intro, Down By The River, Circus Life, The Man Who Lost His Head, Honey Bee > Keep On Popping That Shine, Hide You Love Away (false start), Hide Your Love Away, Number Two Pencil, Fools Go First, Lovely You, Kenny’s Call Em’ Back, St. James Infirmary, Party Ain’t Over Till I Say It So > Whole Lotta Shakin’, Outro

Set 2: Tuning – Intro, Brown Eye Girl *, March On Down To Valentine, Gimmie A Rainbow That’s For Real, I’ve Got A Feeling > Midnight Special  > I’ve Got A Feeling, Empire Getaway, Where Is The Soul Of The World ?, Lila, The End Is Not In Sight, Soul Kitchen, Kenny’s Call Em Back, Ride Captain Ride, Train Kept A Rollin’

READ ON for more of Jeremy’s shots from this show…

Best of Cover Wars: On Your Way Down

On Your Way Down was originally released on Allen Toussaint’s 1972 album Life, Love and Faith. It’s OK if you thought this was written by Little Feat, because a lot of people do. Little Feat recorded their studio version just months after Toussaint and put it on their record Dixie Chicken.

Elvis Costello & Allen Toussaint: I’m always torn on whether or not to include tracks like this in Cover Wars. That is, covers that also feature the original recording artist. But in this case, Elvis Costello handles the lead vocal duties for the duration of the song, plus it’s an amazing take – so it would be a shame not to include it. If you’re not familiar with this CD/DVD, it’s amazing – would make a good holiday gift. Source: The River In Reverse

CW: You Can’t Always Get What You Want

You Can’t Always Get What You Want is the closing track on the 1969 Rolling Stones album Let It Bleed. Regular readers may remember we did our first Stones song edition of Cover Wars two months ago when we took a look at covers of Can’t You Hear Me Knocking.

There are some very interesting quotes regarding the drumming on this track included in the book According to the Rolling Stones,

you can see the page in question over at Google Books (what an amazing resource).

Aretha Franklin: This cover comes off a 1981 Aretha Franklin album that universally gets bad to lukewarm reviews. The arrangement is very 80’s. Still, it’s worth a couple minutes to hear the Queen Of Soul sing lead on this tune. Source: Love All The Hurt Away

Last Week’s Sauce is a recurring column featuring recordings of shows that took place the previous week. Thanks to ScottT for this week’s photo.

The Decemberists are out on tour and playing their new album Hazards Of Love in its entirety. This track is, of course, off of that album. They are in the middle of a tour and they play tonight in Kansas City. 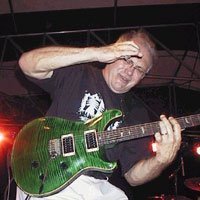