Peter Frampton is htting the road with a bevy of guitarists

Deer Tick will play many of their albums in their entirety at Brooklyn Bowl next month.

Tour Dates: You Can Feel Good About Patterson Hood

Patterson Hood sure likes to keep busy. After releasing albums in back to back years with his full time band the Drive-By Truckers, the front man for the hard touring

A look at the tours announced this week including Billy Bragg’s Guthrie tribute.

Each week we round up tour date announcements from the past seven days in this handy column.

We keep our eyes peeled for new tour dates announcements each week and compile them on Tuesdays for this handy column… While still remaining active over the last few years,

The 10th annual “Strummit” ran July 21-24, 2011 featuring over 15 bands on one stage, including three three-hour headlining sets by YMSB. This year marked the largest Strummit yet welcoming: the first official Thursday opening, the Cascadia Coffee House, a new forest hollow acoustic stage, free late night sets and an official Kinfolk Hall of Fame induction. Between the rolling green trails, sky-scraping trees, peacocks and endless acoustic jams the NWSS was truly a picker’s paradise that can only be summed up as “You had to be there.”

The gates to bluegrass Eden opened on Thursday, July 21 to the tune of Pete Kartsounes and Benny “Burle” Galloway. At dusk the evening turned into a Midwestern jamgrass haven featuring Chicago’s Cornmeal followed by Greensky Bluegrass from Kalamazoo, Michigan.

READ ON for more from Northwest String Summit… 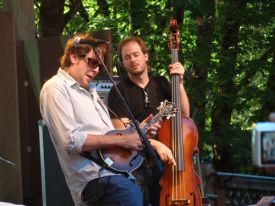 When an annual musical event crosses over the “decade” line of yearly operations, it moves from to the status of a festival to the status as a summer music institution. The Northwest String Summit, which takes place at Horning’s Hideout near Portland Oregon from July 21st-24th, is about to cross that threshold to become an institution and solidify its’ status as a must see event for any fan of bluegrass music and a great time.