Much has changed for the Black Crowes since I last reviewed them for Glide during the first and last shows of their reunion run at Hammerstein Ballroom two years ago.  After reassembling their classic mid-90s lineup (by adding drummer Steve Gorman) during their subsequent homecoming stand in Atlanta, drugs and egos seemingly reared their ugly heads again.  Blues virtuoso Marc Ford once again left the group, citing a need to get his life back together and keyboardist Eddie Harsch was summarily dismissed for "personal problems."  In their places now stand Paul Stacey and Adam MacDougall.

Having just completed their first studio album since 2001’s Lions, the revamped Crowes were on display last Thursday.  The show could be best described as uneven.  The setlist contained all the hits necessary to sate the beer-swilling crowd (myself included), but the performances were a bit choppy.  "No Speak No Slave" segued into one of my favorites, "Gone," the opening track from Amorica.   However, the powerful intro was replaced with something far more tentative.  In fact, after being so ecstatic when they opened the Hammerstein run with it, I wasn’t even sure what song they were playing.

Chris Robinson’s voice sounded strong enough, but there were times where he sang at his own private speed (or lack thereof).  Possibly, he was enjoying "the greenery" in the park a little too much.  During "Soul Singing," which no longer has the breakdown jam in the middle, he was seemingly stuck in the mud while the rest of the band was trying to pull him out.  They did do the aforementioned jam and reprise in "My Morning Song," which featured some typically strong playing by Rich.  However, the jam, with a snippet of "Good Morning Little Schoolgirl," sung by Chris, was completely detached from the song itself and therefore carried none of the momentum into it.  Friend, producer and now second guitarist, Paul Stacey, much maligned by message board dwellers, sounded fine enough.  He won’t make anyone forget Marc Ford, but he wasn’t bringing the band down on this night.  Chris Robinson’s mellowness worked best on tunes like "Sister Luck," "Sometimes Salvation" and "Downtown Money Waster," during which Luther Dickinson of the show-opening North Mississippi All-Stars joined in.

Dickinson, who is featured on the upcoming studio album, gave the band a little kick in the ass.  They segued into "Thorn In My Pride" and although he made them sound a little more "countrified," he served as a much-needed catalyst to get the band clicking.  Adam MacDougall didn’t really impress on keyboards.  His solo on "Wiser Time" sounded a lot like my nine month old daughter Sarah’s tinkering on her toy piano.  That’s not to say I don’t love it when she plays it, though.  No one was surprised when "Remedy" closed out the show, especially since the venue has a 10:00 curfew.

I truly admit that the band would honor 12-year anniversary of Jerry Garcia’s passing during the show.  Therefore, I was understandably bummed when they encored with Peter Green’s "Oh Well."  However, the tune cooked and my only complaint was that it was so short.  It also made me think of what I was missing all night.  I am sure the band, whose history has left more wear on their tires than their age would indicate, will break out more of the "big guns" from the songbook for their return to Manhattan on All Hallow’s Eve.  Let’s just hope that the "The most rock n’ roll band" in the land finds their stride once again before then.

WATCH: The Black Crowes Take On The Temptations’ “Papa Was A Rolling Stone: On ‘Jimmy Kimmel’ 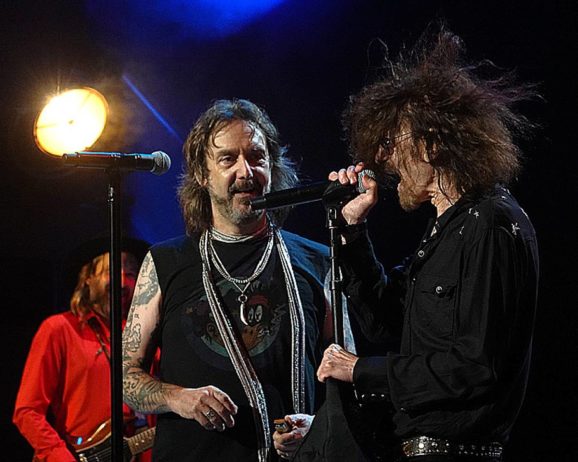