Is the LP finally dead? The most intriguing element of the Pixies’ newest album Indie Cindy may prove to be its release

style. The album was offered originally as three separate EPs, released four songs at a time across a six-month span. This method allowed the band to stay relevant before ultimately compiling those tracks for this new LP. All of the songs were recorded together, and the band knows most fans will have them already — as a result, the group is packaging the results in a number of styles, including a tacked-on full live show from their recent tour, available with some offerings.

Had they simply dropped the full LP, would there have been a bigger appeal/excitement for these ’80s alternative icons? Did the slow rollout help with sales, expectations and marketing? Contrasting the Pixies’ gradual approach with My Bloody Valentine’s release style, which was more effective? Great questions for the music industry in general, but lets talk about the music itself presented here.

Indie Cindy is a mix of the EPs with a blended tracklist, creating a new experience when listened to straight through. Two of the strongest tracks open the album: “What Goes Boom” pushes and pulls the six-strings of Frank Black and Joey Santiago, with “Greens and Blues” reminiscent of the band’s original output (minus Kim Deal’s iconic backing vocals). “Andro Queen” is another album highpoint, with its multiple layers of keys, sweeping guitars, and vocals all held together by the drumming of Dave Lovering.

The LP sags in the middle with “Bagboy” (which has felt disjointed since its first release last summer), while “Silver Snail” gets spacey and odd — but not in a very memorable way. “Indie Cindy” plays with the group’s patented loud-quiet-loud formula, mixing dirty with pretty and Black’s distinct quirky lyrics.

“Blue Eyed Hexe” has a big radio-friendly riff and chorus; the rocking “Another Toe In The Ocean” keeps that mainstream rock vibe alive, while “Ring The Bell” has an upbeat, digital New Wave feel to it. Closer “Jaime Bravo” stays positive, with Black exclaiming that “Its so nice/in the sunlight/It feels right” before wishing listeners a goodbye.

This new release method may or may not be successful — either financially, artistically, or cosmically successful. Other   established bands are trying similar tactics. But in the end, the music triumphs over the method. Pixies fans probably already have their opinions on these songs, but the totality of this collection helps the tracks wash over. While not as soaring of a success as the band’s early masterpieces, Indie Cindy holds its own in the Pixies’ catalogue. 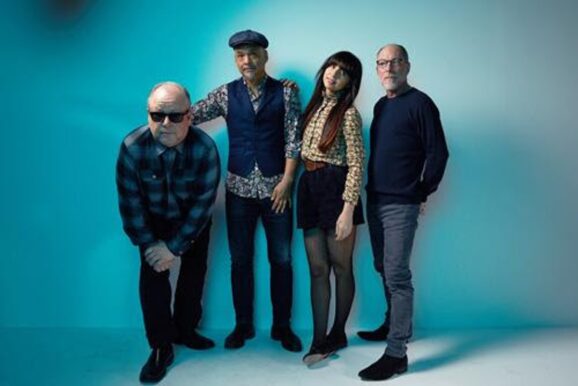