SPOILERS ABOUND, so don’t screw around…

In this week’s episode, nothing is what it seems — from a baby with unclear sexual organs to Bill and Virginia’s expanding fictional life as Dr. and Mrs. Holden. In one night, we find out more about Bill’s past and watch as his relationship with Virginia gets grayer.

We open with Virginia at home with her kids (the first we’ve seen of them this season). Virginia has a talk with her daughter about fairy tales — her daughter is focused on the traditional prince saves princess storyline. Virginia encourages her to expand the possibilities with little success.

She ends by saying, “You like [fairy tales] because you like to know how things are going to end.” (This fairy tale discussion plays well into the overall theme of the episode, as Virginia must consider the “fairy tale” she’s been creating with Bill.)

Next, we see Bill delivering a baby at the hospital. The baby is born without clear genitalia, which is confusing and upsetting (especially to a 1950s family). Bill runs a blood test that shows the baby is biologically male.

He goes to talk to the parents, suggesting they wait at least a few weeks for surgery since operating on a newborn is more dangerous. The father is quite upset and doesn’t even want to hold “it.” He’s immediately concerned with his child’s sex life and doesn’t want a son who won’t be able to “perform in the bedroom,” and he tells Bill he’d rather they just cut off any male parts and make the baby a female.

Bill doesn’t agree. The father gets more heated and makes emasculating comments to Bill about his abilities and manhood — Bill tells him to calm down and wait a few days, that he might feel differently.

That night, Bill and Virginia meet at their hotel room. There’s a big boxing match on TV (the real life 1958 match between Archie Moore and Yvon Durelle). Bill seems to be in an odd mood (due to the situation with the baby and the baby’s father). When Virginia goes to take a shower, Bill follows her, and they roughly have sex against the wall.

Afterward, Virginia tries to call him on it, noting how unlike him it was. He tells her about his day and the baby, admitting he’d never seen that situation before but had studied it in school. He explains how doctors often choose to make babies in this situation female because it’s easier to do surgically, but it’s not always the right thing to do.

As the night continues, it’s clear they have formed a routine playing the married couple for each other and the hotel staff. Virginia orders food and references Bill as her husband on the phone (even making a joke about how he likes his steak). As the boxing match continues to play in the background, we learn that Bill knows quite a bit about boxing — and that he even boxed in boarding school. Virginia pushes him about why he took it up, but Bill gets frustrated as she asks more questions about his childhood (something we still know little about).

When the room service shows up, Bill talks with the waiter (Elliot) who has obviously become familiar with them. Virginia listens to the various lies and stories Bill has made up about their lives as the fake Dr. and Mrs. Holden. She wishes they were a little more imaginative.

When Elliot leaves, they begin to discuss this fiction they have created, also splicing it with facts from their past. For example, Virginia reveals her mother is in prison. This, perhaps inevitably, leads to another round of sex.

Afterward, they continue to float in and out of their fantasy life and real life. Virginia makes up a sexual history for this Mrs. Holden, but it seems the story she tells has some truth to it. She talks about having sex and falling in with an army captain, who, after a year, left her to marry his fiancé — which he mentioned only once. She warns: “Keep your heart out of it.” This banter that falls in and out of fiction let’s them both say things they wouldn’t say otherwise.

Throughout the episode, we keep getting glimpses of the baby Bill delivered going through the normal hospital procedures: photo, measuring, etc. A doctor — one we haven’t seen before — is preparing the baby for surgery.

Back at the hotel, Bill and Virginia are watching the fight and discussing the “conversation” of boxing (which is the whole metaphor for the episode). Bill attempts to explain the body language of fighting to Virginia, which results in them pretending to fight and trying to dodge each other’s punches. After one swing, Virginia’s bracelet gets caught in Bill’s hair, and they end up having to cut Bill’s hair with a steak knife to get it free.

Later (using scissors from the front desk), Virginia trims Bill’s hair to even it up, and he begins to talk more about his father. He explains how his father took him to boarding school in New York City and treated him to his first shave. But he also talks about how his father was always good at doing the unexpected (like a good boxer): One minute, he would be a loving father, taking his son for a shave; the next, he was dropping Bill off at school, saying he wasn’t allowed to come home again. “It’s time you take care of yourself,” he was told at age 14.

Bill says how he never went back but admits that he thanks him. That experience him the man he is today. (But is that a good thing?) He then throws in how his father once broke his nose — but doesn’t give any more details.

Afterward, they are back to discussing the boxing match and getting dressed. “Is there always a clear winner?” Virginia asks. (This again connects to everything they’ve discussed and done throughout the night.)

She then pushes about how his dad broke his nose. Bill tries to play it off and says, “What difference does it make?” He then confesses it could have been anything: He slammed a door, took a second helping of food, or maybe it was just Wednesday.

Virginia asks if there was anyone there to stop the abuse. Bill says he could have stopped it at anytime. His father always told him, “Get down on your knees and beg for mercy, and I’ll stop.” But Bill never did.

Back at the hospital, the surgery on the baby is underway. The surgeon is asking for a book and looking at it as he works (showing he doesn’t do this often).

At the hotel, Virginia briefly talks to her daughter on the phone as she puts Bill’s wedding ring (which he left on the nightstand) on her finger. When he comes out of the bathroom dressed, Virginia mentions how boxing looks almost like love. (Get it? Get it?!)

They are ready to go, but before they do, Bill says, “This is where a married couple would kiss.” Virginia smiles and moves away as she says, “Don’t forget your watch by your wedding band.” But before they go, they scientifically describe their night (because this is for research purposes, of course).

Before leaving the hotel, Bill calls the hospital from the lobby to check on the baby and is told about the surgery. He rushes to the hospital and confronts the father, thinking there is time to stop it. “Let him be what he is,” he begs. But it’s too late — the surgery is done.

As Virginia is leaving the hotel, she hears people cheering in the hotel bar and goes in to see. A man asks her if she’s a boxing fan and she responds, “I just want to see how it ends.”

This episode had all the potential to be great, but it didn’t fully deliver. As a viewer, I always enjoy really focused episode like this, which was about one night between Bill and Virginia. But for everything good (Bill’s father issues more fully revealed), the episode needed a splash of Mad Men-styled subtlety. Having the fight play in the background worked well, but having them so blatantly connect it to everything they were saying over and over again was like being hit over the head with the metaphor. Look, we got it.

I did, however, enjoy the incorporation of gender issues and complications, which worked nicely into the story. After this week, we can see that both Bill and Virginia are getting in over their heads — soon, their fictional life won’t be enough.

Bill laughing during their pretend fight. He so rarely laughs or smiles.

Bill’s final scene with baby’s father was powerful and layered. 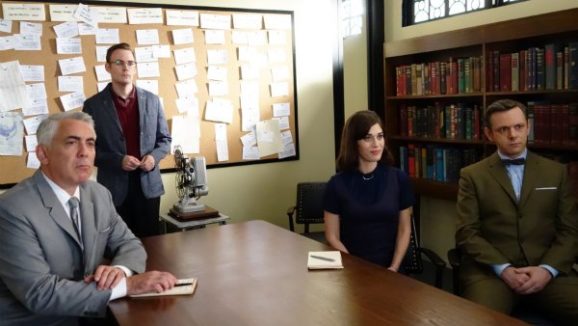 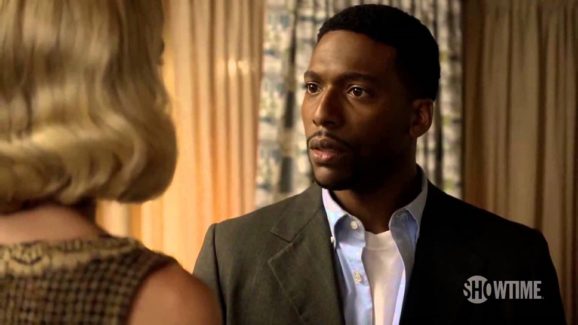 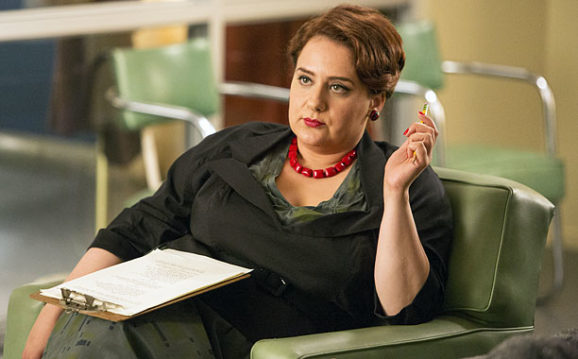