If there’s an underdog pick for album of the year so far – Plants and Animals’ Parc Avenue deserves some consideration.  The Montreal band, originally an acoustic/instrumental roots acts has grown into an expansive rock pop engine of epic anthems and ballads, much like fellow Montrealers Arcade Fire.  We emailed wise guy drummer Matthew Woodley a few questions…just don’t call him “hippie.”Parc Avenue has been out for a few months now- has the album met your expectations?

The album took us two years to make, on and off, messing with a lot of things, throwing out a lot and trying a lot of ideas. There eventually came a point where we decided it was finished. Then we got a record deal with a great label, and, while they worked on putting it out, we started looking for a celebrity endorser. We’ve called a lot of celebs. So far: nothing.
What items of criticism or praise have you gotten the biggest kick out of so far?

As a three piece what challenges are there with constructing complex music that isn’t exactly straight-forward rock, with movements and climaxes mixed amongst ballads and anthems?

The biggest challenge has always been – and will remain, as far as I can see – to stop Nic, our guitarist, from bringing a big band in to record with us.

Do you feel being a Montreal band hurts or helps you out these days following the big publicity surrounding the city’s music scene in 2004/2005?

It helps, I’d say. People still talk about the Montreal music scene, even though, lord forbid, it’s not 2004/2005, and I think that’s because there’s still a lot of music coming out of there. There’s still a lot of music going on in there. There are lots of musical people, lots of great places to play, lots of people who go out to see music. So if that helps people pay attention to bands coming out of the city, well let’s have a party

If we only had five minutes with Parc Avenue, where should we go?

If you look on the inside cover at the photo of Parc Avenue, take a right and go down to the lights, to the corner of Parc and Bernard. Turn left on Bernard. Then your first door to the left is Restaurant Nouveau Palais. Go inside and say hi to Linda.

Andrew Bird: the man can whistle. 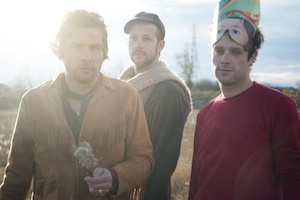