September 29, 2014 by Scott Sheff in Concert Reviews, Reviews No Comments 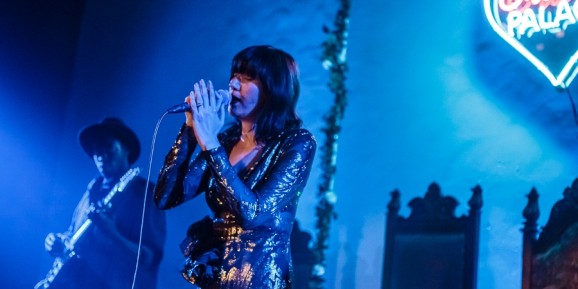 On a hot, muggy night inside a solemn Masonic Lodge at Hollywood Forever Cemetery, a sophisticated, eloquently-dressed Karen O walked slowly from the back of the room to take the stage amid near silence.

While many may know O more for her flashy outfits and outgoing persona as lead vocalist of the rock group Yeah Yeah Yeahs, she showed off a softer, more reserved side with an intimate set of songs off her debut solo album Crush Songs.

The venue’s cozy quarters filled with dark wood beams, wrought iron fixtures and a line of thrones along the back of the stage was the perfect backdrop for the stripped-down acoustic set. Throughout the night, the crowd seemed to respectfully mirror O’s energy on stage, remaining tranquil and relatively motionless as O poured her heart and soul into the predominantly mellow, peaceful songs.

But as the set progressed, O seemed to loosen up a bit with more up-tempo songs and interaction with the crowd. In turn, the audience, too, became more vocal and relaxed once the mood on the stage changed. 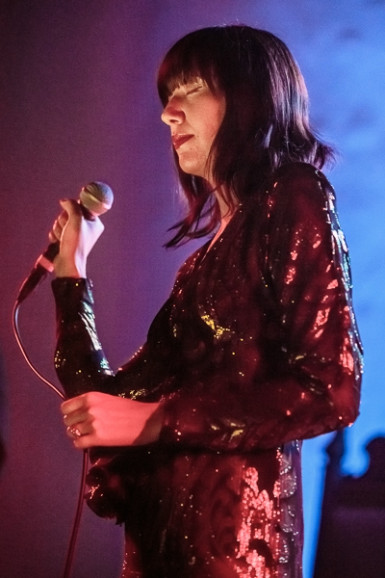 The turning point from wake-like to that of a live concert came about three-quarters way through the set when accompanying guitarist and vocalist Moses Sumney performed “San Fran” solo, introducing many in the room to his extraordinary range on vocals. Once Sumney belted out the last note, the crowd erupted into a roar of approvals and broke the mostly subdued behavior displayed up until that point in the night.

Following Sumney’s solo performance, O returned to the stage to sing “King,” a song that pays tribute to the late Michael Jackson. At one point in the song, O held up her right hand to display a white sequined glove ala the King of Pop, resulting in a boisterous response from the crowd. From here on out, O would appear more relaxed and less formal on stage in comparison to the early portion of the set.

O continued to keep things upbeat to close out the set, showing off the ability to vary the pace on songs like “Body,” “Native Korean Rock” and “Day Go By.” While O was backed by Sumney and the extremely talented Holly Miranda throughout the night, she was joined by TV on the Radio’s Imaad Wasif on “Day Go By” to add a third guitar to the mix and take the song on a rollercoaster ride up and down before its big finish.

After the set, O was all smiles as she walked through the cheering crowd to exit the room, a stark contrast from the stoic facial expressions she displayed at the beginning of the night, but also reflective of the set itself from start to finish.

With the crowd loosened up and the mood more upbeat, Miranda returned to the stage to perform an ever-so-brief cover of Radiohead’s “High and Dry,” showing off her powerful and breathy vocals. She was soon joined by O and Sumney to perform “Singalong,” a song O wrote when she was a “young” 27 year-old after a late night in a New York hotel.

While the last song of the night returned the tone back to very mellow, the mood was broken when O forgot the lyrics to “Moon.” As embarrassing as that may be, she was able to laugh it off when she asked the crowd: “Does anyone know the next word?” Admittedly she acknowledged: “I know, very unprofessional of me.” Everyone seemed to get a chuckle out of it, especially when someone from crowd shouted “Google it!” before she gathered herself and finished up the song with grace.

About the author: Scott Sheff