And another drifting away, in the midst of all of this technological wonder was a little 44-million dollar 2002 film that could, but didn’t seem to find its cinematic legs. Soderbergh was riding the wave of success of his Ocean’s franchise, while also directing Traffic, which would garner him Oscars. Not that that distinction is important. In fact, often, the L.A. power brokers don’t even know how to nominate the right film, let alone award it for its valor and merit. (I have no idea what it means for a film to have valor and merit, but it sure sounds good in some respectful and non-trite way.) Anyway…I’m not here to lecture, but to tell you that the Russian and American versions differed from the novel, and from each other. Which is good because who wants to see the same film, telling the same story? Yes, both touch upon the dramatic reunion of confused husband and dead wife like most classic Disney films, but they differ in one key area. To Tarkovsky, in his landmark 1972 version, Solaris, the planet itself, was an ocean of wonder and mystery, and served as an intellectual and spiritual companion on one’s metaphysical journey. To Soderbergh and Cameron, Solaris is an opportunity to focus on a love story between two people, and what one will sacrifice and, ultimately, believe to sustain that love.

Without beginning, or end, both films open and close with the mystique surrounding the planet called Solaris. What is fascinating about both films is that the various space travelers/scientists/psychologists/cosmic astronauts don’t understand what they are experiencing. George Clooney plays a psychologist who lost his wife Rheya, played by the exquisite and ethereal Natascha McElhone, to suicide. Both actors are asked to play very difficult roles—Clooney must channel the frustrated child in all of us, who neither understands, nor can ever understand that which hovers over us, but never communicates in a language we can interpret. McElhone must play a version, a copy, if you will, of herself, several times over, because the ex-human being is, actually, conjured up from the memory of Clooney’s character by the round god-like planet, with all of its supernatural power over numerous dimensions, known as Solaris. Got that?

To be, always be—that is the question here. How does one deal with eternity? Cosmic tic-tac-toe on a scale one cannot imagine, or does the challenge of maintaining and juggling order on many levels, within numerous dimensions, satisfy the Eternal One(s)?

And not knowing what to do next—that is an even heavier situation. We’ve all been saddled with TOO much downtime, and, oh boy, what to do, what to do…but if idle hands makes its way into the devil’s workshop, does an idle mind, with only the memories and weird nightmare dreamscapes of a lesser being, a mortal, a human being, go mad itself, and seek companionship with aforementioned lesser being?

Trapped in time, with nowhere to go, and nothing to do, the Eternal One, the being, or being occupying the cosmic soup that is a planet called Solaris gets…wait for it…lonely. Or, is it trapped in time with something to do—share its great gift of existence with all?

And fading into the mists of history, is that little dark horse of a species, an also ran, no doubt, that stumbles upon the magic existence of Solaris. And what Soderbergh and Cameron achieve, with the weighty acting of Clooney and McElhone in two distinct and vastly different roles, is the sense that one can communicate with a higher life form without words, but with a peaceful gesture of love. What Clooney is willing to give up to keep the mere shadowy existence of his dead wife alive is a profound statement of hope and faith, a defiant act against ambition and accomplishment, and a true grasp of something that many cannot comprehend: that crazy little thing called love IS enough.

A glimpse of blissful eternity…both films—the original Russian version, and the American film made 30 years later—offer a peak into what could be if we all stopped talking so much, and just held on to what was right and true and important in life. I heard a lyric in Murder in the City at an Avett Brothers gig the other night, “Always remember, there is nothing worth sharing like the love that let us share our name,” and, you know, in these ridiculous times we live in, that ain’t too bad of a message.

(Yeah. I know. If you think I’m forgetting about mentioning actor Jeremy Davies, who co-stars in the American version of Solaris as a truly fucked-up passenger on board the Starship Bat Shit Crazy, you just need to tune in to the next edition of Hidden Flick, which will cross the line between the gawk ‘n sell crap tube—Davies’ exceptional role as the time-traveling physicist, Daniel Faraday on “the Greatest Television Show Ever,” LOST—and his many surreal roles on the large cinema screen. An extraordinarily unique actor. All will be discussed in yet another special edition next time on Hidden Flick…) 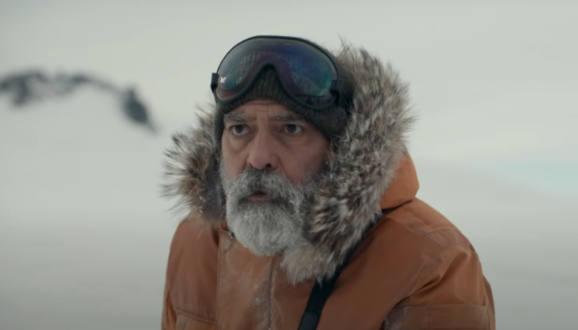 ‘The Midnight Sky’ is Beyond Disappointing (FILM REVIEW)