The Beatles Delight With Hits & Videos on ‘Beatles 1+’ (ALBUM REVIEW) 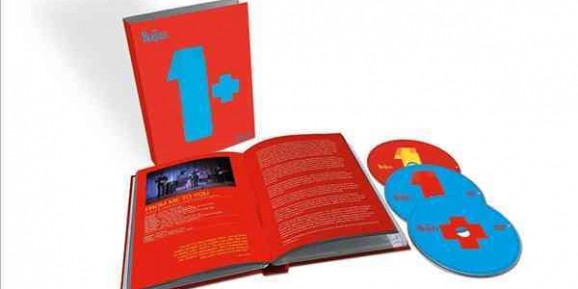 Sliding off the crimson and electric blue slipcase from the hardcover book in which the Beatles 1+ discs and book are enclosed is testament in itself to the scrupulous attention afforded the work of these cultural icons. But taking just a cursory look beyond the matching suits and ties that replaced their equally stylized black leather garb as favored during their club days in Hamburg Germany, a telling, fundamental aspect emerges, symbolic of the blinding speed of their career arc: the Beatles are in constant motion as they play.

The group itself so embraced the deeply infectious quality of their music, it only stands to reason the world at large would do the same. Yet as early as 1964, with the feedback that opens “I Feel Fine,”the Beatles moved beyond mere performance presentations into more abstract conceptual videos: here Ringo’s astride a stationary bike instead of the percussion tools of his trade. It’s a delightful twist on the know-it-all ironists’, obsessive completists’ and  pure negativists’ notions of the Beatles and their influence over the years that the group were fully aware of how they appeared, more than they let on, even in advance of their self-proclaimed enlightenment in the middle of the decade in which they flourished.

To see McCartney struggle to keep a straight face as he stands right next to Lennon’s knowing broad smile during “Day Tripper” are all the clues a discerning viewer really needs. But when the ears then turn to the ingenious use of harmonium on the flip of the double-A sided single, the arraignment reveals how emblematic was the instrumentation in reflection  of the increasingly complex emotional currents within Lennon/McCartney songs.

Recounts as those included to accompany the production notes there are less important (but only a little less worth reading) than those for the staged performance of “All You Need is Love” broadcast worldwide that summer of 1967. Still,  it’s emblematic of how fast times changed that by later that year that, seeing the Beatles adorned in Sgt Pepper like garb for “Hello Goodbye,”only bare vestiges remain of the winsome joy they exude there alongside Mick Jagger and others as John nonchalantly chews gum while ‘singing.’

The ensuing  live performance of “Hey Jude,” from David Frost’s British TV series (preceded by some familiar and welcome though unexpected jocularity from the group which the host endures ever so patiently), signifies the Beatles’ return from psychedelic realms. A journey more expansively documented on the ‘White Album’ aka The Beatles, released later in 1968, it is here quite neatly summed up in “Hey Bulldog.” one of Lennon’s unsung gems of their later years, along with the hard rock rendition of “Revolution” rendered by the quartet on a bare stage in all its fuzz-drenched, cacophonous glory.

Under the auspices of Beatles’ producer Sir George Martin’s son Giles, and a team of audio/videologists, content  previously included within The Beatles Anthology –along with the found tapes overdubbed at that time for “Real Love” and “Free As A Bird”–reappears here in full and in pristine form simply not possible in its previous editions. In addition, commentary from McCartney and Starr further illuminate the conception and execution of selected videos, with more than a little good-natured hindsight

More importantly, in marked contrast to some footage from the Beatles final project, Let It Be and Get Back, the joy they shared in making music together, as in evidence in the now legendary rooftop mini-concert (as well as the two-man studio collaboration of their chief songwriters on “The Ballad of John and Yoko)”, transcended their fractious dissolution.  While the Beatles never seemed more like four individuals than in the presence of their significant others during the clip for Abbey Road’s “Something,” the bond that existed between them at the pinnacle(s) of their remarkably short time together (give or take seven years) survives in the labor of love focus applied to  1+.Miraculously, or perhaps not given the resonance of the music at the core of this project, Mark Ellen’s introductory essay to the one-hundred twenty four pages of content captures the wonder of it all with down-to-earth, clear-eyed appreciation.

About the author: Doug Collette

Doug Collette wouldn't be the music lover he is today were it not for The Beatles on Ed Sullivan in 1964, The Woodstock Music and Arts Festival in 1969 and a 2001 concert by The Phil Lesh Quintet. Each event elevated him to a greater passion for music, his understanding of which, and curiosity about, grows exponentially each year.