After an incredibly disappointing pilot episode, HBO’s latest no-holds-barred comedy Vice Principals has started to take shape. Having all-but written off the show as a warmed over Eastbound and Down, the second episode came off like the best apology ever for taking too long to set things up.

There are two things the second episode does that the pilot did not. First: it gives Walter Goggins’ Lee Russell more screen time, as well as an appropriately out-of-left-field backstory. Second: it gives us a reason for rooting against Principal Brown, priming both Russell and Danny McBride’s Neil Gamby as loathsome anti-heroes. Both of which were huge issues I had last week.

Starting with Principal Brown, who was presented as a good-natured public servant in the pilot has her true motive revealed. Namely, she’s a cold-hearted taskmaster who has has a reputation for cleaning house and firing faculty in every school she gets transferred to, starting with the sweet old lady who works as the school’s receptionist.

What’s worse, she makes Gamby do the dirty work. He doesn’t do terribly well, and it gives us our first real glimpse of the show’s potential, like when the just-fired secretary trashes Gamby’s desk in tears. This was the moment I’ve been waiting for, and while McBride hasn’t ever displayed a great deal of range, having him play a restrained straight man, even for a scene like this, is pure comedy gold.

Where it really starts to come alive, however, is with Lee Russell. What little we got from him in the pilot hinted at a complexly sinister and purposefully sociopathic character that needed way more screen time. This past week, he definitely got it. From his creepy bow tie to his unsettlingly specific gait when he walks, Russell is proving to be a far bigger commodity as a character than expected, and one that might relegate McBride’s Neil Gamby to the show’s de facto straight man.

For anyone else who was as disappointed with the premiere as I was, you might wanna play catch up this weekend before episode three premieres Sunday night. There’s a potentially great story here just starting its slow-burn. 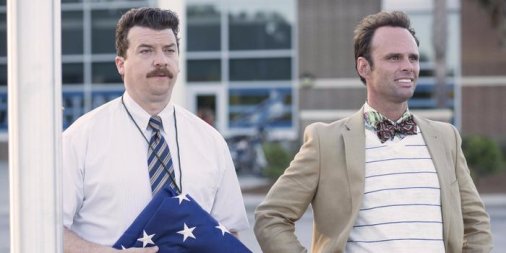