Like the season that spawned it, the finale of Preacher was a mixed bag. Moments of greatness alternated with moments of inanity, all of which was sold well enough by its fantastic cast. In the end, however, both the finale and the season itself offered mostly the promise of potential, rather than delivering on it in full.

All of this felt mostly like foundation laying more than anything, even if it took a roundabout way to get there. As readers of the comics can tell you, the Annville story takes up roughly 6-10 pages of about 1200, so stretching it out to 10 episodes means taking the long way around. Now that we’ve moved past that, perhaps Preacher can finally open up to become the show it so desperately wants to be. For now, though, all we’re left with is a single season of a promising, but still supremely undercooked, show.

Much of the episode scrambled to tie up loose plot threads still hanging from the preceding season, all which was proven moot by the end of the episode. Did we really need to see Jesse and Donnie make nice with each other? Did it really matter that Jesse was in hiding from the cops? As the episode began, these were all pressing concerns, sure. However, as the season ended it was hard for it to not feel like so much tire spinning. It was flashy and looked cool, but that’s about it.

The most egregious example of this was in the ongoing Carlos subplot. We last saw this in the previous episode with Tulip heading out to Albuquerque on her own to take care of the problem by herself. Or so it seemed. After receiving Jesse’s message, she high tails it back to Texas to check in on him and help him out. Only apparently she brought Carlos with her, seated in the trunk of her car. The idea was to make Jesse kill him, to get his revenge.

To that end, we finally learned what happened to make them both so sour on Carlos. The three once robbed a bank together but, jealous of their happiness, Carlos abandoned them mid-heist. The stress of this caused Tulip to miscarry the baby she and Jesse planned to have together. That explains quite a bit of their current relationship and why she was so set on having her revenge.

But did this really need to be wrapped up in a neat little bow at this point in the series? No, it didn’t. And the result was unsatisfying. Jesse and Tulip kick his ass, sure, but it happens off screen. When last we leave him he was alive, barely, so it’s possible this will come back to haunt them in the future. That all depends on whether or not he got out of Annville.

The biggest moment came from the conversation with God. Jesse finally proved the existence of God to his flock, thanks to the video conferencing feature on his angel phone. While everyone else is in awe, however, Jesse smells a rat when he asks about Eugene, who’s still stuck in Hell. “Here’s saved, too,” God says, contrary to all evidence Jesse has.

It’s then that Jesse uses Genesis to ask where God is. “God isn’t here, we don’t know where he is,” says the man at the other end of the line. This apparently does not please the army of heaven, who carry the imposter God away as the phone call is abruptly ended.

The knowledge of a Godless Heaven sends the denizens of Annville into a spiral of sin and debauchery, which begins with Emily playing the church out with “96 Tears” on the church organ. From there, people begin acting on their baser instincts. Sex and violence run rampant as people, given proof of no god, throw their morality into the wind. All of which culminates in the person in charge of plant safety at Quincannon Meat and Power ignoring the warnings of impending explosion as his ball-gagged partner pushes buttons with impunity.

Methane from the plant begins to leak all over town, and a literal powder keg is created. The tiniest spark sets of a chain of explosions that levels the town, killing all its citizens. And just like that, every plot point we cared about this season is gone, leaving only a mushroom cloud in its place.

Sherriff Root. Quincannon. The Church. Everything is gone. Nothing was settled. Nothing was gained. Nothing, that is, except for freedom for the series and its stars. If you’ve paid attention to internet chatter over the last few months, you’d be aware of the talk of “the road trip” from comic readers (usually mentioned in anger at the show’s lack of getting there yet). Well, it’s here now. And with it, hopefully some improvement.

There’s plenty to hope for, as has been hinted at throughout the season. First was the mysterious man in the white suit, who will hopefully be properly introduced next season. Then there’s the talk of the mean old woman, the one who gave Jesse the tattoo on his back which was the same as the tattoo on the arm of the man who killed his father. And finally there’s the cowboy, released from Hell by the angels on a mission to kill Jesse.

So perhaps it’s best to view season one as a necessary evil. It was far from perfect, but it had a big job to do and, over all, it did it well. Bringing Preacher life was never going to be an easy task; comic books readers can afford to set aside their disbelief as soon as they open up a new series. TV audiences are a different beast. The world of Preacher is wild and absurd, and whether we like it or not, a lot of people are going to need their hands held as they wade into these waters. Hopefully, season one got them deep enough to get used to it and the show can let go and be itself. Standing on its own, however, this season was, overall, only slightly better than mediocre. They’re going to need to come back strong next summer in order to really prove their point. 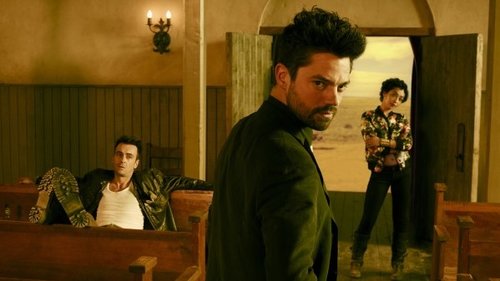 ‘Preacher’ Continues to Ramp Up Towards Conclusion (TV REVIEW)