Oh, to be thirteen again. Those days before life begins to truly stick it to you, before you know better and, though caught in the sticky webs of your own awkwardness, things are, truly, simple. Your adolescent brain, undeveloped and fluid, has little time for the pesky complexities of nuance and maturity. At that age, sophomoric is almost a complement—you don’t know what it means, sure, but it feels like a comparison to those older, cooler kids in high school. You wear it with pride, beaming as your dad rolls his eyes when you, yet again, grab out the package of Hebrew Nationals and ask if anyone would like a wiener. You laugh, uncertain why no one else find this, the acme of your comedic instincts, as funny as you do. “Ha ha,” you say. “Wiener.”

And so it is with Sausage Party, a movie that’s so overly impressed with itself for making the wiener-penis connection that it very nearly charms you into laughing along. Maybe you giggle, in spite of yourself, but not because of any inherent comedic value. No, the thirteen-year-old is just too earnest to ignore, and wiener is kind of a funny word.

Sausage Party is like an homage to the self-indulgence of Seth Rogen, an actor who’s capable of mind-shattering greatness (Steve Jobs, Knocked Up) and spirit crushing mediocrity (The Guilt Trip, The Interview). Restraint is a four letter word as boundaries are pushed for the mere sake of pushing them. How far can they go? How far will we let them? In order of asking, the answers are: as far as they can and fuck you.

Playing out like a sort of hipster’s Toy Story, Sausage Party follows anthropomorphic hot dog Frank (Rogen) as he travels the hero’s path through a grocery store on Fourth of July weekend. Humans are The Gods, choosing those special foods for a place in the great beyond, a land of supposed wonderment and glory. When a jar of honey mustard (Danny McBride) is returned to the store, he returns with horror stories about what actually awaits them in the great beyond. Frank, along with his bun girlfriend Brenda (Kristen Wiig), bagel Sammy (Edward Norton), and a lavash named, well, Lavash (David Krumholtz) must discover the truth behind their life and religion.

For all its metaphysical musings (which, like its sense of humor, have about all of the nuance of a teenager who just discovered philosophy) Sausage Party is little more than a 90-minute excuse to make dick jokes and say fuck, the obvious appeal being that it’s a cute looking cartoon, and they say fuck and make dick jokes. It’s not without moments of hilarity, but those moments stem largely from being browbeaten by immaturity until you succumb to a kind of comedic Stockholm Syndrome.

The film makes no attempt at political correctness, lampooning anything and everything it can think of in its quest to be as offensive as possible. Ethnic foods take on the stereotypes of the cultures they come from—Mexican foods hang out in a saloon and wear serapes while speaking in a Speedy Gonzales-esque lilt, Jewish foods and Arab foods scream at each other from across their aisle, there’s even a character named Fire Water (Bill Hader) who is the embodiment of every Native American stereotype ever portrayed in pop culture. All the while, the movie wrings its hands and smirks, unable to contain its glee at how clever it is.

It’s really not though. The moments of true comedy that poke through feel, more than anything, like an accident. Make enough fart jokes, and one of them is bound to land at some point. The rest of the time the audience is assailed with groan inducing food puns, hackneyed animated call backs to other movies, and oh-so-edgy attempts to push whatever button they can.

Still, there are some bright moments that do work. Nick Kroll’s Douchebag is irresistibly amusing as the movie’s central villain, and the film’s finale (which was unfinished when screened at SXSW) is so ridiculously over the top that it’s hard not to get behind. Those moments are few and far between, however, and the rest feels like the cinematic equivalent of, well, a hot dog. It’s stuffed to the brim with filler and nitrates that, while superficially satisfying, offers you little by way of actual nourishment.

Like a hot dog, Sausage Party is easy to enjoy, so long as you don’t think about the fact that it’s probably made up of assholes. For mindless, surface level entertainment, you could probably do worse. But it’s hard to get over the endless stream of self-indulgence that is this movie. I’ve no doubt that everyone involved amused themselves endlessly while making this film, and for a while that nearly plays. In the end, however, it’s like going to a party where everyone else is having a great time while you stand around thinking about all the better things you could be doing. 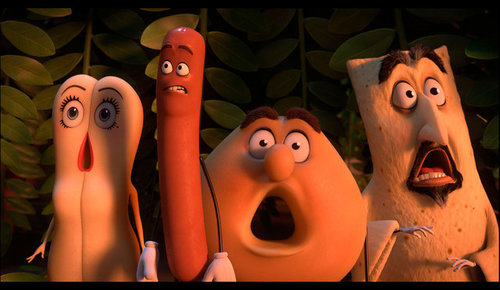