March 31, 2017 by Doug Collette in Album Reviews, Reviews No Comments 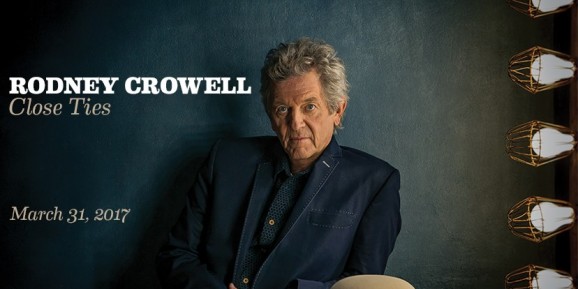 If Rodney Crowell wasn’t so pragmatic about his work, his naturally erudite approach to writing and recording, as displayed on Close Ties, would quickly become pretentious, But as with the stellar Tarpaper Sky record that preceded this latest album, his down-to-earth inclinations ultimately win out,  despite some occasional saccharine moments.

A renaissance man of sorts—he was titular leader of Emmylou Harris’ Hot Band  prior to becoming a contemporary country star on his own with 1988’s Diamonds & Dirt, all before winning a Grammy with via the Yellow Moon collaboration with Harris and writing his memoirs, Chinaberry Sidewalks—Crowell has the challenge of parsing his ideas carefully to determine the proper emphasis. “East Houston Blues,” for instance, has some jarring images in a lyric narrative based on his youth, but the deep steady groove of the band cushions the edge of the recollection(s). “Nashville 1972” suggests what an abundance of history Rodney has to draw upon, but he refuses to sentimentalize or romanticize the litany of people and places he’s encountered, contrary to the borderline maudlin orchestration on this concluding cut.

The haunting nature of the instrumental mix on “Reckless,” including co-producer Jordan Lehning’s spare orchestration, deepens the dream-like atmosphere of the track by avoiding a mawkish mood (if just barely). In contrast to that drummer-less number, the layered arrangement of “Life Without Susanna,” with whispered backing vocals and bouzouki courtesy of Audley Freed, compels perusing the lyrics wisely printed inside the CD booklet to try and ascertain how neatly they fit the internal rhythm of the tune:

The accompanists with which Crowell surrounds himself are as artful with their instruments as he is with his words which is why the guest artists appearing on Close Ties reaffirm the implications of the album’s title. Crowell’s former spouse Rosanne Cash sings on ”It Ain’t Over Yet” as if the voice of the author’s conscience, while Sheryl Crow’s vocal is as seductive as the interwoven acoustic and electric guitars of Steuart Smith on “I’m Tied to Ya.” As deeply as those personae resonate on their respective tracks, the economy of the musicianly backdrop delineates the role-playing all more clearly.

Rodney doesn’t concentrate on narrative to the exclusion of pure personal expression here. The literate exposition of “I Don’t Care Anymore” almost, but not quite, belies his self-awareness, while the direct means by which Crowell addresses the object of his monologue in “Forgive Me Annabelle” reveals a vulnerability rooted in inner strength; it’s quite similar to the way the disciplined production of this album, shared by Lehning, Kim Buie and Dan Nobler, which derives directly from the clarity of the writing. Along those lines, the foreboding air of “Storm Warning” becomes all the more palpable (and open to political interpretations) the longer the band rocks before the spooky breakdown and solo.

Rodney Crowell’s attribution of credit to Buie for finding the common themes in this collection of material is wholly warranted because the continuity that emerges from his compositions makes ruminations such as that of “Forty Miles From Nowhere” all the more memorable, especially as Danny Mitchell’s piano and organ bring the song’s feelings close to home. In all its varied forms, Rodney Crowell’s voice is too personal to mistake for anyone else and too singular to ignore on Close Ties.

About the author: Doug Collette

Doug Collette wouldn't be the music lover he is today were it not for The Beatles on Ed Sullivan in 1964, The Woodstock Music and Arts Festival in 1969 and a 2001 concert by The Phil Lesh Quintet. Each event elevated him to a greater passion for music, his understanding of which, and curiosity about, grows exponentially each year.