‘American Gods’ Veers Off Course, But Keeps The Intrigue In ‘Head Full Of Snow’ (TV REVIEW)

“The only thing that scares me is being forgotten. I can survive most things, but not that.”

Before picking up where last week’s episode left off — more or less — American Gods kept things interesting by taking on some indulgent tangents in its third installment. Rather than start with another “Coming To America” sequence, chronicling how the old gods made their way to the new world, we see the old god Anubis (Chris Obi) visiting a woman, Mrs. Fadil (Jacqueline Antaramian) in her Queens apartment, having fallen to her death and not realizing it.

At first she scoffs at his very presence, telling him that the black family in the building lives upstairs, but Anubis persists, informing her of her death, then showing her lifeless body on her kitchen floor, before escorting her to the afterlife. Weighing her heart on a scale against a feather, Anubis determines grants her passage to the afterlife, but does so by presenting her with five distinct options, making her choose one.

It’s not only a change of pace for the show’s beginning, but the first time we see one of the old gods doing something traditionally god-like. There’s a juxtaposition, too, as Anubis may be a kind and comforting, he nonetheless presents Mrs. Fadil with a difficult choice, a coy reminder that death can be just as complicated as life.

Back in Chicago, Shadow (Ricky Whittle) spends some time with Zorya Polunochnaya (Erika Kaar) on the rooftop, where she sees that he’s given his head to Czernobog (Peter Stormare). Staring at the stars and questioning Shadow’s lack of desire for life, their conversation prompts him to challenge Czernobog to a rematch, egging him on by accusing him of growing weak and unaccustomed to killing with his mallet. Should Shadow win, Czernobog agrees to accompany him and Mr. Wednesday (Ian McShane), and should he lose a second time, Czernobog gets two blows to his head.

“You’re playing the same game, old man,” boasts Shadow, as he confidently takes the win on their rematch, securing Czernobog’s mallet for Wednesday’s quest. Speaking of, Shadow is informed that he and Wednesday will be taking part in a bank robbery to secure more funds to further their mission. While putting Shadow on edge, who’s just been released from prison for armed robbery, it lets him tap into his power, with Wednesday coaxing him into creating a snowstorm — our first real hint that there’s much more to our main character than meets the eye.

This moment, along with Wednesday’s flirtatious courting of Zorya Vechernyaya (Cloris Leachman), and Shadow’s stargazing chat with Zorya Polunochnay each create serene moments tucked inside an episode packed with both plot and exposition that it might have seemed overstuffed if not handled so fluidly.

Speaking of, the moment that everyone will be talking about is the sequence with Salim (Omid Abtahi) and djinn (Mousa Kraish). Salim, a character who’s struggling to make his way as a salesman, wrestling with the trappings of capitalism in America, steps into a cab driven by djinn, who were first saw last week leaving the diner after a conversation with Wednesday.

Their conversation starts on the subject their mutual heritage, and after an emotional connection comes a physical one, which plays out in Salim’s hotel room. While full-frontal male nudity has been prominent throughout the first two episodes, showing a homosexual encounter is nearly unprecedented — particularly one that’s done with the same emotional sincerity that we see in the episode’s earlier flirtatious moments.

Finally, snaking his way through the episode is Mad Sweeney (Pablo Schreiber), still passed out in the bathroom of Jack’s Crocodile bar at first, and quickly finding out that his penchant for luck has bottomed out. He gets a much harsher reminder after accepting a ride from a stranger alongside a highway who’s quickly impaled with a metal pipe that breaks loose from the vehicle in front of them. In the wake of the accident does Sweeney realize he lost his lucky coin to Shadow before their brawl in the first episode.

After tracking down Shadow and Wednesday demanding his coin, Sweeney’s directed back to the grave of Shadow’s wife, Laura (Emily Browning) back in Indiana, where he returns to furiously dig up to her coffin. Only after a frantic bout of digging, he finds that his coin has burned straight through the stark white coffin, where Laura’s body no longer resides.

Even those unfamiliar with Neil Gaiman’s novel likely saw the big reveal coming a mile away, though the moment was played off with some uncertainty. And Laura greeting Shadow with her signature “Hello, puppy” before the credits role was a fitting end for an episode that begins with a portrayal of death as a complicated affair. After all, this is a world where one’s ties to the world of the living don’t necessarily end at the grave. 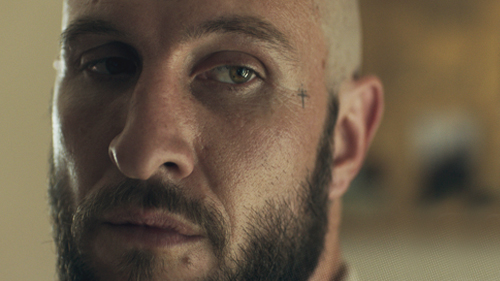