‘The Commuter’ Is A Claustrophobic Thrill Ride (FILM REVIEW)

Michael MacCauley (Liam Neeson) is having a very bad day. Just five years from retirement, he’s laid off from his job, behind on his second mortgage, and left with no idea as to how he’ll pay for his son’s college tuition. If that weren’t enough, he lost his phone.

Then, during his daily ride home on a crowded commuter train, he’s approached by a mysterious woman (Vera Farmiga). She explains that she’s a behavioral therapist, and she can whittle down anyone to a few basic personality types, starting with one simple morality play: would he do something that would dramatically impact someone else’s life if it had no affect on his own?

Then, before abruptly exiting the train, she sweetens the deal by telling him that there’s $25,000 hidden in the bathroom. Should he take the money, and do one simple task, he’ll be rewarded with another $75,000. The task being to find the one person on his train who doesn’t belong. She assures him that this should be easy. He’s an ex-cop who’s been taking this same train for 10 years. He knows the faces (and, in some cases, the names) of the regular passengers.

All he has to go on is that they’re carrying a bag, and they go by the name of Prynne. Once he finds this mysterious outlier, he just has to put a GPS tracker on them. This person’s fate will be left a mystery to Michael, and he’ll find himself wealthier by six figures.

It’s a simple premise, that borrows a bit from both Hitchcock’s Strangers On A Train and Christie’s Murder On The Orient Express, and one that could be written off as a simple cinematic schlock. However, given Neeson’s acting chops, paired once again with director Jaume Collet-Serra, the film ends up being a compelling mystery balanced out with just the right amount of action and intrigue.

In less capable hands, the film could easily devolve into a forgettable mess, but given the talent on-board (pun intended), it ends up drawing you in from the very beginning — thanks in large part to an incredibly creative and nuanced opening sequence. By pulling you into Michael’s world, and keeping you confined with him on his real-time journey, it’s impossible to not become invested in the story — regardless of how often it brushes up against ridiculousness.

It’s part of the fun, really. Ignoring the occasional continuity error and glaring plothole while you find yourself scanning the faces up and down the railcars trying to figure out which of the passengers doesn’t belong. Meanwhile, you move closer and closer to the edge of your seat when it’s slowly revealed exactly the situation that Michael’s gotten himself into.

While it’s likely to get pushed into the background during the re-releases of all the awards-show fodder of late, The Commuter is fantastic cinematic escapism, and a masterfully crafted B-Movie.

The Commuter is now playing in theaters everywhere. 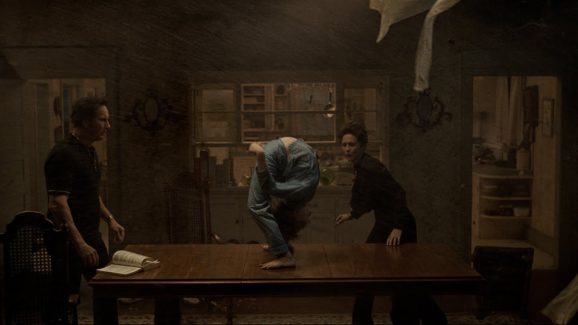 ‘The Conjuring: The Devil Made Me Do It’ Takes the Series to New Lows (FILM REVIEW)