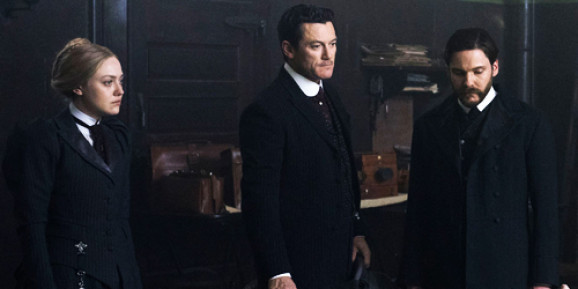 Tonight, TNT’s The Alienist throws its fedora in the ring to draw viewers’ attention in an era seemingly overwhelmed by TV choices. Based on the 1994 novel by Caleb Carr, and set in 1896 New York City, The Alienist revolves around a series of particularly grisly murders, the victims of which are underage male prostitutes.

To solve these unspeakable crimes, police commissioner Theodore Roosevelt (yes, that Theodore Roosevelt — played here by David Geraghty) brings in Dr. Laszlo Kriezler (Daniel Brühl), the titular alienist who’s job is to determine the mental capacity of others, deciding whether they’re better off in jail or a mental institution.

Kriezler’s profession is considered a controversial one, reliant on a young school of scientific thought which — along with his convictions — makes him somewhat of an outcast in social circles. Roosevelt pairs Kriezler with John Moore (Luke Evans), his former Harvard classmate who currently works as an illustrator for the New York Times, to investigate these murders while keeping them a secret from the general public. Joining the two is the ambitious Sara Howard (Dakota Fanning), Roosevelt’s secretary, and the first woman hired by the New York Police Department.

Aesthetically speaking, The Alienist is near-perfect. Shot in Budapest, Hungary to recreate New York’s gilded age, it’s a masterwork of costumes, set design, and cinematography, making the best possible use of its period-piece sub-genre.

As far as the performances, all three leads give compelling life to their roles, though its possible that the show’s slow-burn approach to storytelling may be off-putting to some viewers. This season is slated for 10 episodes, and of the first two, it takes its time slowly moving all the pieces into place. Those gravitating to the series because of Carr’s book might find this surprising, given that its narrative had a considerably faster pace. Those without that pre-existing relationship might find its lack of an immediate hook as an excuse to grab the remote control.

There’s also the issue that much of the story’s intrigue relies heavily on the still-developing world of police forensics, such as a lengthy discussion in the second episode about the emerging theory of the uniqueness of fingerprints. While this was untapped ground back in the mid-90s, the abundance of police procedurals and period pieces in the last two decades has mined this material considerably.

Regardless, The Alienist is a worthy entry in the Peak TV era, with an uncanny eye for detail and cinematic-level production value, there’s clear potential here — particularly for more patient viewers. Or at least those who like to accrue a few episodes on their DVR before a night of binging. Considering the somewhat lengthy history behind adapting Carr’s book, and the show’s painstaking execution, here’s hoping it finds an audience that allows this potential to be realized.

The Alienist premieres tonight on TNT.

About the author: Christian Long

Christian Long is a freelance writer and pop culture obsessive based in Austin, Texas, who reviews movies and TV shows for Glide Magazine. You can also catch his work over at Uproxx, if you're so inclined. You can follow him on Twitter @cuneform.